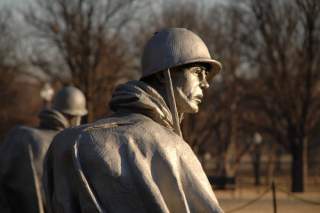 North Korea is likely to be one of the worst headaches, or maybe nightmares, for the next president. He or she “must find a way to neuter Mr. Kim’s outlandish and frightening peril,”  intoned the Washington Post. Of course, four successive presidents have sought to do so. Yet nothing they tried has worked. Experience suggests that “neutering” Pyongyang is beyond the power of the U.S. president, at least at a cost Americans are willing to bear.

The United States should try a different approach. Washington should withdraw from the Korean vortex. Then the Democratic People’s Republic of Korea would be primarily a problem for its neighbors, who have the most at stake.

Washington was blissfully unconcerned about the Korean peninsula until the end of World War II. Earlier relations ended when Japan swallowed the Korean kingdom. Missionaries and independence activists remained busy in America making the case for a free Korea. But the peninsula’s status didn’t much matter to the U.S. government.

Tokyo’s defeat changed that. Although Korea did not directly figure in World War II, that land could not be left with an aggressive empire that was being dismantled. Which put America in the position of joint occupier alongside the Soviet Union. Out of the Cold War came two separate, antagonistic countries, the Korean War, and an American security guarantee, backed by permanent troop deployments.

Yet Washington’s military presence became an anachronism long ago. In the 1960s the South Korean economy finally took off. Today the Republic of Korea outmatches the DPRK on every measure of national power save military, and the latter deficiency is a matter of choice. With twice the population and around forty times the GDP, South Korea could do whatever is necessary to deter and defeat its northern antagonist. Seoul doesn’t do so because America continues to spend the resources and risk the lives of its citizens on the Republic of Korea’s behalf.

That made sense during the Cold War, but no longer. Without such a global struggle the peninsula no longer is important let alone vital for U.S. security. A war there would be costly in economic and tragic in human terms, but the burden would mostly fall on surrounding nations. Most important, the South is well able to defend itself, at least from any conventional threat. The United States is militarily stretched, economically embattled and fiscally endangered. It no longer can afford to subsidize the defense of prosperous and populous friends.

Absent its military commitment to the Republic of Korea, America would be of no concern to the latest Kim scion to rule over the impoverished land to the north. As it is, scarcely a week goes by without a new insult or threat emanating from Pyongyang directed at America.

For instance, Kim Jong-un was recently quoted expressing his “great satisfaction” with the test of the midrange Musudan missile, which offers a “powerful means of attack” to help protect the DPRK from “hostile forces,” including the United States. As a result, he explained, “We have the sure capability to attack in an overall and practical way the Americans in the Pacific operation theater,” apparently meaning to target Washington’s many bases.

Even more dramatic have been tests, most recently in April, on a long-range missile capable of hitting North America. The weapon probably isn’t capable of targeting anything in particular, but further tests likely will improve its accuracy. This work has no value for a conflict on the peninsula or even nearby. It is useful only for threatening the United States.

At the same time the DPRK is thought to be expanding its nuclear capabilities. The Institute for Science and International Security recently estimated North Korea’s arsenal at thirteen to twenty-one weapons. It may be adding four to six weapons a year.

Yet North Korea’s threats do not occur in a vacuum. Pyongyang is targeting America with weapons as well as rhetoric because America is over there. Kim does not spend his time denouncing Mexico or threatening to turn Toronto into a lake of fire. He does not vilify Europe at every opportunity. Brazil and Nigeria do not make Kim’s enemy list. If Washington were not threatening his nation with war, backed by forces based only a few miles south of his country and around the region, he wouldn’t waste his breath on America. Which creates yet another reason for the United States to bring home its forces.

Of course, this doesn’t mean Kim Jong-un is a victim or innocent. His grandfather, Kim Il-sung, took power courtesy of Joseph Stalin, one of the greatest mass murderers of history. This Kim sought to conquer the South, which resulted in millions of dead Koreans. He went on to create a suffocating totalitarian state with a personality cult that Stalin would have admired. Kim’s son and successor, Kim Jong-il, was, if anything, more callous, presiding over the mass starvation of his people while developing nuclear weapons and spewing threats far and wide. Kim Jong-un has continued these traditions, though with the Stalinist touch of treating those closest to him with bloody brutality.

Nevertheless, in this case Kim fils is behaving rationally. The United States, which enjoys an overwhelming military advantage and imposes regime change whenever convenient, threatens his rule. Washington’s attack on Muammar el-Qaddafi’s regime, which had negotiated away its missile and nuclear programs, demonstrated that American officials cannot be trusted. North Korea never could build a conventional force capable of resisting a U.S. attack. A nuclear deterrent is the most obvious and perhaps the only answer, and it is most effective if frequently brandished.

This raises the obvious question whether Pyongyang would behave so provocatively if America was not on the scene. No one should expect a kinder, gentler Kim to emerge. But his “byungjin” policy of pursuing both nuclear weapons and economic growth faces a severe challenge, especially since sanctions continue to limit the DPRK’s development. With the United States far away he would have more reason to listen to China, which long has advised more reforms and fewer nukes. He also might be more amenable to negotiate limits on his missile and nuclear activities, if not give up the capabilities entirely. Since nothing else has worked, an American withdrawal would be a useful change in strategy.

Of course, members of Washington’s foreign policy establishment, who seem drawn to conflicts like moths are attracted to lights, would be horrified. But Americans would be better off if their leaders sought to avoid rather than join other nations’ conflicts.

The justification for U.S. troops in Korea disappeared decades ago. Bringing them home and shrinking America’s military accordingly would ease a defense burden that will become ever less affordable. Moreover, getting out of Korea would transform a threat environment used by Pyongyang to justify its overwhelming military spending. It’s rare to find such a win-win policy for the Korean peninsula.

Doug Bandow is a Senior Fellow at the Cato Institute and a former Special Assistant to President Ronald Reagan. He is the author of  Tripwire: Korea and U.S. Foreign Policy in a Changed World and coauthor of The Korean Conundrum: America’s Troubled Relations with North and South Korea.

Image: A statue at the Korean War memorial in Washington, DC. Flickr.