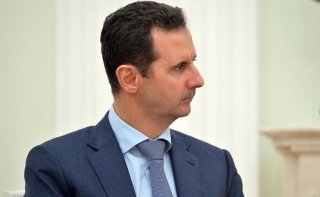 Several dozen career foreign-service officers in the U.S. State Department think U.S. policy in Syria is at an utter standstill and in absolute disarray. These fifty-one diplomats apparently have such strong feelings that they wrote a secure cable to the White House laying out their collective misgivings about the policy. Regime-change, they write, is the only way out of the civil war and the only option that Washington and its allies have to save the lives of thousands of additional Syrians that will surely perish in the weeks and months ahead from barrel bombings, missile and artillery attacks, and starvation sieges perpetrated by Bashar al-Assad's regime.

From the draft cable, courtesy of the New York Times:

Initiating targeted military strikes in response to egregious regime violations of the CoH (cessation of hostilities) would raise the cost for the regime and bolster the prospects for a real ceasefire...and lead to a more serious diplomatic process, led by the United States. A reinvigorated CoH would help the political process to mature as we press for the formation of a transitional government body with full executive powers that can start to rebuild Syria and Syrian society, with significant assistance from the international community.

The fact that so many foreign service officers have the same terrible assessment of the administration's Syria policy is a wake-up call to the White House. Former diplomats who used to lead the Syria file, including former U.S. Ambassador to Syria Robert Ford and the State Department's former point-man on the Syria transition, Fred Hof, have pleaded for the administration to change course to stop the Assad regime's daily atrocities against the Syrian people. The Russians, they argue, are not respecting the very cessation of hostilities that they helped put together. Nor is Moscow budging from its insistence that the Syrian people – and the Syrian people alone – should be the sole actors who determine whether Bashar al-Assad stays or goes in a future transitional government.

It's difficult for even the most loyal White House official to defend the administration's policy choices. Indeed, even President Barack Obama himself has acknowledged that Washington underestimated the staying capacity and strength of the Assad regime and the willingness of the regime's allies to come to its defense with ground troops, financial and military assistance, and airstrikes.

The State Department diplomats who signed the communique are asking for President Obama to authorize the use of U.S. military air power against key Assad regime installations for one reason and one reason only: to make the Geneva diplomatic process more credible. It’s an argument that should be given considerable weight within the National Security Council, and it’s one that Secretary of State John Kerry has reportedly been pushing for in interagency meetings at least since the August 2013 sarin gas attack in the suburbs of Damascus.

Only time will tell whether the recommendations outlined in the communique will get high-level attention at the White House. President Obama has acted as an emergency brake to others in his administration who have lobbied for more aggressive military action against the Syrian military. And it’s unlikely that Obama, with seven months to go before relinquishing the Oval Office to either Hillary Clinton or Donald Trump, will embrace the changes that these foreign-service officers are advocating for (it would require a 180-degree turn from Obama and an admission that the status quo isn’t serving U.S. national-security interests in the region well).

Yet it won’t take a new policy approach to come at the problem with a level-head and clear eyes. It’s time to admit the obvious, and plan accordingly:

The 51 nameless diplomats have caused a stir in Washington. But they have also opened up a discussion that one would hope the White House is engaged in. And to that, we should thank the dissenters for being honest and courageous enough to challenge the status-quo and possibly forcing a review of what the U.S. hopes - and can - achieve in Syria.