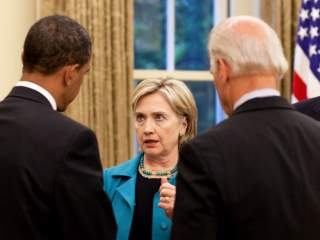 A long profile on Hillary Clinton in the Washington Post earlier this week highlights the 2011 Libyan intervention as a key indicator of her approach to foreign policy. Clinton claims that the Libyan bombing campaign was an example of “smart power at its best.” If she actually believes that, it raises serious questions about her judgment, as well as about her ability to analyze foreign policy dispassionately and with the best interests of the United States at heart. If Clinton is willing to point to Libya as a “signature moment in her four-year tenure” as secretary of state, as the story says, then her resume is breathtakingly shallow.

The story doesn’t come off as uniformly flattering. The headline calls it “a tough call” that supposedly “still haunts” Clinton, and the subhead references Clinton’s ill-considered support for the war in Iraq in 2002. But all of the people quoted by name in the story are Clinton supporters or advocates for the operation that ousted Libyan leader Muammar el-Qaddafi from power, and eventually resulted in his death. The Post should have searched harder for critics who believe that the decision to intervene was flawed at the outset. Instead, the story failed to include a single attributable quote pointing out that the war didn’t serve U.S. national security interests.

But the Libyan gambit was never really about U.S. national security—which is why Vice President Joe Biden, Secretary of Defense Robert Gates, National Security Advisor Thomas Donilon and most of the senior members of the military opposed it. Some European countries, especially those along the Mediterranean, feared that an influx of Libyan refugees would pose a security challenge, and they could have sought U.S. help on those grounds.

Instead, the war was sold as a humanitarian mission, one of the first practical applications of the doctrine of a “responsibility to protect” innocent civilians from harm. Qaddafi’s threat to hunt down the rebels hiding in Benghazi like “rats” provided the opening that the liberal interventionists were looking for. The UN Security Council considered a U.S.-sponsored resolution authorizing “all necessary measures” to protect Libyan civilians. Russia and China withheld their UNSC vetoes, allowing the resolution to pass on March 17. Almost immediately, U.S. warplanes began destroying Libyan air defenses. Other NATO countries joined in the bombing campaign later.

If the object was to save innocent lives, however, then one must certainly account for the many thousands who have been killed in the Libyan civil war raging, off and on, since Qaddafi’s overthrow. Several scholars have scrutinized this point in depth, including my Cato colleague Benjamin Friedman here and here for the National Interest online.

But anyone analyzing the Libyan intervention, and especially those who believe that it served humanitarian ends, should familiarize themselves with Alan Kuperman’s work on the subject, especially his in-depth study in International Security, summarized here and here.

Kuperman reiterated his earlier findings last year in Foreign Affairs. The key takeaways are unambiguous. “In retrospect,” Kuperman writes, “Obama’s intervention in Libya was an abject failure, judged even by its own standards. Libya has not only failed to evolve into a democracy; it has devolved into a failed state.”

“Despite what defenders of the mission claim, there was a better policy available—not intervening at all. . . . Instead, Libya today is riddled with vicious militias and anti-American terrorists—and thus serves as a cautionary tale of how humanitarian intervention can backfire for both the intervener and those it is intended to help.”

Indeed, the ISIS presence in Libya has now grown to the point that there is open talk of another major military intervention to root them out. Meanwhile, the decision to overthrow a despotic ruler in a foreign country after he had chosen to turn over his rudimentary nuclear weapons program sent a very clear message to every other despotic ruler in the world: if you have nukes, don’t give them up; and if you don’t have them, get some.

If this is “smart power at its best,” as Clinton says, I would hate to see it at its worst.