Libya and the 5 Stages of U.S. Intervention 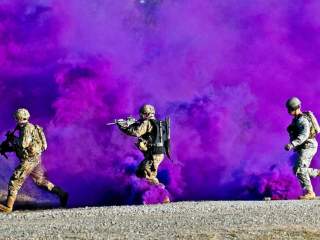 The United States and its European allies are ramping up plans to intervene in Libya again, this time to confront the growing Islamic State presence in the country. The eagerness to jump back into Libya follows a five-stage pattern that has become all too familiar since the end of the Cold War. This pattern reflects the fundamental inability of the American political system to accept the world as it actually is, rather than how policymakers prefer it to be. Without addressing this dysfunction, the United States will find itself unable to break its cycle of failure in the Middle East.

Since the end of the Cold War, every U.S. military intervention has been one of choice rather than necessity. Even the terrorist attacks of 9/11 did not require the United States to launch a full-scale invasion of Afghanistan. Instead, it is outrage that has driven American intervention. After 9/11, the outrage was visceral, stemming from the intense pain caused by the terrorist attacks. In most other cases, the outrage has been philosophical, erupting when events abroad violated the moral sensibilities of American foreign-policy elites and the public.

Even on the eve of Desert Storm in January 1991, a war approved of by many realists, outrage was evident in President Bush’s explanation of the decision to go to war. Citing the need for a “new world order” in which the rule of law triumphed over the “law of the jungle,” Bush quoted Marine Lieutenant General Walter Boomer, saying: "There are things worth fighting for. A world in which brutality and lawlessness are allowed to go unchecked isn't the kind of world we're going to want to live in.''

Obama’s speech to the nation about the first Libyan intervention revealed similar motivations. In his speech to the nation announcing the operation Obama told the public that, “We knew that. . . if we waited one more day, Benghazi, a city nearly the size of Charlotte, could suffer a massacre that would have reverberated across the region and stained the conscience of the world.”

Stage 2: Stunted Debate and the Precipitous Use of Force

Once outraged, the United States typically mobilizes for intervention by conducting a stunted debate on the question of whether or not to use military force. The White House dominates the debate thanks to the president’s institutional advantage in courting the news media, and because opponents of intervention are afraid of getting on the wrong side of public opinion.

In many cases, proponents of intervention actively attempt to stifle rational debate by feeding the media hyped-up stories about the threat and telling stories aimed at generating more outrage. Many Americans will still remember the tearful Kuwaiti girl telling Congress about how the Iraqi army had thrown babies from their hospital incubators during Iraq’s invasion of Kuwait. The story would later turn out to be a lie, but was repeated endlessly at the time, making rational debate and opposition to the intervention much more difficult.

In turn, thanks to the reliance on emotion and the lopsided debate, there is little patience in the American political system for the steady exploration of alternative approaches. The American refusal to accept that thugs and evil regimes populate the world makes diplomacy difficult. Sanctions, meanwhile, are decried as too slow or ineffective to provide satisfactory progress for a political system hopped up on outrage.

The 2003 war in Iraq rightly receives a great deal of attention for the failure of rational debate. Despite the gravely suspect WMD intelligence and the improbable connections suggested between Saddam Hussein, Al Qaeda and 9/11, there was very little in the way of a sustained debate about the pros and cons of the invasion of Iraq. Even the New York Times editorial board would later apologize for how little coverage it gave countervailing evidence and the war’s skeptics.

But the better example of how outrage cuts off debate is surely Afghanistan. The Bush administration launched Operation Enduring Freedom on October 7, 2001, less than one month after 9/11. In the rush to send tens of thousands of troops to topple a government, there was hardly a dissenting voice to be found in the United States. The haste to retaliate and to destroy Al Qaeda was certainly understandable from an emotional perspective, but time revealed that it was an incredibly costly and counterproductive policy in the long run.

In the case of Libya, roughly three weeks elapsed between Secretary of State Hillary Clinton’s public acknowledgement that the U.S. might get involved militarily and Obama’s announcement to the American people that the United States had joined the effort to impose a no-fly zone in Libya. This left little time for a debate over the wisdom and mechanisms of U.S. intervention, even though many were in fact critical of the Obama administration’s decision. Later, NATO’s mission would expand without any real debate whatsoever, from enforcing a no-fly zone to supporting the rebels in ousting Muammar el-Qaddafi. Regime change, of course, was the very thing that led to the civil chaos that has allowed the Islamic State to take root in Libya.

The same inclination that motivates intervention in the first place is what drives the United States to claim victory on the basis of emotional, rather than strategic, calculations. Who can forget Bush’s dramatic “Mission Accomplished” speech on the deck of the aircraft carrier U.S.S. Abraham Lincoln six weeks after the invasion began? Saddam Hussein, the target of so much outrage since the first Gulf War, had been deposed, and his statue in Baghdad toppled. But Bush’s declaration was wildly premature; the real battle for Iraq had just begun. Obama would later double down on that declaration of victory, telling Americans that “The last American soldier[s] will cross the border of Iraq with their heads held high, proud of their success. . . That is how America’s military efforts in Iraq will end.”

The Obama administration followed the same course with Libya. In August of 2011, after rebels ousted the Qaddafi regime, U.S. officials called it a “model intervention.” Obama boasted that “Without putting a single U.S. service member on the ground, we achieved our objectives,” and Clinton described it as an example of “smart power” in action. In October, when the rebels finally captured and killed Qaddafi, Clinton crowed, “We came, we saw, he died!” As with Iraq, there was little indication that the Obama administration imagined that the swift “victory” in Libya might later prove to be something else.

Declaring victory cleans the slate in American politics, allowing presidents to drop the issue and move along to the next pressing issue. Without presidential pronouncements and U.S. military actions to follow, television drops the story and the newspapers move it to the back pages. What happens after a tyrant is toppled isn’t nearly as newsworthy as the chase to kill him in the first place. Then new fires break out, attracting the attention of the president and the media. Within weeks, the links between American actions and their consequences start to become obscured. Within a few months, it’s easy for the average American to forget the intervention ever happened.

What’s less clear, of course, is why political leaders forget so quickly. When Bush declared victory in Iraq, the United States was still deeply enmeshed in Afghanistan. When the Obama administration declared victory in Libya, the United States was not only still in Afghanistan, but Iraq continued to boil even as U.S. forces were withdrawing. One potential explanation is that American outrage first generates short-term thinking and rash decisions, and then spawns attention deficit disorder, provoking the impulse to move quickly from one emergency to the next. Under such conditions, it would be surprising if there were much room for historical reflection and lesson learning. Another, more cynical, possibility is that like the stock market, American politics only rewards short-term thinking.

Whatever the cause, the potent combination of outrage and memory loss paves the way for an endless repetition of the same mistakes. The Obama administration talks about military intervention in Libya today as if the previous intervention had never happened. When the Pentagon discusses plans to conduct air strikes, it does so without betraying any sense that there could be anything to learn from Libya’s recent history or the past fourteen years of the failed “war on terror.” Why, exactly, would the administration use almost exactly the same plan to prevent chaos today that helped create the conditions for chaos in 2011?

Outrage, of course, is a normal human reaction to pain and suffering. And to many, America’s desire to confront the world’s evils is a noble impulse worthy of an exceptional nation. The refusal to accept the world as it is, however, has no place in international relations because it prevents the clear-eyed assessment of costs and benefits required to make foreign policy. As understandable as it is to want to prevent oppression and punish rogue regimes, endless intervention has caused more problems than it has solved and at great cost.