Is McCain Beyond His Prime? 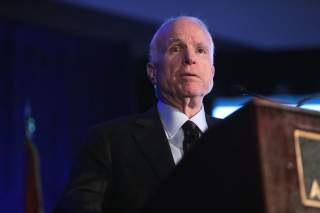 Sen. John McCain has the reputation of a foreign-policy maven. He pays attention to little other than foreign affairs. When he ran for president in the midst of the 2008 financial crisis, he admitted that he didn’t know much about economics, which helped doom his candidacy. Unfortunately, he shows no greater sophistication when it comes to his favorite topic.

Nor does he brook disagreement, even if well founded. In his view, those who disagree with him are little better than traitors. Especially Americans who believe that Senator McCain’s most important duty is to protect this nation.

In fact, he has routinely advocated what amounts to sacrificing U.S. interests while pushing confrontation and sometimes war with a long list of countries around the globe: Serbia, Afghanistan, Iraq, Libya, Syria, Iran, North Korea and, worst of all, Russia. There is scarcely a conflict he doesn’t want the United States to plunge into. And rarely a military deployment he does not want to make permanent. Whatever the international issue, he sees U.S. military action as the answer.

In his view, circumstances are irrelevant to foreign policy. Insurgency and secession in the Balkans. Terrorism in Central Asia. Dictatorship and conflict in the Middle East. Nonproliferation in Northeast Asia. The geopolitical detritus of the Soviet Union’s dissolution. In every case he pushes military intervention and action as the answer.

Most notably, Senator McCain does not appear to view a threat to the United States as necessary for going to war. Only in the case of Afghanistan was the United States attacked, and by a terrorist group located within the country, not the government. Within weeks, Washington had scattered Al Qaeda and ousted the Taliban regime, punishing it for hosting the terrorist group. Yet more than fifteen years later, he insists that America must continue its Quixotic quest to create a liberal Western-oriented republic where one has never existed, governed by a strong central government in Kabul, which has never ruled the many villages and valleys across the land.

In no other case were the targets of U.S. action interested in fighting the United States. Not Serbia, Iraq, or Iran. Certainly not Libya or Syria. Not North Korea, which wants to deter American military action rather than trigger it. Not even Russia, which desires respect and security rather than conflict. But for McCain, the military is not a last resort or even just another option. It’s a first resort almost irrespective of the issue. Bomb, invade and occupy, and if that doesn’t work, bomb, invade and occupy some more.

Senator McCain’s lack of geopolitical sense has been on dramatic display with the issue of NATO expansion. Never mind that the transatlantic alliance was created to promote U.S. security. In recent years NATO has added numerous nations that are security black holes, offering far more costs than benefits. The alliance was established to temporarily shield war-ravaged, vulnerable Europe from Soviet aggression; it has turned into a welfare agency that permanently shifts responsibility for defending prosperous and populous Europe onto America.

Reasonably enough, they insisted that what is supposed to be the world’s greatest deliberative body should devote at least a few minutes to debating the issuance of yet another security guarantee enforced by American money and lives. And so far Senate Majority Leader Mitch McConnell has not taken the time necessary to push the measure through. So Senator McCain again demanded unanimous consent.

But Senator Paul took to the floor to object. Senator McCain, long known for his explosive temper—which worried colleagues when he ran for president—no longer could contain himself. He complained that Senator Paul “has no justification for his objection to having a small nation to be part of NATO that is under assault from the Russians. So I repeat again: The senator from Kentucky is now working for Vladimir Putin.”

Actually, Senator McCain smeared anyone who disagreed with him. He also declared: “It there’s objection, you are achieving the objectives of Vladimir Putin. If they object, they are now carrying out the desires and ambitions of Vladimir Putin, and I do not say that lightly.”

Accusing Senator Paul—and everyone else with the temerity to oppose NATO’s inclusion of Montenegro—of being a traitor revealed Senator McCain as at best a nasty crank, and at worst a shameless demagogue. The next day Senator Paul observed that Senator McCain’s outburst made a “really, really strong case for term limits.” The venerable Arizona legislator was “past his prime” and even maybe had “gotten a little bit unhinged.” It’s hard to disagree with that assessment. The thought of such a person as president should give nightmares even in the era of President Donald Trump.

In fact, Senator McCain forgets who he represents. His spokesman Julie Tarallo said “the people of Montenegro” as well as senators “deserved an explanation from Senator Paul on the Senate floor as to why he sought to prevent this small, brave country from joining in the defense of the free world.” Of course, Tarallo misleads her listeners by suggesting that this modern variant of the Duchy of Grand Fenwick, the star of the novel The Mouse that Roared, could help protect someone else. Without a navy or air force, and with an army in name only, Podgorica isn’t defending anyone or anything.

Moreover, Senator McCain knows why Senator Paul objected since he, unlike Senator McCain, has long has made his belief that U.S. foreign policy is to serve the interests of the United States, not would-be client states. And an American senator from the state of Kentucky owes no explanation to the people of Montenegro. Whether heroic or not, they have no right to expect to be defended by the United States.

The purpose of NATO was to make America more secure, not turn defense guarantees into charity for states irrelevant to America’s defense. If Senator McCain believes Montenegro aids the United States, he is living in a parallel universe. Podgorica has 1,950 men under arms. However brave they may be, they won’t stop the senator’s imagined Russian hordes from conquering Europe, America and presumably the rest of the world.

His mental confusion is even greater if he actually believes Montenegro is under attack. Russia would gain nothing from war. The country does not even border Russia. Vladimir Putin has made no territorial claims against the quaint movie set for Casino Royale. The ruling regime blames a recent coup attempt on Moscow, but the evidence is thin: in fact, the country’s political divisions are real and, as Senator Paul pointed out, as many Montenegrins oppose as support NATO membership, hardly the kind of backing one would want from a military ally.

Ultimately, Senator McCain’s nastiness is less important than his willingness to sacrifice American interests, wealth, and lives in an endless attempt to transform the globe. Social engineering is difficult enough at home. The presumption that Washington politicians can transcend differences in history, religion, geography, ethnicity, culture, politics and more to remake other nations is a fantasy. Tragically, over the last sixteen years this hubris, shared by Senator McCain and so many other policymakers, has killed thousands and injured tens of thousands of Americans, slaughtered hundreds of thousands of foreign civilians, generated millions of refugees, wasted trillions of dollars, multiplied terrorist threats, and created geopolitical chaos.

The United States continues to pay the price for Washington’s bipartisan commitment to promiscuous intervention. Senator McCain symbolizes a discredited foreign policy disconnected from geopolitical reality. If anyone is serving the interests of Vladimir Putin, it is Senator McCain, who advocates squandering American lives and wealth in an endless succession of counterproductive crusades abroad.

Doug Bandow is a Senior Fellow at the Cato Institute and a former Special Assistant to President Ronald Reagan. He is the author of Tripwire: Korea and U.S. Policy in a Changed World and co-author of The Korean Conundrum: America’s Troubled Relations with North and South Korea.