Montenegro and the Folly of NATO Expansion 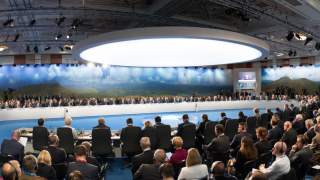 On Wednesday, the North Atlantic Treaty Organization (NATO) formally invited Montenegro to join the U.S.-led Western military alliance.  Montenegro is consequently on track to become the thirteenth country from the former Eastern bloc to join NATO since the end of the Cold War.  In the midst of ongoing Russo-American tension over Ukraine and Syria, however, further NATO expansion is a huge mistake.

The invitation to Montenegro has already prompted the Kremlin to warn of “retaliatory actions from the East.”  That response should come as no surprise.  Moscow has made it quite clear that it views NATO expansion into Eastern Europe as part of a campaign to isolate and encircle Russia.  Moreover, many Russians view that expansion as a blatant violation of promises made by Western leaders at the end of the Cold War.  In March 2014, for instance, Vladimir Putin asserted pointedly that “they have lied to us many times, made decisions behind our backs…This has happened with NATO expansion to the East.”

Western countries, particularly the United States, have evinced little sensitivity to Russia’s concerns, however.  Politicians frequently protest that NATO expansion is not designed to counter Russia.  Many have also responded to Russian claims of betrayal by arguing that as the communist bloc was unraveling in 1990, Western leaders never explicitly pledged not to expand NATO eastward.  Regardless of the historical truth, however, what really matters is Russia’s perception of NATO enlargement.  Since that expansion has clearly antagonized Russia, it would therefore be wise to desist.

Proponents of NATO expansion argue against permitting Russia to exercise a veto over alliance decisions.  They are absolutely correct that NATO has the right to extend membership to whichever independent states it chooses.  But exercising that right in defiance of Russia’s insecurities is foolhardy.  NATO expansion should be based upon careful examination of both costs and benefits.

Unfortunately, Montenegro’s accession to NATO will entail significant costs.  Over the past couple years, Russia’s interventions in Ukraine and Syria have poisoned relations between the United States and Russia, and sparked fears of the onset of a new cold war.  Yet Russo-American cooperation is indispensable to the eventual resolution of those two conflicts.  By further alienating Russia, NATO’s invitation to Montenegro will likely render such cooperation even more difficult.

That cost might be acceptable if there were substantial benefits to Montenegro’s membership in NATO, but there simply are not.  Only about 2,000 active duty personnel comprise Montenegro’s armed forces—and those personnel are trained and equipped primarily for internal security operations.  By incorporating Montenegro, NATO will consequently be extending its security umbrella over a country that will contribute almost nothing to the common defense—not to mention out-of-area operations.

Some might argue that NATO expansion is beneficial insofar as it fosters the consolidation of liberal reforms in newly-democratic states.  Yet democratic consolidation is the domain of a political union, not a military alliance.  That task should consequently be left to the European Union (EU)—accession to which Montenegro is still negotiating.

Of course, EU expansion also has the potential to antagonize Russia.  It was, after all, controversy over Ukraine’s association agreement with the EU, which catalyzed Russian intervention in Ukraine.  The prospect of Ukraine’s eventual accession to the EU would likely have been much less troubling to the Kremlin, however, if EU and NATO expansion had not proceeded largely in tandem throughout the post-Cold War era.  That being the case, halting NATO’s expansion might render EU enlargement less troubling to Russia.

Ultimately, Montenegro’s accession to NATO will pose little threat to Russia.  Nevertheless, NATO’s invitation will likely confirm the Kremlin’s fears that the West is intent upon besieging Russia.  If the United States is serious about cooperating with Russia to resolve crises like the conflict in Syria, it is therefore essential to halt NATO’s expansion.  The costs of antagonizing Russia are simply not worth the meager benefits of further enlargement.

Brad Stapleton is a visiting fellow in defense and foreign policy studies at the Cato Institute.