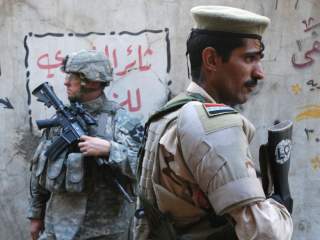 The United States is back in Iraq. Actually, it never really left.

President Obama supposedly withdrew all American forces in 2011, except for a few hundred Marines, defense contractors, and military advisors. But it wasn’t long before he began ramping up our presence again, through temporary deployments and other means. This only accelerated after the Islamic State’s blitz through Iraq in 2014. Today, the government has blown through even its self-imposed cap of 3,870 troops, with an acknowledged five thousandAmerican military personnel now on the ground in Iraq. It’s another lazy half-measure—like the disjointed attempt to combat the Taliban—from a president who’s never once laid out a coherent strategy for fighting terrorism.

The problem is that, as we should have learned well the first time around, victory is much more complicated than adding firepower. Additional troops will do little to ameliorate the current terrorism problem, which comes primarily from homegrown jihad in European neighborhoods. As for Iraq itself, the Islamic State may very well be defeated—the group has lost about 22 percent of its Iraqi territory over the last fifteen months—but little will change without strong institutions and political stability.

If you want to see what the polar opposite of that looks like, spend a few minutes observing the Iraqi parliament.

Actually, let me retract that statement. You can’t observe the Iraqi parliament right now because it’s been suspended. The speaker, Salim al Jabouri, made the decision after disputatious MPs voted to sack him, and there’s been quarreling ever since over whether the vote was valid. The parliament, according to Jabouri, will remain shuttered “until further notice.”

Speaker’s office politics aside, Jabouri has good reason to doubt his body’s efficacy. Iraq’s parliament has been a mess recently, culminating in a fistfight last week between Kurdish and Shiite lawmakers (you thought the British House of Commons was rowdy). At issue was Prime Minister Haider al Abadi’s plan to replace his patronage-heavy cabinet—regarded as incompetent by many Iraqis—with a more neutral team of experts.

It was a valiant goal. Iraqi politics has long been plagued by graft: Transparency International rates Iraq as the seventh most corrupt country in the world, tied with failed state Libya and scarcely better than civil war-imperiled South Sudan. (Bashar al Assad’s regime in Syria actually ranks higher than the government in Baghdad.) Previous attempts to fight corruption have proven less than successful. Last year, a Trade Ministry advisor was preparing to hand over documents exposing malfeasance in his department. He was killed when a bomb exploded in his car.

So Abadi had to know he was taking on a sensitive issue—and unfortunately he backpedaled under pressure, proposing a second cabinet list that contained only four names from the original roster. This, too, proved too much; various political blocs rebuffed Abadi and parliament was brought to a standstill. The Iraqi street was inflamed as protesters, who want a shakeup and have been irate for months over the government’s inability to provide essential services, spilled into the Green Zone. Abadi now finds himself hemmed in by the demonstrators on one side and recalcitrant politicians on the other, while Western diplomats glance anxiously at Mesopotamia and wonder if Iraq’s government is about to collapse during a crucial moment in the fight against ISIS.

Meanwhile, an old foe has returned: Muqtada al-Sadr, once the leader of a Shiite insurgency against American forces, now the architect of the street protests. Since he dissolved his Mahdi Army militia in 2008, Sadr has established himself as a champion of Iraq’s Shiite poor. He also commands a sizable bloc in parliament. Sadr is likely gaming the turmoil for his own advantage, whipping up demonstrations against Abadi while surreptitiously working to stymie reforms. That way Shias will grow increasingly restive and his own standing will increase.

So this is where Iraq stands today: blatantly corrupt, politically paralyzed, unable to accomplish the most rudimentary functions of civil society, milked by opportunists, with extremists waiting in the wings. “[S]ecurity will only succeed long-term if governments make a genuine break with cronyism and build trust with citizens,” Ghada Zughayar of Transparency International says. That link between corruption and unrest is what threatens Iraq today. How can a government that can’t even clean its own house maintain a stable army? Or assuage disenchanted Sunnis?

It’s a fine thing that the Islamic State is being beaten back. But if and when it’s gone, those jihad networks, those sectarian tensions, that dysfunction will still be there. All it will take is another spark to explode the next round of terrorism and instability. In Iraq, America is trapped in an endless cycle from which it can’t escape.