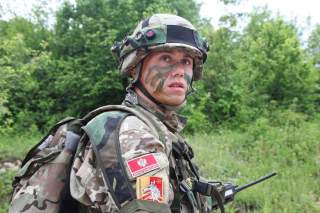 The American-led NATO alliance is expanding once again by formally inviting Montenegro to become a member. The Montenegrin Prime Minister, Milo Đukanović, assured the NATO secretary-general that "you can count on us at any time." It is always nice to hear that someone has your back. But in Montenegro’s case, it means that they have our back with an entire active-duty military force of only two thousand personnel. It is not quite clear how the tiny nation of less than 700,000 people enhances U.S. security in the slightest. In fact, one might argue that adding Montenegro to NATO actually detracts from U.S. security.

NATO is not a tiddlywinks club. It is a military alliance in which members are obligated by Article 5 of the charter to come to the defense of any member that is attacked. It is not clear who might want to attack Montenegro anytime soon, but that is entirely beside the point. Extending NATO membership to a state is essentially a guarantee that the United States would expend blood and treasure in that country’s defense if necessary. Such a serious obligation should only be extended to states whose partnership increases U.S. security.

It is not clear how support from Montenegro can increase U.S. security. Despite Montenegro’s proud tradition of resistance to Turkish rule, Montenegrin forces would play a negligible role in any conflict the U.S. might find itself in. On the contrary, Montenegro’s invitation seems to have already worked to undermine relations with Russia who, according to Christian Science Monitor, has accused “NATO of trying to encircle it and friendly nations like Serbia, and vowed to do what's necessary to defend its national security and interests.”

Lest anyone forget, Russia has a nuclear arsenal slightly larger than the United States and is the largest geographical country on Earth. Given the deteriorating relationship between Russia and the West over a variety of disagreements, it is entirely possible that Russia and America could end up stumbling into war. As Harvard professor Graham Allison has pointed out in regards to the situation with Russia, miscalculations and misunderstandings that lead to violent conflict are common in history. As John Mearsheimer has argued, Russia may start to feel cornered and desperate and might actually use its nuclear weapons. We don’t need any more stumbling blocks that could inadvertently contribute to armed conflict.

The NATO secretary-general also used this occasion to remind the world that membership remains open “to countries like Georgia, Macedonia and Bosnia-Herzegovina.” How those countries would in any way contribute to the ability of the U.S. to defend its national interests is unclear. What is clear, however, is that further encircling Russian ally Serbia and adding Georgia, a former part of both the Russian Empire and the Soviet Union, to the alliance would be a terrible idea. In fact, Russia invaded Georgia in 2008 in order to prevent it from joining NATO.

Supporters of Montenegro’s invitation to the alliance might point to other small NATO countries such as the Baltic States. Quite the opposite, the Baltics are the perfect example of why small, militarily insignificant states should not be admitted into NATO. A recent study by the RAND Corporation found that Russia would likely reach the capitals of Estonia and Latvia within sixty hours if it invaded. Admitting the tiny Baltic States to NATO has come with very large risks for America without actually making the United States any safer.

Frankly, adding Montenegro to NATO is ridiculous. New York City would be a more useful NATO member. After all, according to Michael Bloomberg, the New York City Police Department “is the seventh largest army in the world.” With just under 35,000 officers, the NYPD is over seventeen times larger than the Montenegrin armed forces. In fact the NYPD budget, clocking in last year at $4.8 billion, amounts to just under half of Montenegro’s GDP. Adding New York City to NATO also has the additional benefit of not worsening tensions with Russia.

Facetiousness aside, NATO expansion is no laughing matter. It is nothing personal against Montenegro, but its addition to NATO is simply irresponsible. It will not contribute to U.S. security and will serve as another point of contention with Russia. The U.S. senate should exercise its veto power over Montenegro’s invitation into the alliance when it is introduced, and in the future should put the kibosh on any more attempts at NATO expansion that don’t contribute to U.S. security.

Zachary Yost is a Young Voices Advocate who works in the DC area.