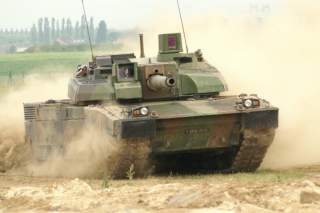 The announcement that NATO would deploy four battalions of troops to the Baltic republics and Poland is merely the latest evidence that Western officials are utterly tone deaf about how their actions are going to be received in Moscow. The apparent assumption is that such a vigorous display of determination to protect the security of the Alliance’s vulnerable eastern members will cow the Kremlin and prevent any inclination to engage in coercive measures. Those officials seem oblivious to the notion that even reasonable Russians, much less the somewhat paranoid crowd gathered around President Vladimir Putin, might regard NATO’s moves as menacing to Russia’s core security interests.

It is an attitude that Western leaders need to alter drastically before the current, rather chilly, relationship with Russia escalates into a full-blown second Cold War. Indeed, the ongoing tensions have the potential to escalate into an armed conflict with nuclear implications. And unlike the original Cold War, in which Moscow bore most of the blame for the confrontation, this time the United States and its allies have that dubious distinction.

Western, especially U.S., leaders steadfastly refuse to concede Moscow even a limited sphere of influence or security zone along its borders. It has been a bipartisan view in American policy circles. Both Condoleezza Rice, George W. Bush’s Secretary of State, and John Kerry, Barack Obama’s, sharply condemned Russia for taking military action against recalcitrant neighbors and explicitly rejected even the theoretical legitimacy of a sphere of influence. In Rice’s case, the triggering incident involved the military conflict in Georgia; in Kerry’s, the annexation of Crimea.

There is also a pervasive bipartisan assumption that Russia is an aggressively expansionist power. A new report by the House GOP, “Achieving U.S. Security Through Leadership & Liberty,” fully embraces that view without any meaningful caveats. And clearly the Obama administration’s foreign- and defense-policy teams have been operating on the same assumption.

But is it a valid assumption? During the Cold War, Moscow was animated by a messianic global ideology. Today’s Russia is not. The Soviet Union aggressively attempted to extend its influence into far-flung portions of the world. Today’s Russia seems to focus on Eastern Europe, Central Asia and the Black Sea—all areas that have obvious strategic importance to even the most defensive-minded Russian state.

Some of Moscow’s geopolitical actions may be crude, even brutal. That was certainly true of its role in helping secessionists to detach the regions of South Ossetia and Abkhazia from Georgia. It was also true of the annexation of Crimea and the military support for separatists in the Donbass region of Ukraine. But one has to ask whether those maneuvers were any cruder than NATO’s earlier forcible detachment of Kosovo from Serbia or NATO-member Turkey’s detachment of northern Cyprus from the government of that country. And Russia had much stronger security justifications for its actions.

Americans especially should ask when and why the fate of such countries as the Baltic republics, Georgia, and Ukraine became a vital security interest of the United States. Because we now apparently regard their security as sufficiently important that we are willing to risk a military confrontation, perhaps even a full-scale war, with Russia. Given Russia’s sizable nuclear arsenal, that would be an act of folly.

Let’s remember that until the collapse of the Soviet Union—and at other times in the history of the Russian empire—those countries have been under Moscow’s direct control. For example, until Nikita Khrushchev, the General Secretary of the Soviet Communist Party, gifted the Crimea to Ukraine in 1954, that peninsula had been part of Russia since 1783. And Moscow’s control over such areas did not matter a whit to the United States. So why now, when we face a weakened Russia, a country with a declining population and a host of economic vulnerabilities, does the U.S. and its allies seem intent on provoking a confrontation?

Smart great powers show a decent respect for the security zones and spheres of influence of other great powers. Geography matters. Any major country is going to resent other nations intruding militarily into its immediate neighborhood. Imagine the U.S. reaction, for example, if an alliance led by China or India acquired clients and deployed military units in the Caribbean or Central America. We would justifiably regard such conduct as extremely menacing. Why do we then assume that the Russians should regard NATO’s actions in places such as the Baltic republics and the Black Sea differently? The current policy course is a tragic accident waiting to happen.

Ted Galen Carpenter, a senior fellow at the Cato Institute and a contributing editor at The National Interest, is the author of ten books on international affairs, including several books on NATO.