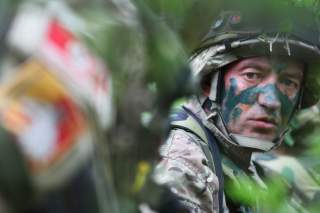 NATO’s European members, especially the newest members in eastern Europe, incessantly fret about the threat that Vladimir Putin’s Russia poses to their countries and the continent. Their worries were noticeable even before the eruption of the Ukraine crisis in 2013 and 2014. Moscow’s 2008 military intervention in Georgia to support South Ossetia’s secessionists alarmed those countries. So, too, did Russia’s gradual but significant military restoration and modernization programs.

But it was Putin’s reaction to the overthrow of the pro-Russian government of Ukrainian president Viktor Yanukovych in early 2014 that greatly intensified their worries and led to a surge of warnings to NATO partners that the alliance must become more serious about deterring a growing Russian menace. Putin’s annexation of Crimea and his support for secessionist forces in eastern Ukraine seemed especially ominous. Estonian president Kersti Kaljulaid noted that “in 2008, they moved on Georgia . . . I am afraid now that the resolve of the Western countries may not hold in the case of Ukraine. We need to stand very firm against giving again a message to Putin that it will blow over.”

German chancellor Angela Merkel cited the impact of Moscow’s actions in Ukraine, especially on the former Soviet satellite nations. She charged that Moscow had undermined European security in “words and deeds” by infringing on Ukraine’s borders and “profoundly disturbed” NATO’s eastern members who “therefore require the unambiguous back-up of the alliance.” Edgars Rinkēvičs, Latvia’s minister of foreign affairs, was even more specific. “We have to be prepared that ‘the little green men’ [disguised Russian military personnel] may try to create confusion, just like they did in Crimea,” he said.

Despite the upsurge in dire warnings, most of those same countries have not translated their professed alarm into meaningful efforts to strengthen their own military capacities. Granted, even the largest nations in NATO’s eastern European cohort, such as Poland and Romania, could never hope to match Russia’s military power on their own. But considerations of national self-interest should motivate them to adopt a “porcupine” strategy—having a sufficient defense capability that it would make any invasion so costly in blood and treasure that no rational Kremlin leader would consider adopting that course.

Unfortunately, the eastern European nations have done nothing of the sort, even as their warnings become increasingly shrill and their demands that the United States do more to protect them from Russia grow more insistent. The continuing mismatch between rhetoric and action raises obvious questions about how serious those countries are about their own security.

Their leaders exhibit no trace of doubt that Russia is a dangerous, menacing power. In a March 2017 interview, Dalia Grybauskaitė, president of Lithuania, stated bluntly: “Russia is a threat not only to Lithuania but to the whole region and to all of Europe. We see how Russia is behaving in Kaliningrad, a Russian enclave on our border. There they have deployed nuclear-capable missiles that can reach European capitals. It is not just about the Baltic region anymore.” Poland’s foreign minister, Witold Waszczykowski, was equally alarmist, insisting that Russia's behavior posed an “existential threat” to Poland and the rest of democratic Europe even greater than ISIS.

One would think that if the threat were that serious, NATO’s European members—especially those in the East—would be engaged in crash programs to strengthen their militaries. Yet there are few signs of such determination. At the 2006 NATO summit, there was a commitment that every country would spend a minimum of 2 percent of its gross domestic product on defense. At the time of the Ukraine crisis, other than the United States, only Britain and Greece (because of its worries about fellow NATO member Turkey) had met that goal. Since then, Estonia and Poland have done so—barely.

The other eastern European nations lag far behind. The other two Baltic republics, Lithuania and Latvia, spend 1.49 and 1.41 percent, respectively. Romania and Bulgaria devote 1.41 percent and 1.30 percent. Slovakia and Hungary spend a mere 1.12 percent and 1.02 percent, and the Czech Republic brings up the rear at 1.01 percent. NATO’s leading countries don’t do significantly better. The figures for France and Italy are 1.79 and 1.11 percent, respectively. Perhaps most telling, democratic Europe’s leading economic power, Germany, spends a pathetic 1.20 percent.

The anemic defense budgets are just one sign of an unserious commitment to defense. Several NATO countries use even those limited funds to create glorified jobs programs for otherwise unemployed youth. One key sign of that misplaced is the low percentage of total military spending going to weaponry and other equipment. NATO’s target is 20 percent. Although the situation has improved modestly over the past three years, only nine members currently attain that goal. Moreover, several countries have actually reduced the percentage they devote to such expenditures. Among them are frontline states such as Estonia, Bulgaria and the Czech Republic—as well as Germany. It was no surprise that Merkel’s government reacted angrily to President Trump’s demand that it spend more on defense. Indeed, the Germans seem to think they are making a Herculean effort if they reach the two percent threshold by 2024.

Such efforts are woefully insufficient to build the robust forces needed for a porcupine strategy. That suggests that policymakers in those countries have reached one of two conclusions. Either they don’t really consider the Russian threat all that serious, despite their rhetoric to the contrary, or they are counting totally on the United States to protect them. Either possibility is infuriating, but the latter is especially so. It is one thing to believe that Americans should care about Europe’s security. It is quite another to believe that Americans should care more about Europe’s security than the Europeans do. Washington’s NATO partners need to fund serious efforts to deter the alleged Russian threat, or they need to stop wailing about the dire nature of that threat.