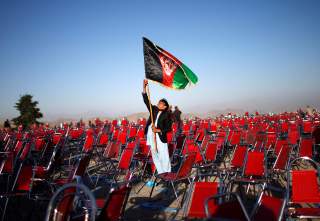 At hearings on Capitol Hill earlier this month, Secretary of Defense James Mattis admitted that the administration currently doesn’t have a strategy for the war in Afghanistan, but promised one by the end of July. Given the number of troops his plan will reportedly include, however, the new strategy will at best ensure the war continues without resolution into perpetuity. Rather than anchoring the United States to a state of permanent failure, President Donald Trump should demand disruptive alternative policies that makes strategic success possible. Fortunately, viable options do exist.

Numerous Senate and House committees have held hearings of late discussing Afghan war strategy, and there has been considerable debate among pundits regarding the number of troops that Mattis should deploy. Lost in these discussions is an examination whether the oft-stated objective (preventing terrorists from using Afghanistan to plan future terror attacks against the United States) is even achievable.

Before troop levels can be set, an agreed-upon strategy has to be selected; before a strategy can be chosen, an achievable end-state must be identified. For well over a decade, no achievable end-state has been discussed, debated or assigned in Afghanistan—and that is the primary cause of the stalemate that currently afflicts U.S. policy there.

In the immediate aftermath of the 9/11 terror attacks, President George W. Bush stated clear and limited U.S. policy was to initiate “carefully targeted actions” that were “designed to disrupt the use of Afghanistan as a terrorist base of operations and to attack the military capability of the Taliban regime . . . By destroying camps and disrupting communications, we will make it more difficult for the terror network to train new recruits and coordinate their evil plans.”

By the summer of 2002, those valid objectives had been fully accomplished. America’s military performed brilliantly and achieved its primary goals.

The Taliban was outright destroyed as a coherent entity and Osama bin Laden, with all but a handful of his Al Qaeda fighters, had been driven from the country. An effective course of action at that point would have been to begin transition by that autumn to a State Department-led mission focused on assisting the Afghan people in rebuilding their government, security forces and economy.

Should any Afghan government have harbored or supported terrorists in the future, the military option would always be available—but a trillion dollar, multi-decade occupation spanning three U.S. administrations (so far) was not necessary.

Since at least 2005, U.S. policy has languished under two leach-like policy failures that have consistently ensured nothing beyond a stalemate can be achieved: a persistent unwillingness to demand an end to Afghan government corruption and cross-border support for the insurgency by Pakistan. Until those two cancers are eradicated, no amount of U.S. military power will end the war.

To an American audience, it is sometimes difficult to grasp how Afghan government corruption prevents U.S.-allied forces from defeating the insurgency. A few key examples will serve to illuminate the gravity of the situation.

The most visible face of the Kabul government to the people are the police forces, more so than the army. As has been painstakingly detailed by the Afghan Analysts Network (AAN), the various divisions of Afghan police have been and continue to be deeply infiltrated by corruption. In too many cases, positions of leadership are purchased, not earned through merit.

An AAN study by Kate Clark released earlier this month revealed that those who purchase their positions have to recoup the investment, and “almost inevitably, [that] means police involvement in crime, including racketeering and drug smuggling, and/or making money from the ministry itself. This ranges from crooked contracts and pocketing the salaries of policemen who do not exist, to so-called ‘ghost policemen.’”

The consequences of this corruption are clear, Clark says. When policemen “extort money from travelers and protection money from shopkeepers and landlords, the legitimacy of the state is poisoned.” Hamid Karzai made the situation worse by seeking to install a number of crooked police generals to head each of the thirty-four provinces. According to Human Rights Watch, a number of these men had been “implicated in murder, torture, intimidation, bribery, government corruption and interfering with police investigations.”

When the top leaders take such actions, it infects the resolve of the men who must face the Taliban in combat. A Reuters report from last year described how numerous policemen were abandoning their posts due to relentless Taliban attacks. The reasons, however, weren’t because the fight was too hard or the men insufficiently trained.

Reuters explained that “on the frontlines, army and police deserters complain of commanders having no answer for deadly ambushes, no broader strategy for prevailing in the war, corruption among their leaders and poor food and equipment.” The author wrote that barely a day passed without gunfire, ambushes and roadside bombs.

One of the policemen interviewed for the article said, “we were treated as if we had no value and our job was to get killed.” The United States could quadruple the number of troop trainers it is scheduled to deploy, but unless the systemic corruption is addressed, the fighting spirit of the front-line policemen will remain inadequate and the people remain insecure.

Similarly, Pakistan’s cross-border support of the insurgency has been known for well over a decade. I was first assigned duty in Kabul as an U.S. Army officer in 2005 and it was widely known even then that Pakistan was playing a double game. Eleven years later nothing had changed. In 2016 the House Foreign Affairs Committee held a hearing entitled “Pakistan: Friend or Foe in the Fight Against Terrorism?”

In his opening statement, Committee Chairman Rep. Ted Poe (R-TX) said that “Despite the mounting evidence of Pakistan’s collusion with global terrorism, Pakistan is among the leading recipients of U.S. foreign assistance, with Congress appropriating more than $33 billion to Islamabad since 2002.” Despite this and other fiery rhetoric in Washington, no action has been taken to curtail support for Pakistan.

As long as Islamabad knows it will not suffer consequences for supporting the insurgency—and dishonest officials in Afghanistan know there will never be consequences for their corruption—the war will continue without pause. As long as Washington continues deploying U.S. service members to fight a war that can’t be won, American men and women will continue to give their lives and blood in vain.

If Congress really “supports the troops,” as routinely claimed, and if President Trump genuinely wants to win the Afghan war, immediate changes are necessary. Fortunately, alternative policies with achievable outcomes do exist.

It therefore necessary for Kabul to promise to never support terrorists, and so long as it receives funds from the United States, reduce corruption to acceptably low levels.

It is a physical impossibility to “prevent” any terror entity from existing in Afghanistan—fortunately, U.S. security does not depend on depriving all terrorists from holding any ground everywhere in the world to keep America safe. Thus, this should not be the objective of U.S. policy; why expend billions of dollars and the lives of American service members in pursuit of an unattainable objective?

It is key to understand that it is not necessary to control ground to protect the U.S. homeland from terror attacks. Having a robust global system of intelligence, surveillance and reconnaissance (ISR), effective cooperation with the intelligence services of allied and friendly nations, and active cooperation between U.S. local, state, and federal law enforcement agencies provides the best chance to defend the United States from terror strikes.

U.S. foreign policy should be converted to a diplomacy-first approach that works with the military to contain radicalism in all its forms abroad, limits its spread and cooperates with international partners to reduce the threat in those locations over time. To the extent it is feasible, Washington should assist local populations in implementing locally derived political solutions, but the United States can’t and shouldn’t impose solutions on them. When legitimate terrorist threats to American citizens or interests are discovered, they should be dealt with swiftly and authoritatively, wherever they may reside.

By now, even the most ardent supporter of the current Afghan policy must realize that it is impossible to kill one’s way out of an insurgency. It is even less possible to kill all the terrorists abroad in an effort to keep Americans safe at home.

Additionally, stubbornly forcing such measures only expands the terror threat and gives our enemies motivation to continue recruiting and radicalizing new coverts. By withdrawing from unwinnable counterinsurgencies, murderous radicals are deprived the opportunity to confront American soldiers in locations where they can travel easily. The motivation for new recruits drops precipitously if their leaders can’t produce on these promises.