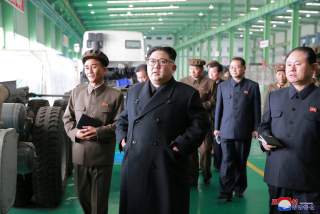 The situation with North Korea was getting critical. The lights, to use the worn-out phrase, were blinking red.

The State Department, the Defense Department and the White House were increasingly concerned either that the North Korean regime was hiding components of its plutonium program from the International Atomic Energy Agency (IAEA), or that it would exploit any negotiating track to stall the international community while improving its nuclear capacity. The motives of the Chinese, Pyongyang’s biggest trading partner and bankroller by far, were unclear—adding more complication to a problem that was already far too complicated.

The years in question: 1991 and 1992, when the George H. W. Bush administration was desperately searching for a policy to denuclearize the Korean Peninsula and place Pyongyang under the IAEA’s supervision. Thanks to the National Security Archive, last week’s declassification of over a dozen Bush-era documents on the North Korean nuclear issue demonstrates the extent to which administration officials in Washington were frantically trying to come to a consensus policy on preventing Pyongyang from becoming a nuclear power.

The documents also show, however, how little the North Korea discussion within the U.S. government has changed over the last twenty-five to thirty years. The talking points, policy proposals and memos that circulated throughout the interagency are composed of positions that are virtually identical to the Trump administration’s position today. Indeed, if one were to replace the names of North Korean, South Korean and American officials found in the documents with the officials who are now running things, you would find very little that is different.

Then, like now, the official U.S. policy on North Korea was the complete, unfettered, and verified denuclearization of the Korean Peninsula. “Nuclear weapons in North Korean hands are intolerable,” reads a March 12, 1992, State Department memo to the National Security Council. Fast forward twenty-five years and seven months and what was declared in that memo remains American policy, as enunciated late last month by Defense Secretary Jim Mattis: “I cannot imagine a condition under which the United States would accept North Korea as a nuclear power.”

Then, like now, the White House believed that the combination of economic coercion and diplomatic engagement, backed up by unity between the United States and South Korea regarding what Pyongyang would have to do if it hoped to have normalization on the table, would entice the North Korean leadership to authorize senior-level talks on its nuclear program. An August/September 1991 Pentagon paper summarizing the basic U.S.-South Korean position could easily be described as the Trump administration’s policy today: “Both the ROKG and the USG should make use of all possible diplomatic means and international pressure to bring North Korea to implement fully the provisions of the IAEA safeguards agreement.” That safeguards agreement, the paper noted, would be the first stepping stone to denuclearization on the Korean Peninsula—Washington’s overarching objective to this day.

And, as in the current environment, the U.S. government had to iron out the wrinkles and address the bureaucratic turf wars that typically categorizes much of the national-security policymaking process before a policy could be presented at the NSC, and ultimately to the president. Back in 1992, the main obstacle to settling on a consensus recommendation on the way forward was a fundamental disagreement between a State Department that sought to initiate a high-level, bilateral denuclearization-for-normalization dialogue with Pyongyang, and a Defense Department that wanted references to normalization deleted. Where U.S. diplomats saw a grand bargain with the Kim regime as essential to moving talks about denuclearization forward, the Pentagon saw the Bush administration as prematurely offering to establish diplomatic relations with a country renowned for breaking its promises.

In short, what we learn from these latest disclosures is how static U.S. policy on North Korea’s nuclear-weapons program has been. Washington’s concerns over North Korea’s sincerity and China’s cooperation date back at least to the early 1990s. None of those reservations have gone away; they hover over Washington’s policymaking deliberations like smog hangs over the Los Angeles skyline.

The major difference between 1991–92 and 2017, of course, is that the debate in the United States has ceased to focus on permanently shutting off Pyongyang’s plutonium-reprocessing program. It’s now centered on convincing the Kim regime to freeze more nuclear tests, disarming the nuclear weapons it already possesses or transferring them to the IAEA’s custody, and mothballing a program that Kim Jong-un values as the only impediment blocking the United States from doing to him what they did to Saddam Hussein and Muammar el-Qaddafi.

After over a quarter century of failure in demanding the very same concessions from Pyongyang, and relying heavily upon the same conventional strategy (more sanctions, threats of force and diplomacy on American terms), it’s time for the United States to change the policy. The longer U.S. political leaders continue to believe that denuclearizing North Korea is realistic, the longer it will take for the White House to craft a strategy to the problem that actually has a possibility of working: Cold War–era deterrence. If mutually assured destruction worked with a far larger military, economic and political power like the Soviet Union when it had thousands of nuclear missiles pointed in the direction of the U.S. homeland and U.S. forces in Europe, perhaps it can work against an impoverished, family-run enterprise where the success of every decision is judged by how it assists in keeping the Kim family business from going in the red.