Newsflash: Russia Is Not the Soviet Union 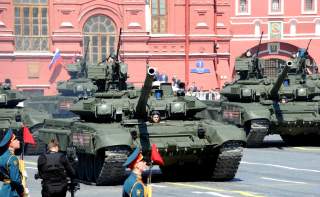 No position taken by President-elect Donald Trump more upsets leading Republican legislators than his desire to reconcile with Russia. GOP leaders routinely assert that 2012 presidential nominee Mitt Romney was right when he declared Russia “without question our No. 1 geopolitical foe.”

Perhaps in Neoconservative nightmares. But not in terms of America’s national interests.

Vladimir Putin is not a nice fellow. And obviously he’s no friend of liberal values.

But then, neither are the Saudi royals. The leaders of the Central Asian states. Egypt’s new pharaoh, General/President Abdel Fattah al-Sisi. Turkey’s sultan-wannabe, President Recep Tayyip Erdogan. And plenty of other governments with which Washington routinely cooperates while complaining very little about their brutality at home. A lamentable lack of respect for human rights does not turn a state into a threat to the U.S.

Russia today is not engaged in a global ideological battle with America. However cynical the old Communist leadership, the Soviet Union posed an ideological and moral challenge to the U.S. Many people around the world were attracted to Communism for a time, at least, and even some Americans thought they saw the future at work. Eventually the façade was irrevocably broken and the crimes were too many and too grievous to hide or dismiss.

The Russian remnant of Ronald Reagan’s Evil Empire is no philosophical heir to the U.S.S.R. Moscow offers no alternative ideology with appeal around the globe. A paltry few Americans and others apparently find appeal in Alexandr Dugin’s authoritarian nationalism, but an international movement they do not make. Marxist-Putinist thought is not the rage. Russian money may have rented some activists, politicians, and parties in Europe, but ultimately they will rise or fall on their own.

Although Putin may have viewed the Soviet collapse as a geopolitical tragedy, he originally showed no particular animus toward the U.S. He did not enter office calling America the Great Satan. No doubt he was a committed Russian nationalist even then, but his views appear to have hardened in response to Washington’s behavior.

Denizens of America’s imperial city have trouble recognizing that the rest of the world does not view their motives as pure as those of the Vestal Virgins of antiquity. Alas, from a Russian standpoint, ignoring Moscow’s Balkan interests, dismantling Slavic friend Serbia, expanding NATO to Russia’s borders, absorbing old Warsaw Pact members and Soviet republics, inviting Georgia and Ukraine to seek NATO membership, backing “color” revolutions in Georgia and Ukraine against Moscow’s interests, encouraging a street revolution against an elected, Russia-friendly president in Ukraine, and seeking to overthrow the Assad regime, a long-time Soviet ally, are not friendly acts.

Moreover, the U.S. has routinely pursued regime change against weaker foes. Skepticism of Western intentions runs far beyond the Kremlin. Anti-Americanism, at least directed at the U.S. government, is both the popular and elite view. There is no reason to believe that Putin’s fall would yield a compliant Russian government.

However fondly Putin might remember the Soviet Union, there’s no evidence he’s trying to put it back together. He certainly is no Stalin. After some 17 years in power the Russian leader’s only geopolitical booty is Crimea, long part of Russia. He also has gained influence over the largely forgettable Donbas, South Ossetia, and Abkhazia. That’s not much of a new empire. He has shown no interest in ruling over non-Russians. He apparently realizes that attempting to absorb large populations determined to resist Moscow’s rule would certainly be a losing game and likely be a disaster.

Russia does not offer the sort of global military threat posed by the Soviet Union. Moscow has reconstituted some of the former’s military power, a quarter century after the dramatic Soviet collapse, but Russia remains far behind the U.S. With one decrepit carrier, the navy has limited power projection. The air force could not seize air superiority over North America. The army has been improving its capabilities, but has no invasion route to the U.S.: leaping the Bering Strait to grab Alaska would be a bad script for the next movie iteration of Red Dawn. Nothing suggests anyone in Moscow wants to go to war with America.

Although Russia is capable of beating up on weaker neighbors, most notably Georgia and Ukraine, it has suggested no interest in general war with Europe. While Putin might be able to initially seize the Baltic States, Russia would face overwhelming odds with the U.S. and Europe against it. Europe alone is capable of defending itself, if it put real effort into the continent’s defense. For Putin to act hoping the West would abandon these three NATO members would be a wild gamble.

Moreover, mere capability doesn’t provide motive. Even “victory” would benefit Russia little. The countries would be wrecked and conquest would spark irregular resistance. They don’t have the same historical and security relationship to Moscow as does Ukraine. Yet Putin made no effort to seize the latter (or Georgia), which isn’t a member of NATO; rather, he weakened it to effectively end its chance for NATO membership.

At the same time, the cost of conflict would be catastrophic. Moscow would lose a full-scale war. In anything more limited economic sanctions and diplomatic isolation would be almost total. Even China, which emphasizes noninterference with countries’ internal affairs, would not back Moscow. It is hardly surprising that the Russian military is not deployed to launch a Blitzkrieg against the Baltics. Putin may be evil, but he does not appear to be stupid or reckless.

Russia has behaved badly toward Georgia and Ukraine, but that poses no security issue for America or even Europe. Would Washington and Brussels prefer peace and tranquility? Of course. However, the U.S. and Europe remain prosperous and secure despite the hardship visited by Moscow upon its neighbors. The fact that Washington does not approve of Russia’s behavior doesn’t make Russia a security threat or turn Russia into America’s number one enemy. Washington should not let its humanitarian sympathies dictate security policy.

Which applies even more to Syria, a tragedy with less relevance to core U.S. interests. Damascus was a Soviet ally during the Cold War. Russia is attempting to maintain a military toehold in a region dominated by America: the U.S. is allied with Israel, Turkey, Jordan, Egypt, Saudi Arabia, and the rest of the Gulf States other than Yemen. Whatever state and government emerges from the ongoing civil war will be fractured and barely a shadow of Syria’s past self. Russia’s support for the Assad regime has resulted in appalling civilian casualties, but so did the U.S. invasion of Iraq and consequent sectarian war. And so does Washington’s support for Saudi Arabia’s aggressive, brutal war against Yemen. Moscow’s Syrian role may be disreputable, but that does not mean it harms America’s interests. It certainly poses no security threat to the U.S.

Elsewhere Russia plays an independent role, with at least the possibility of being helpful. Washington has sought Moscow’s cooperation on Iran and North Korea, for instance. Islamic terrorism concerns both countries. Russia provided logistical assistance for U.S. operations in Afghanistan; indeed, Moscow has a greater interest than America in the latter’s stability. Absent sanctions, Americans would benefit from modernization of Russia’s oil production capabilities.

Moscow’s apparent cyber-attack on the Democrats—not the U.S. government—to which the Obama administration apparently plans to retaliate actually did Americans a favor, exposing wrong-doing by their own officials. And Washington officials, who routinely interfere in the elections of other nations, have no credibility claiming to be shocked, shocked to find another nation doing the same. The U.S. needs better cyber-security, but is no virgin in such challenges: Washington is thought to have used the Stuxnet virus to hinder Iran’s nuclear research and listened in on German Chancellor Angela Merkel’s cellphone. Washington should learn from the Democratic hack, not declare Russia to be an enemy.

Mitt Romney was wrong about Russia in 2012 and he is wrong today. Leading Republican presidential contenders essentially lost their minds when they advocated that the Obama administration threatened to shoot down Russian aircraft in Syria. Maintaining sanctions against Russia without the prospect of achieving anything is senseless moral vanity.

Washington’s policy toward Russia needs a genuine reset. The U.S. should take a tough but practical approach toward Moscow, recognizing that a sometimes a clash of interests does not enemies make. American officials should stop searching for new adversaries.