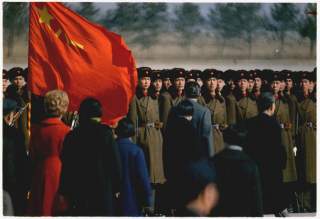 Perhaps the greatest evidence of the hubris surrounding uber-hawks, both neoconservatives and liberal interventionists, is their willingness—even determination—to make multiple enemies simultaneously around the globe. Hence their constant refrain that the world is dangerous and military spending must go up, ever up.

The United States, apparently alone, since it cannot rely upon allies which are constantly whining for reassurance, must confront China, North Korea, Russia, Iran, Cuba, Venezuela, the Islamic State, assorted terrorist movements and any anyone else who resists U.S. “leadership.” Neutral observers might find this disparate collection, several of whose members are at odds, somewhat less than a formidable threat compared to the United States, virtually every European nation, the majority of Asian industrial states, the most important and wealthiest powers in the Middle East, and the majority of the rest of the countries that are friendly to the West. Nevertheless, Americans are constantly told that the United States has never been more embattled—not, apparently, during the Civil War, Cold War, World War I, or even World War II.

Yet if the hawkish “perpetual threat” lobby really believes its rhetoric, it has only itself to blame. After all, increasingly treating both China and Russia as adversaries has achieved what was otherwise impossible: pushed the Cold War allies-turned-enemies into friends, and possible allies again.

Joseph Stalin’s Soviet Union provided vital assistance to Mao Zedong’s Communist rebels. Without Moscow’s backing, especially turning over weapons and territory to the insurgents after Japan’s August 1945 surrender, Mao might not have had the opportunity to become a nation builder—and one of the greatest mass killers in human history.

Despite some natural tensions between the two states, Mao generally accepted Stalin’s leadership. For instance, with Stalin determined to avoid a military confrontation with America, Mao’s People’s Republic of China intervened in the Korean War to preserve North Korea, which began as a Soviet client state. However, the Soviet leader died in 1953, only four years after the PRC’s creation.

De-Stalinization by Nikita Khrushchev led to ideological disputes over which government offered an uncorrupted vision of Marxist-Leninism. Mao criticized Moscow’s willingness to accept “peaceful coexistence” with the West. The Soviet leadership worried about Mao’s reckless military measures against the remnant Nationalist government in Taiwan. By 1961 the Chinese Communist Party was denouncing Soviet leaders as “revisionist traitors.” The two countries created rival revolutionary and state networks and battled for influence within nominally Communist nations. The USSR backed India against China; the latter criticized Moscow’s willingness to compromise in the Cuban Missile Crisis and join in treaty limits on nuclear weapons.

In 1966 Beijing raised the issue of “unfair” treaties imposed by the czarist Russian Empire. Border conflict broke out three years later. Casualties were modest and fighting ceased later in the year, though a formal border agreement was not reached until 1991.

Chinese-Soviet tension continued around the world, as the two backed rival revolutionary factions in several African conflicts. They disagreed over Vietnam; Beijing supported Cambodia’s Khmer Rouge regime, which was ousted by Hanoi in 1978, and fought a brief war with the latter the following year. The two Communist giants also differed in Afghanistan. Although relations in later years were not nearly as hostile as during the Mao-Khrushchev era, the vision of a unified Communist bloc had been irretrievably destroyed.

The brief Sino-Russian shooting war apparently convinced Mao that he needed to reduce tensions with at least one of the PRC’s potential adversaries, opening the way for the Nixon administration. Rapprochement between the United States and China began with Richard Nixon relaxing trade and travel restrictions on the PRC in 1969. The same year, Beijing and Washington resuscitated the Sino-U.S. ambassadorial Talks. Nixon also used Pakistan as a diplomatic intermediary, which reported Chinese interest in improving bilateral ties.

In 1971 the two countries engaged in so-called “ping-pong diplomacy,” with the visit of an American table tennis team to China, while Nixon eliminated the last travel limits. National Security Adviser Henry Kissinger surreptitiously visited Beijing as part of an official trip to Pakistan in July 1971, setting in motion a second visit in October and U.S. support for the PRC’s entry into the United Nations and possession of the Chinese Security Council seat. Richard Nixon’s famed visit to China came in February 1972. He told Mao: “You are one who sees when an opportunity comes, and then knows that you must seize the hour and seize the day.” Actually, both leaders did so.

Although formal diplomatic ties (which required ending official relations with the Republic of China on Taiwan) did not come until 1979, under President Jimmy Carter, the United States and PRC continued to expand contacts and commerce. In no way were the two countries military allies. But Washington effectively neutralized one potential security threat and prevented the recreation of a Sino-Soviet coalition against the United States. Geopolitically, America gained flexibility and leverage in confronting the USSR. Washington could enjoy global preeminence, if not dominance, at lower cost.

Chinese-Russian relations improved as the Cold War ended and ideological conflicts waned. But tensions remain real. Beijing shows as little respect for intellectual property when it comes to Russian weapons as it does for Western consumer goods. The Central Asian republics were part of the Soviet Union, but increasingly are drawn to China economically. Russia’s Far East is virtually unpopulated, giving rise to fears of Chinese territorial absorption.

However, under President Barack Obama, the United States has courted conflict with both powers. To constrain China, the administration staged the “pivot” or “rebalance.” Washington strengthened alliance ties, added troop deployments and increased military maneuvers. The resources involved have been sufficient to irritate but not enough to scare the PRC. Beijing perceives that Washington hopes to contain China, whether or not the former is willing to admit the obvious.

Against Russia, the United States has followed what appears to be an overtly hostile policy: dismissing the former’s Balkan interests, especially breaking apart historic Slavic ally Serbia (which imperial Russia backed in World War I); bringing old Warsaw Pact members and even Soviet republics into NATO, with invitations seeming likely for Georgia and Ukraine (the latter an integral part of both the Russian Empire and Soviet Union); supporting “color” and street revolutions against Russian-friendly governments in Georgia and Ukraine; pushing regime change, including by Islamist insurgents, against Moscow’s Syrian ally; imposing economic sanctions against Russia; and building up U.S. military forces in Europe. Washington might believe all of these policies to be warranted, but no serious Russian patriot could view them as friendly.

The result has been greater cooperation between China and Russia. They are not formal military allies, but have found their dislike and distrust of Washington to be greater than their bilateral disagreements. In the short term, that means cooperating to limit American influence.

Ultimately the objective could become to deter U.S. military action against both nations. Although Washington, with allied support, today should be able to simultaneously defeat the two (short of unconditional surrender), American dominance will fade. Should Russia and China forge closer military bonds, the United States eventually might find itself facing a much less hospitable international environment. That likely would constrain Washington’s responses, and increase the costs and risks if conflict resulted.

America is a great power. But it should not needlessly create enemies and encourage them to ally with each other. If Donald Trump succeeds in improving relations with Russia, he would have the salutary side effect of discouraging creation of a common Russo-Chinese front against the United States. Richard Nixon’s China policy offers a model for the incoming Trump administration: Make up with at least one of the important powers potentially arrayed against America. The United States should not feel the need to take on the rest of the world.