No, a new surge isn’t the solution to ISIS 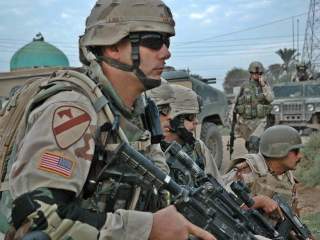 How do you solve a problem like ISIS? To hear Sen. John McCain (R-Ariz.) tell it, the solution is putting huge numbers of American troops on the ground in the Middle East right now.

“I bore witness to the failed policy of gradual escalation that ultimately led to our nation’s defeat in the Vietnam War,” McCain recently wrote to Secretary of Defense Ashton Carter. Now, he added, “I fear this administration’s grudging incrementalism in the war against the Islamic State (ISIL) risks another slow, grinding failure for our nation.”

Though McCain’s letter brings up some important points—like how many Americans are presently on the ground in Iraq, a figure about which the White House has been exceedingly imprecise—his central contention is made with no regard for cost, consequence, or recent history. It is an irresponsible approach to foreign policy that the last decade and a half has found more than wanting. Indeed, the whole war on terror is arguably a “slow, grinding failure,” and throwing good money after bad isn't going to change that. Worse yet, what McCain proposes is exactly what ISIS itself hopes to provoke, while polling data suggests it will only turn local hearts and minds against us.

There was a time, perhaps, when McCain’s argument would have been less absurd. That time was before we’d spent trillions (and mysteriously lost billions) of dollars on fifteen years of quagmire—all while the $19 trillion national debt mounts ever higher, no matter which party is in charge. It was before we’d deployed hundreds of thousands of Americans halfway around the globe to fight wars which seem to have no end in sight. It was before nearly 8,000 of them died in the process.

It was before Washington brought the war on terror home by running roughshod over the Constitution (plus rule of law more broadly) with mass surveillance of innocents and groping of babies and old ladies at the airport. It was before we conducted so many airstrikes on ISIS that our military is now literally running out of bombs.

It was before we’d done precisely the sort of surge McCain seems to be advocating only to end up a few years later plagued by ISIS anyway.

It was before we realized the sort of reckless foreign policy McCain avows isn’t all it’s cracked up to be. It’s not affordable; it’s not restrained; and it’s certainly not effective.

On top of all that, lengthy foreign intervention is just what ISIS wants to provoke with its brutality. “They are aching for a conflict with the West,” explains Dr. Peter Neumann of the International Centre for the Study of Radicalisation. The gut-wrenching execution videos and attacks in Europe are “bait to provoke an over-reaction,” Neuman adds. “As soon as there are Western boots on the ground it then becomes the old narrative of the West versus Islam and they can claim they are fighting the occupation. They are trying to suck us in.”

If we follow McCain’s advice and ship off tens of thousands of Americans into harm’s way, we will be giving ISIS what it wants, allowing it to set the terms of engagement and frame the fight as local autonomy against western imperialism.

And even though State Department research has found that “nearly all Iraqis have unfavorable views of [ISIS] and oppose its goals and tactics, with no significant variation across religious sects and ethnic groups,” that doesn’t mean they want more western intervention. On the contrary, the same State report revealed, “around half of Iraqi Sunnis and Shia”—categories which include the vast majority of the country—“now say that they completely oppose” the U.S.-led coalition against ISIS.

In other words, they understand and reject ISIS’ cruelty and hate, but they still want American intervention in their homeland to end.

In this light, McCain’s surge advice becomes even more preposterous. Is it really wise to spend more blood and treasure to play into the plans of terrorists and foist our assistance on a population that doesn’t want it? No reasonable observer could honestly answer “yes.”

Bonnie Kristian is a fellow at the American Security Initiative Foundation. She is a contributing writer at The Week and a columnist at Rare, and her writing has also appeared at Relevant Magazine and  The American Conservative, among other outlets.