No, the Libya Intervention Wasn't a Humanitarian Success 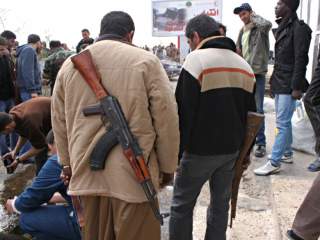 Writing in Vox, Shadi Hamid attacks the “prevailing wisdom” that Libya’s chaos means that the 2011 U.S. military intervention there failed. That view, Hamid says, revises the coalition’s objective. The point was never stable democracy—an impossible standard in Libya—but to protect civilians from being massacred.

Hamid, an early advocate of bombing on behalf of Libya’s rebels, deserves credit for at least defending his position. Others who championed Libya as a model intervention turned their attention elsewhere as it deteriorated. Unfortunately, Hamid’s argument ignores the stated rationales for intervening, including his own, relies on a factually-challenged counterfactual to examine the consequences of staying out, and dodges the analysis of critics who predicted how intervention would increase Libya’s disorder.

A large record contradicts Hamid’s contention that democratization was never a goal of intervention. It’s true that the UN Security Council Resolution authorizing the bombing speaks of protecting civilians, not overthrowing the regime or democracy. But that was compromise language needed to win allied support. As Micah Zenko notes, U.S. actions show that regime change was always a de facto U.S. goal. Recent news reports suggest that U.S. officials understood from the get-go that bombing Gaddafi’s forces would likely embroil the United States in regime change.

Hamid himself took this view in 2011, when he argued that the objective of the intervention he favored was “not to pressure Qaddafi and his sons but to support pro-democracy forces and encourage…regime change.” When the regime fell, he called it a “powerful demonstration,” for other protesters and revolutionaries trying to democratize Middle-East and saw a “model” for intervening in Syria. He credited the intervention for delivering “newfound freedom” to Libya and argued that the United States had to stay engaged to promote democracy there.

U.S. leaders also offered democratization as a reason for bombing. On March 28, 2011, President Obama argued that intervention supported “universal rights, including the freedom for people to express themselves and choose their leaders…governments that are ultimately responsive to the aspirations of the people.” The next day, then Secretary of State Hillary Clinton made the same point: “While our military mission is focused on saving lives, we must continue to pursue the broader goal of a Libya that belongs not to a dictator, but to the Libyan people.” Testifying before the Benghazi Committee last fall, Clinton again gave Libyans’ democratic aspirations as a reason why the United States helped overthrow Gaddafi. There is no shortage of similar quotes from the U.S. and European leaders promoting the intervention.

Hamid’s claim that the intervention succeeded in its humanitarian aims has two parts. One holds that bombing stopped regime forces from massacring civilians in Benghazi. Hamid’s evidence for this is that Gaddafi threatened to kill the protesters like cockroaches and that his forces were headed for Benghazi where many protestors lived. The second point is that, without intervention, Libya’s civil war would have become like the more violent one in Syria. The basis for that contention is essentially that Syria’s trouble occurred “in the absence of U.S. intervention.”

Like James Steinberg, the former Deputy Secretary of State who made a similar argument last fall, Hamid is either ignoring or unaware of arguments poking holes in those claims. As people like me, Daniel Larison, Steve Walt, Steve Chapman and especially Alan Kuperman point out, when Gaddafi’s forces had the chance to slaughter civilians in rebel towns, they committed some war crimes, but did not engage in wholesale slaughter. And Gaddafi’s frightening talk of slaughtering rats and cockroaches referred to armed rebels, not protestors. If there’s a contrary translation, I’d like to see it.

It’s certainly possible that Libya’s rebels would have hung on absent intervention, but tough to see why the war would have escalated to Syrian proportions. A more likely outcome is that casualties would have continued at roughly their 2011 pace— about one-fifth the annual toll in Syria. And of course, we did intervene in Syria on behalf of rebels, helping the weakest side and thus likely exacerbating the conflict.

Those taking the Steinberg/Hamid line should contend with Kuperman’s detailed analysis in International Security and Foreign Affairs. He suggests that the intervention backfired from a humanitarian perspective because the most likely outcome without intervention was a regime victory. It follows that intervention prolonged the civil war, costing thousands of lives. Remember that the push to intervene in March 2011 came because the regime seemed poised to win.

Hamid says that because the coalition could have done more to aid Libya’s transition, outside intervention cannot have caused the collapse of its state. Saying otherwise, he insists, requires a belief that the collapse was inevitable once the intervention began. But causality comes in shades short of sufficient conditions. Intervention made the state’s collapse likely by sweeping aside the existing order and handing power to disorganized militias.

Libya’s absence of civil society and institutional backbone, which Hamid mentions, is a reason scholars expected that intervention there would heighten disorder. In 2011, some State Department officials, though not their boss, held similar views. The autocrats that U.S. military interventions lately overthrow tend to hold together weak states, prone to discord in their absence. Well before we tested the theory in Iraq, history suggested that even energetic outside efforts to restore order, let alone install democracy, tend to fail.

Hamid evidently rejects those arguments, believing that the trouble with our armed state-building is insufficient effort. It would be interesting to hear why, along with his reasons for rejecting the evidence that no mass slaughter was imminent in Libya. Articles that purport to take on critics of the Libya intervention should engage with their actual arguments.