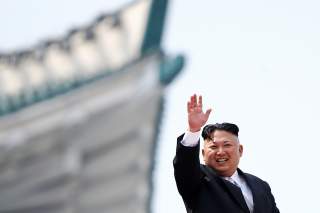 President Donald Trump demonstrated his contempt for the law in naming North Korea as a state sponsor of terrorism. But he only followed precedent. Also listed are Iran, Syria and Sudan, yet none of them underwrites terrorism, let alone against America. But the designation is a matter of politics, not policy.

The Democratic People’s Republic of Korea is an awful regime: it violates its people’s human rights, is developing a nuclear arsenal, and decades ago launched terrorist attacks against South Korea. But it has not engaged in terrorism for years.

Over the years advocates of tagging the DPRK as a terrorist state have cited a long list of misdeeds, including “duplicity in its negotiations with the United States” and defiance of “the international community.” If duplicity and defiance justified a designation as a terrorist sponsor, every government, including Washington, would be in the dock. There also was North Korea’s 2014 hack of Sony Pictures, which was odious, but not terrorism. (Under that standard Washington’s apparent use of computer viruses against the Iranian nuclear and North Korean missile programs would constitute . . . terrorism.)

President Trump cited the murder of Supreme Leader Kim Jong-un’s half-brother. It almost certainly was carried out on Kim’s orders. But that was an individual assassination, for very practical political ends—to deny China a potential frontman with “royal” blood for a possible alternative regime. The president also pointed to the death of American college student Otto Warmbier. He deserved far better, but neither his doctors nor the coroner found evidence of torture, and even torture—employed by a number of America’s allies, including Egypt and Turkey—is not terrorism. The North is a bad actor, but that doesn’t make it a state sponsor of terrorism.

Indeed, the designation long ago lost all meaning. There are possible targets—Pakistan and Saudi Arabia, for instance, which have furnished abundant money and people for terrorism. Some of the other Gulf States, U.S. allies all, have been lax, at best, in cutting off funds for terrorist groups. But none of them are, or ever were, listed.

In contrast, Cuba was on the list until President Barack Obama removed it; Cuban-Americans were more likely to use terrorism against Havana than the Cuban government was to use terrorism against America. Sudan is on the list even though its involvement in terrorism is decades old; indeed, Washington officials admit that Khartoum has been helpful in fighting Islamic radicals and in January dropped other, longstanding economic sanctions.

Syria and Iran also are on the list. Both have been bad actors—along with Iraq, Saudi Arabia, Egypt, Libya, and plenty of other nations in the Middle East and elsewhere. But neither Damascus nor Tehran underwrites terrorism as commonly understood. They have supported Hamas and Hezbollah, but for geopolitical reasons: the latter two are quasi-governments that control territory, and, notably, have never targeted America. (The 1983 attacks on the U.S. embassy and Marine Corps barracks in Lebanon predate Hezbollah’s creation and really weren’t terrorism, since they responded to U.S. military intervention in the ongoing civil war.)

More specifically, the State Department cites Syria’s failure to crack down on terrorist financing. Yet as noted earlier, America’s Gulf State allies—Saudi Arabia, United Arab Emirates, Qatar and Kuwait—all have far greater problems in that regard. Why aren’t they designated?

Even more bizarrely, Washington blames Iran for taking advantage of the opportunity provided by the Iraq invasion and working with Shia groups in Iraq—which effectively joined the United States in battling the Islamic State. Finally, the State Department terrorism report targets Iran’s support for Yemeni Houthis, involved in a civil war in which the United States has aided intervention by Saudi Arabia and UAE, which have killed thousands of civilians. By this standard, Presidents Barack Obama and Donald Trump should be in the dock for their aid for Saudi “terrorism.”

The DPRK was delisted in 2008 by the Bush administration, which flipped its policy toward Pyongyang from isolation to engagement. As noted earlier, the North has committed plenty of bad acts. But the Kim dynasty’s last true terrorist attack was in 1987. (For removal from the list the statute requires not having provided any support for terrorism for at least six months.) The North should have come off the list years long before 2008.

Nothing has changed over the last decade. Redesignating Pyongyang is a political act, a declaration that the DPRK is on Washington’s naughty list. President Trump insisted that the North “must end its unlawful nuclear and ballistic missiles development,” a worthy political end, but it has nothing to do with terrorism. An unnamed State Department official admitted to CNN that the label was “part of the administration’s maximum pressure strategy.” No surprise. The Congressional Research Service earlier admitted: “historically, diplomatic and policy considerations appear to have played a prominent role in the State Department’s decisions about the DPRK’s place.”

Moreover, the designation is primarily symbolic, with little practical impact. The listing triggers a set of economic sanctions, limiting dealings with the targeted government, banning trade in specific goods, lifting sovereign immunity in any lawsuits from terrorist victims, and requiring U.S. representatives to oppose aid from multilateral development banks. However, none of these matter much since North Korea already is subject to a broad range of bilateral and multilateral sanctions. Admitted Secretary Tillerson: “we already have many of these actions in place.”

The North is one of the worst governments on earth. Calling it names is tempting. But the president’s terrorism designation is dishonest, a misuse of the law for political purposes.

Worse, the president’s action further discourages diplomatic contact with Pyongyang, which is ever more essential in the midst of rising tensions, and especially threats of war. The administration already has made talks almost impossible by demanding that the North agree to Washington’s terms before negotiations start. In announcing the terrorism designation, Secretary of State Rex Tillerson said that the United States still desires diplomacy, but the president previously repudiated the secretary’s call for talks. Unfortunately, argued Mintaro Oba, a former Korea desk officer at the State Department, the terrorism designation “will be seen in Pyongyang as confirming the United States is not serious about negotiations.”

The president obviously could lift the designation if the United States and DPRK reached an agreement. However, calling a regime “terrorist” treats it as beyond the pale. That’s why other nations, including Russia and Syria, also use the label against their enemies, irrespective of the facts. Communication between Washington and Pyongyang has become less likely even as it has become more essential.

Closing the diplomatic door in this way may make China less willing to toughen its policy. Beijing is unhappy with its nominal ally and has steadily tightened sanctions, but always has insisted that the United States engage the DPRK and reduce the “hostile” environment that has encouraged the North to go nuclear. The administration’s terrorism designation moves in the opposite direction.

Instead of making a mockery of the terrorism designation, the Trump administration should apply the law as written against North Korea and other nations. If Washington wants to impose additional sanctions, it should do so directly. There are no good solutions for the DPRK. Misusing the law certainly is not one.

Doug Bandow is a senior fellow at the Cato Institute. A former special assistant to President Ronald Reagan, he is author of Tripwire: Korea and U.S. Foreign Policy in a Changed World.