North Korea Does Not Trust America for a Pretty Good Reason 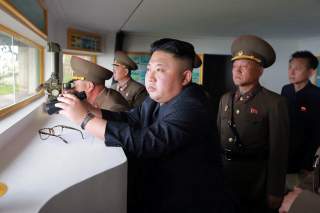 North Korea obviously wants to be a nuclear power with the ability to deter the United States. Secretary of State Rex Tillerson sought to reassure Pyongyang about America’s intentions. Unfortunately, however, Kim Jong-un would be a fool to believe any promises made by Washington. Only actions are likely to convince him.

In recent days Secretary Tillerson has gone on a charm offensive directed at the Democratic People’s Republic of Korea (DPRK). He said America is not the DPRK’s enemy and Washington is not seeking regime change. The implication is that Kim should relax, agree to give up his nukes and missiles, and enter into a beautiful new friendship with America—just like Muammar el-Qaddafi did back in 2003. Okay, maybe not Qaddafi, but surely the North Korean Supreme Leader gets the point.

The problem is, Kim almost certainly does get the point. And that doesn’t help Secretary Tillerson or the Trump administration.

Imagine trying to maintain the Kim dynasty, now on the third generation, in today’s world. The DPRK remains desperately poor; a bad harvest threatens the countryside with malnutrition and hardship. The North is locked in a long-term competition with South Korea, which has around forty times the GDP and twice the population. Moreover, Seoul is defended by the world’s sole superpower, which routinely runs aircraft carriers along North Korea’s coast and flies bombers over North Korea’s cities. Pyongyang is friendly with Russia and nominally allied with China, but neither of its traditional protectors likely would save the DPRK from internal collapse or external aggression.

The way forward surely involves some economic reform, which Pyongyang is undertaking. But too much economic liberty could undermine the totalitarian political order. The People’s Republic of China (PRC) is willing to help, but Beijing does little for free. Kim wants to rule an independent nation, not a de facto PRC province. Whatever Moscow does likely will reflect its relations with America, since relations with the DPRK are more a means to inconvenience Washington than than a positive end. Ultimately, the North can only depend on itself.

For that purpose, nukes and missiles obviously are helpful. They certainly offer a comparatively cheap means of defense, given the impossibility of matching the Republic of Korea and United States in conventional forces. Affirming the North’s strategy are the squeals from Washington policymakers who fear not so much of being attacked, but of being prevented from attacking the DPRK without consequence.

There are other reasons Kim might want his country to become a nuclear power—international status, opportunities for neighborly extortion, strengthening the military’s allegiance to the family dynasty. However, long-range missiles only make sense as a means to confront the United States. If Washington wasn’t threatening North Korea, Pyongyang would prefer to ignore the hyper-power half-way around the globe. Since that’s not the case, the North logically wants to be able to bring the war home to Americans.

Thus, Tillerson hopes to convince the DPRK leadership that it has nothing to worry about. It is a worthy intention. If only Kim felt safe, he would disarm and embrace Uncle Sam. Or something like that.

Should Kim believe Secretary Tillerson? No knock on the secretary, but diplomats and their equivalents have been lying since the first negotiation at the beginning of time. Who can imagine the secretary instead declaring that the DPRK tops America’s target list for regime change? Whatever Secretary Tillerson actually believes, he will say he is for peace.

Even if Secretary Tillerson is truly inclined in that direction, why should anyone believe the same of President Donald Trump? The two have disagreed on a host of issues—how to approach to Europe, the value of the Iran nuclear deal, blame among the feuding Gulf States. As president, Donald Trump can set policy if he chooses. Having already threatened war and talked of sending armadas to the region, the president could easily overrule his secretary of state and opt for war.

Alas, no one knows what the president believes. He accused the South Koreans of cheating the United States by free-riding, called Kim a “smart-cookie” he would be honored to meet, affirmed the alliance, suggested that Kim was insane, tried to subcontract the North Korea problem to China, dismissed the alliance as of no value, promised to act alone against the DPRK. What foreign leader would trust President Trump to take a position—any position—and stick with it?

Moreover, the North Koreans surely are not ignorant of the strong war party in Washington whose members do the Maori Haka whenever a possible conflict appears on the horizon. Senators John McCain and Lindsey Graham have been talking up the likelihood of war. The latter said he expects President Trump to act if Pyongyang does not yield. Even if the DPRK abandoned its nukes, American politicians soon might be back advocating military action. Only a couple years before the ouster of Qaddafi, McCain and Graham had dinner with the Libyan leader in Tripoli and suggested the possibility of foreign aid to reward him for his cooperation against Al Qaeda. Soon thereafter they were pushing for military action to oust him.

Nor is it enough to believe that President Trump won’t change his position, whether under pressure or not. President George W. Bush struck his deal with Qaddafi after ousting the leaders of Afghanistan and Iraq. But Bush kept his word and left Libya alone.

That changed in the next administration. The 2011 Arab Spring gave the Obama administration its opportunity to defenestrate the Libyan dictator. In the name of humanitarianism, even though Qaddafi had neither targeted nor threatened civilians—his infamous speech was directed against armed insurgents—the United States and Europeans pushed regime change. Never mind past deals and discussions of aid. Qaddafi was vulnerable and the allies struck.

No one knows who will follow President Trump. It could be an uber-hawk Republican. Moreover, Hillary Clinton could run again. Her comment on Qaddafi’s end, delivered while laughing, was “we came, we saw, he died.” If Kim disarmed, what would prevent a change of position in Washington similar to that toward Libya?

Of course we would be better off if the Kims went the way of the Ceausescus, Romanovs, Habsburgs, and other ruling dynasties. However, like others before them, they are not likely to go voluntarily, quietly or peacefully. To the extent they believe they are threatened, they will amass the tools necessary to resist their ouster. In North Korea’s case that means nukes and missiles.

If Secretary Tillerson wants to convince Kim Jong-un that the United States does not seek the North Korean dictator’s ouster, America needs to act the part. That means reducing obvious military threats against the DPRK: warnings of potential attack, comments that all options are on the table, bomber overflights, carrier sail-byes, military exercises, bases and garrisons, and the like.

More important, Washington should bring home its troops from South Korea. It is the bilateral alliance which puts American military units up against those of the North. The Republic of Korea is capable of defending itself. Seoul should construct the military and adopt the policies necessary to deter the North from attacking and win the war if one erupts. That could include South Korean nuclear weapons as an alternative to the United States providing a so-called nuclear umbrella over South Korea. If Washington was not aiming its forces at the DPRK, the Kim regime would not be aiming back.

Secretary Tillerson has the right idea in trying to reassure North Korea about America’s intentions. But Kim would be foolish to believe verbal assurances by someone who may not even speak for his own administration, let alone for the U.S. government over the long-term. American conduct must change. Only if Washington stops targeting the DPRK is the latter likely to see no need for a nuclear deterrent against America. Washington policymakers must decide if they believe defending South Korea is worth endangering the American people.