North Korea Is Starting to Look Like the Ottoman Empire 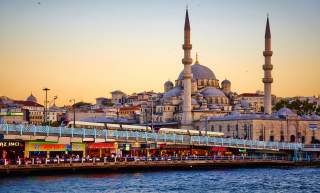 Kim Jong-nam, the older half-brother of North Korea’s young leader, Kim Jong-un, died at Kuala Lumpur airport while preparing to leave for Macau. He reportedly was injected or sprayed with poison by two unidentified women, presumed to be North Korean agents. If true, it seems Kim Jong-un is tying up loose ends, eliminating a family heir who might have been used to legitimize a successor regime.

The Democratic People’s Republic of Korea (DPRK) always has looked a bit like the Ottoman Empire, with a plethora of “royal” children and other close relatives competing for power. Until Kim Jong-un, however, family members might lose authority and disappear from public view, but they were not murdered, which was common practice among Ottoman sultans.

Kim Il-sung, selected to be the Soviet Union’s man in Moscow’s occupation zone in the aftermath of World War II, proved to be an adept politician. He soon freed himself from Soviet control and downplayed China’s saving role in the Korean War. In subsequent years he purged his opponents, including those loyal to both Moscow and Beijing. After winning absolute power he created one of the world’s most singular personality cults.

For a time Kim’s brother looked like the heir apparent. But he was superseded by Kim’s eldest son, Kim Jong-il. However, the younger Kim’s rise was not certain; after his mother died Kim Il-sung had another family. Kim Jong-il reportedly bonded with his sister, Kim Kyong-hui, over their fear of being discarded by their father. On taking power Kim Jong-il kept half-brother Kim Pyong-il in effective exile, far from the power centers at home, as an ambassador to various eastern European nations.

Kim Jong-il also had more than one wife (or consort, since it is not known which if any relationships were formalized). His oldest son, Kim Jong-nam, long thought to be heir apparent, apparently fell from favor in 2001 after attempting to enter Japan on a forged passport to visit Disneyland (really!). He ended up in gilded exile, living mostly in Macau.

The eldest of Kim Jong-il’s other two (known) sons, Kim Jong-chol, reportedly—of course, like much else in North Korea, verification is impossible—was thought by his father to be effeminate. He holds a party position, but appears not to be a power factor in Pyongyang. Instead, the mantle of leadership fell upon Kim Jong-un, apparently just short of twenty-eight when he succeeded his father in December 2011.

Kim Jong-un so far has swept aside all family competitors. His older brother appears to be of little political import; Kim relies more on his sister, rather like his father relied on the latter’s sister. Kim Jong-un’s stepmother disappeared from view shortly after he took over. He recently moved his stepuncle from Poland, where he was about to become dean of the diplomatic delegation, to the Czech Republic. Observers surmised that the move was intended to sever the diplomats’ accumulated international connections.

Most dramatically, in December 2013 Kim had his uncle by marriage, Jang Song-thaek, Kim Kyong-hui’s husband, executed. Her fate was unclear, though she disappeared as a power factor.

Jang and Kim Kyong-hui reportedly married against Kim Il-sung’s wishes. But once incorporated into the Kim clan Jang gained influence, only to disappear at one point, apparently purged for some perceived offense. But he later reappeared. He suffered a similar fate under brother-in-law Kim Jong-il, perhaps for accumulating too much authority. However, he acted as Kim’s stand-in after the latter suffered a stroke in August 2008. Later Kim supposedly restricted Jang’s authority, perhaps to ease Kim Jong-un’s rise.

Nevertheless, Kim Jong-il tagged his sister and brother-in-law as mentors of some sort for Kim Jong-un, but that arrangement lasted barely two years. No one knows exactly what happened—Jang may have reached for supreme power, been too close to the Chinese, pushed for greater reform than Kim Jong-un would accept, have antagonized the military and other powerful domestic factions, or some combination of the above.

Whatever the case, Kim Jong-un broke with family precedent and very publicly had Jang killed, which required a de facto admission that the supposedly infallible leaders had kept a dangerous enemy of the North Korean people at the center of power for decades. Jang’s execution dramatically demonstrated that no one was safe.

Now comes Kim Jong-nam’s apparent murder. He was critical of the regime and supposedly had been warned by Jang to keep quiet. Reports circulated of assassination attempts while he lived in Macau. At least for a time he had Chinese bodyguards. Despite one arrest so far, it might be difficult to prove that he was murdered on Kim Jong-un’s orders. The apparent assassination reinforces the message that no one is beyond the latter’s reach while a potential rival, no matter how seemingly distant, has been eliminated.

More interesting is what the killing might suggest about Kim’s hold on power. Executions of top officials appear to have slowed while elite defections are on the rise. The former deputy ambassador in London recently claimed that dissatisfaction with the Kim dynasty is widespread. That’s plausible, though past defectors have demonstrated a willingness to say what they believed their hosts wanted to hear, and presumably people in a position to escape the DPRK would be among the most circumspect in what they say to others.

Perhaps more important is what the event suggests about Kim’s mind-set. He must either have been greatly offended by his half-brother’s criticisms, which received little attention in the West, especially amid the flood of critical commentary from others, or worried that Kim Jong-nam could have spurred some form of opposition to the present regime, which would seem to have been a long shot, given the latter’s long absence from the North. Indeed, Kim Jong-nam’s presence in Malaysia, apparently without security, suggested his distance from any opposition activities.

It may be that Kim Jong-un veers toward paranoia and simply doesn’t believe in taking even tiny chances. Ironically, this attention to detail might strengthen his position. Nevertheless, Kim Jong-nam would only appear to have been dangerous had the regime suffered from significant weaknesses at home.

Despite his relative youth and lack of lengthy preparation to succeed his father, Kim Jong-un has demonstrated a ruthless determination to acquire and hold power. So far, at least, he’s also played China well, moving forward with both economic development and nuclear weapons despite flaunting Beijing’s desire for stability on the peninsula.

The impact of the killing of Kim Jong-nam on the ongoing game of Korean chess remains to be seen. But Kim Jong-un remains in charge in Pyongyang and will present President Donald Trump with one of the latter’s greatest foreign challenges.