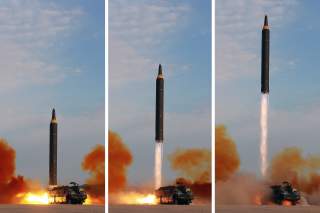 The Trump administration may or may not have a negotiating strategy with the North Koreans in the works. The amount and extreme pace of diplomatic activity on the Korean Peninsula over the past four months (Secretary of State Mike Pompeo just returned from his second trip to North Korea with three American prisoners in tow), coupled with President Trump’s acceptance of Kim Jong-un’s offer to meet, has forced the White House to quickly put a plan together.

One man, however, has a very specific framework in mind. Appearing on Fox News last Sunday, National Security Advisor John Bolton brought up what can be called the Libya scenario, in which former dictator Muammar el-Qaddafi not only came clean to the Americans and the British about his weapons-of-mass-destruction programs, but allowed Washington to airlift his equipment and documents out of the country for destruction.

The only issue with Bolton’s proposal is that it is technically incompatible with where Pyongyang’s nuclear weapons program is at the present time and fanciful from a diplomatic perspective. To believe that the North Koreans would permit Americans to prowl around their country and freight away their nukes in exchange for the suspension of U.S. sanctions is nothing more than an exercise in disbelief.

Those who talk as if a Libya-style denuclearization option is realistic for the North Koreans today forget just how rudimentary, if not embarrassing, Tripoli’s nuclear program was at the time it was being destroyed. While a British official told the New York Times that Libya’s nuclear research-and-development program was close to producing a bomb at the time the agreement with Qaddafi was struck, the nuclear specialists who were responsible for disposing that material have described on the record just how unimpressive it was. Donald Mahley, the Bush administration’s pointman for disarming Qaddafi, commented that he was surprised at how little the Libyans seemed to invest in the effort. “Though the Libyans I dealt with were knowledgeable, dedicated, and innovative,” Mahley said, “there was almost no bench.” A small circle of scientists and engineers ran the program, a far contrast from what Van Jackson of Victoria University of Wellington has described as North Korea’s “nuclear ‘industry’ of scientists, engineers and warfighters, and a corresponding maintenance and supply chain.”

Whereas the Kim dynasty has been—and as far as we can tell, remains—devoted to its nuclear weapons program in word and in deed, Qaddafi’s regime was divided internally about the wisdom of attaining such a capability. As Malfrid Braut-Hegghammer revealed in her new book, Unclear Physics: Why Iraq and Libya Failed to Build Nuclear Weapons, there was a vocal faction within the Qaddafi government (led by Qaddafi’s favorite son, Saif al-Islam) that questioned whether a latent nuclear capacity was worth the pain of international political and economic isolation. Muammar el-Qaddafi eventually came to the conclusion that ditching the effort and alleviating the economic pressure on Tripoli was a more thoughtful course of action for his political survival than continuing to develop a program that was entirely dependent on foreign suppliers (a decision that Qaddafi and his son would regret eight years later).

How do we know Libya’s nuclear development was a largely wasteful drain on the regime’s finances? Because the International Atomic Energy Agency largely confirmed it when its inspectors went into the country to poke around Libya’s facilities. A 2004 IAEA report was full of examples of just how haphazard and broken Qaddafi’s nuclear research was. In one finding, the agency discovered that Libya never acquired the domestic knowledge to domestically produce centrifuges or the skill to enrich uranium. It also did not have a clue about nuclear warhead designs; while the Libyans did receive documents and specks about warheads, “Libya stated that it had no national personnel competent to evaluate the data and would have asked the supplier for help in the event it had opted to take further steps to develop a nuclear weapon.” In layman’s terms: Libyan engineers were not very good.

When the time came for Washington and London to destroy Qaddafi’s program, the Bush administration was able to accomplish the task in less than six months. Part of this was due to the diligence and ingenuity of the American team on the ground, but another reason for such quick success was because the Libyans hardly began the process of bomb development. Robert Einhorn, a nonproliferation specialist and former State Department official in the Obama administration, summed it up this way: “Libya hardly had a nuclear weapons program. It had crates with centrifuge parts it didn’t know what to do with. U.S. transport planes could land and carry the entire ‘program’ away.”

Muammar el-Qaddafi was a beginner in the nuclear game. He was a bumbling amateur who wasn’t privy to the talent and resources required for an indigenous nuclear weapons research-and-development industry. North Korea is not only way, way ahead of where Tripoli ever was—they are already a nuclear-armed state, even if the United States and the international community fail to officially recognize it as such. Pyongyang has a deterrent that Qaddafi tried for thirty years to purchase, the major difference being that the “treasured sword” of nuclear Damocles was always valued by the Kim regime as exponentially more important to its preservation than making nice with the West.

If John Bolton is looking for a workable framework for the upcoming nuclear talks with Pyongyang, then the Libya model isn’t it. Qaddafi may have felt squeezed after decades of sanctions and grew scared about becoming the next Saddam Hussein, but Kim Jong-un has no intention of becoming the next Qaddafi—a man who was dragged out of a storm drain like a stray dog, mercilessly assaulted and executed. The sooner Bolton and the rest of the Trump administration get that reality into their heas, the more prepared they will be when the North Koreans slow-roll the nuclear negotiations or refuse to part with their operational nuclear deterrent.