Is North Korea's Military the Ultimate Paper Tiger (That Could Still Kill Millions)? 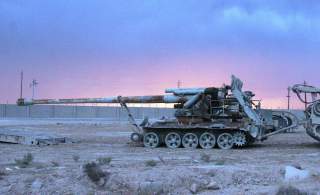 Iran’s regional aggression. Budget turmoil at home. Domestic politics. An establishment in Washington resistant to reform. Ongoing wars in Iraq, Syria and Afghanistan. President-elect Donald Trump will have all of this to focus on and more, including the possibility of a Republican Party—a party that, let’s be honest, wasn’t especially happy that Trump won the GOP nomination—opposing a Trump White House on the construction of a border wall and on a trillion-dollar infrastructure plan.

None, however, will come as close on the Richter scale as rising instability on the Korean Peninsula, powered first and foremost by a North Korean nuclear and ballistic-missile program that is advancing in both quality and quantity. Indeed, just like his predecessor, Trump comes to office dealing with a North Korean government that isn’t particularly interested in negotiating its nuclear deterrent away—except today, Pyongyang for all intents and purposes is a nuclear-weapons state, whether Washington will accept that reality or not.

How might a Trump administration go about dealing with the North Korean issue? The typical options are on the table: more stringent economic sanctions on Pyongyang’s revenue sources; unconditional dialogue with the North Korean leadership; third-party sanctions on Chinese entities enmeshed in DPRK dealings; and, in the most extreme case, a preemptive U.S. air strike on its nuclear facilities. Interestingly enough, if Trump does in fact take the more forceful route, a new study by Stratfor indicates that any retaliation by the North Korean army on South Korea or U.S. military bases in the region may not be as destructive as originally assessed.

In a scenario where the U.S. Air Force uses military force against North Korea’s nuclear program, Pyongyang’s likeliest course of action in terms of retaliation is a heavy barrage of South Korea. Given the fact that the North boasts several different types of rocket-launch systems—one, the three-hundred-millimeter multiple rocket-launch system, can hit targets anywhere in South Korea—the United States would have to provide advance warning to its allies in Seoul in order for South Korean leadership to prepare for an incoming volley of rocket fire that would claim thousands of civilian lives. According to Stratfor, however, many of the DPRK rocket systems along the DMZ suffer from technical lapses, poorly trained artillery crews, and a concentration of offensive weapons systems that would be highly susceptible to destruction once its location is compromised.

Because the DPRK can’t accurately predict how well its offensive systems would actually perform, Kim Jong-un wouldn’t have much confidence that a bombardment of South Korea’s capital would result in maximum impact. Throughout history, North Korean test launches have failed; Stratfor predicts that “roughly 25 percent of North Korean shells and rockets fail to detonate on target.” The more inaccurate those shells are, the less likely Pyongyang will be able to strike fear into the heart of Seoul.

Even assuming that North Korea’s rocket systems perform the way they are intended, any fire into South Korea would expose Pyongyang’s systems to counter-battery fire. There is little doubt that even a single, coordinated volley of North Korean fire into South Korea would cause immense damage to civilian infrastructure, especially if the South Koreans for some reason are caught by surprise and slow to take defensive measures. The northern suburbs of Seoul would be at risk of saturation, and the South Korean political leadership would wake up the next morning to a worst-case scenario with what could be tens of thousands of civilian deaths. South Korean and U.S. retaliation, though, would be even more punishing than Pyongyang’s initial volley—the very artillery and rocket systems that Pyongyang has spent decades perfecting would be wiped out in short order.

And, as for Pyongyang’s ballistic-missile inventory? Although the range of the North’s medium-range ballistic missiles can travel anywhere in South Korea, every missile fired during an operation is one less missile that Pyongyang can utilize for deterrence purposes—a problem that would be compounded the longer the skirmish goes on.

None of this is to argue for U.S. military activity against the North. For the United States to pull the trigger, Washington would subject its South Korean allies (and possibly Japan, if the war expands) to such incredible physical destruction that the economic leaps Seoul has produced over the past three decades would be severely jeopardized. Alliance relations between the United States and South Korea would be strained to a breaking point, as the United States inevitably attempts to de-escalate tensions, and the South Koreans itch to use ever-greater uses of force to bring eliminate the military capability of its northern neighbor. And it should go without saying that nobody would be able to predict Pyongyang’s behavior in the event of hostilities; with his regime’s stability in jeopardy, there is nothing stopping Kim Jong-un from acting irrationally.

But, as war planners in the Defense Department update their strategies and war games throughout the year, this new assessment will give them some comfort that South Korea would survive from a retaliatory North Korean attack. How long it would take for South Korea to rebuild into the economic powerhouse it is today is a whole other story.

Daniel R. DePetris is fellow at Defense Priorities and a Middle East and foreign policy analyst at Wikistrat, Inc. He can be followed on Twitter @dandepetris.