North and South Korea Are All Talk. Should Washington Get Involved? 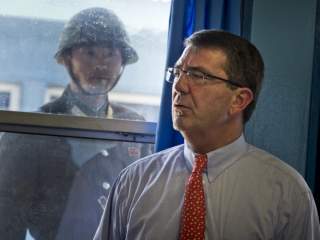 On Thanksgiving the two Koreas had a chat at Panmunjun, the truce village within the Demilitarized Zone. They reached an agreement. To talk some more on Friday.

That’s the way it usually is. When there’s a specific issue that must be resolved, real results sometimes are reached. Last August tensions were rising and the two found a way to dampen the warlike rhetoric. Despite periodic disputes the two governments have kept the Kaesong industrial park going.

But promises of future talks usually fall short. Two years ago the two Koreas agreed to hold top-level discussions: the North pulled out the day before. There have been other, more limited discussions, such as those in February 2014 which led to family reunions. Wide-ranging high-level pow-wows have been rare, however.

Will this time be any different? Before setting off for Panmunjun Kim Ki-Woong, a top official at South Korea’s Ministry of Unification (MOU), said “We will do our best.” The result was at most a modest success by its own terms. The two sides scheduled talks with vice ministers for December at the industrial park in Kaesong, where many South Korean firms employ North Koreans. Observers had been expecting ministerial-level talks in either Seoul or Pyongyang. Cheong Seong-chang of the Sejong Institute criticized both governments’ “lack of will for dialogue and flexibility.”

Even if the discussions actually occur, the agenda remains unclear. The joint statement pointed to “issues that will improve relations between the South and the North.” Fair ‘nuff. But those issues, of which there are many, rarely have been susceptible to settlement via negotiation. Most problems on the peninsula grow out of the North Korean regime’s determined misbehavior.

Topping the list for the South was family reunions, or “divided families,” according to MOU spokesman Jung Joon-hee. Visits are a fine humanitarian gesture for those separated by the war more than six decades ago, but irrelevant to the larger geopolitical conflict. They should be easy: let people travel. But the so-called Democratic People’s Republic of Korea strictly limits the process, hand picking only the most politically reliable.

Jung said at their Thanksgiving meeting the North focused on restarting tours of its Mount Kumgang resort. But these visits were suspended years ago after a North Korean guard shot and killed a tourist who wandered into a forbidden area. Pyongyang never apologized, let alone changed its policy. Thus, the Republic of Korea has no incentive to comply.

Although it went unmentioned at the Thanksgiving meeting, North Korea also desires a resumption of aid, which was suspended (the “May 24 measures,” as they oft have been called) after the sinking of a South Korean warship and bombardment of a South Korean island in 2010. But the DPRK never accepted responsibility for the first and justified the second as defensive. Indeed, as his father’s heir apparent Kim Jong-un was said to have been involved in staging the North’s two acts of war.

There also could be discussion of reunification, but no serious person believes it is possible with the current regime in Pyongyang. Even when I visited the DPRK more than two decades ago my hosts expressed fears of being “swallowed” after watching the German experience. The only way to preserve their “social system,” as they put it, is to preserve a separate North Korean state. If voluntary unification is unlikely, then the only chance is for a violent collapse of the North, in which case there is nothing to discuss.

Conventional arms control would be a logical topic, since the DPRK has positioned its forces near the border to maximize their threatening effect, especially on Seoul, which lies within artillery and Scud missile range. But so far the North has seen little reason to drop its threats. And without a dramatic change in policy, it is hard to imagine the Kim regime living up to any promises it made to do so, which could easily be reversed at any time.

The most important issue, of course, is Pyongyang’s nuclear weapons program. It has been treated as an international question but most affects the South. However, to believe that Kim Jong-un, whose hold on power may not be as secure as he’d like, is prepared to negotiate away the military’s most important and expensive weapon is to believe in the Tooth Fairy or Great Pumpkin. Indeed, even a small nuclear arsenal provides multiple benefits: defense against the U.S.-ROK axis, a tool for extorting neighbors and evidence of international relevance. Without nukes, no one other than its immediate neighbors would pay much attention to the impoverished, starving, isolated dictatorship seeming locked in another era.

Still, talks are better than no talks. As Winston Churchill observed, better to “jaw-jaw” than “war-war.” Perhaps the best policy is to seek to expand North Korean contacts with the West. That should include Washington getting involved, though not simply tossing money at the Kim regime. Rather, a goal should be to expand official contacts and encourage more private encounters.

First, there is no reason to think the Kim monarchy (with Communist characteristics) is likely to disappear. The regime has withstood famine, poverty and the death of two dominant dictators. The youngest Kim has attempted to cement his control by killing some 400 officials, including his uncle, since taking power four years ago. Even if he is ousted, regime elites have a lot a stake in preserving the system if not the specific leader.

Second, historically the regime has been less confrontational when engaged diplomatically. That phenomenon suggests that the North actually desires engagement, and perversely is willing to threaten war to get it. There’s little reason not to respond positively, as long as expectations are kept low. So far, not much has been attained in terms of reducing the DPRK’s threatening behavior. Nevertheless, if the process of talking helps do so, by all means, talk. Especially since there is an off-chance that something more might also be achieved.

Third, change actually is happening within North Korea. With the government’s acquiescence if not support, private markets continue to spread, including one for real estate in cities, including Pyongyang. Moreover, Paul Tjia, a Dutch business consultant who works in North Korea, recently told NK News: “The country is really opening up. They want more investment and trade.” Although the North’s success in attracting foreign interest has been limited, especially after some well-publicized horror stories involving business partners, Chinese money flows have increased.

Most important, the DPRK economy has been growing. Cho Dong-ho, a professor at Ewha Women’s University, recently argued that annual growth was likely closer to five percent than the one percent forecast from the Bank of Korea. Felix Abt, who co-founded a business school in the North, reported: “Poverty has dropped and, equally visible, a middle class has emerged.”

Finally, coercion has failed. As long as China refuses to cut off energy and food, the Kim regime is likely to survive. If the West is forced to live with Pyongyang’s current rulers, it’s worth considering another approach. Abt contended: “If you engage and are present in North Korea, you can understand the philosophy and practices of North Koreans and you can exert a powerful influence.” In his experience, “intense interaction can lead to many changes.” He acknowledged fears of propping up the regime, but believed involvement “also helps transform it.”

Rather than the gift that keeps giving, North Korea is the horror story that keeps playing. But attempting to ignore it isn’t working. America should wish the upcoming inter-Korean talks well. Washington also should follow the South in addressing Pyongyang. Expectations should be low, even nil. But society is changing within the DPRK. When no other policy seems to work, why not give engagement a try?

Doug Bandow is a Senior Fellow at the Cato Institute and a former Special Assistant to President Ronald Reagan. He also is the author of Tripwire: Korea and Foreign Policy in a Changed World and co-author of The Korean Conundrum: America’s Troubled Relations with North and South Korea.