Not News: Saudi Arabia Objects to Being Called a 'Free Rider' 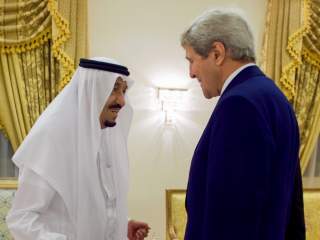 President Obama’s interview with the Atlantic’s Jeffrey Goldberg has generated a slew of commentary, including from some of America’s allies who came in for some rough treatment. Several were particularly stung by Obama’s characterization of them as “free riders.” Not all of America’s allies are content with forever being wards of Uncle Sam. For example, in a new Cato paper, Dartmouth’s Jennifer Lind describes Japan’s shift from buck-passing to burden-sharing. Lind will be visiting Cato later this month to discuss her findings and the implications for U.S. policy in East Asia. I’ll write more about the evolving U.S.-Japan security relationship next week. For now, I’d like to dwell on a very different U.S. ally: Saudi Arabia.

Of all the cries of indignation over Obama’s comments regarding U.S. allies, perhaps none was as unintentionally amusing as the essay by Saudi Arabia’s Prince Turki al-Faisal. Under the title “Mr. Obama, We Are not 'Free Riders'” the prince explains that the Saudis:

“initiated the support—military, political and humanitarian—that is helping the Yemeni people reclaim their country from the murderous militia, the Houthis”;

“are the biggest contributors to the humanitarian relief efforts to help refugees from Syria, Yemen and Iraq”; and

“combat extremist ideology that attempts to hijack our religion, on all levels.”

I suspect that the Yemeni people have a different view of the Saudi bombing campaign. But my personal favorite was this not very subtle dig, directed at President Obama:

“Could it be that you are petulant about the Kingdom's efforts to support the Egyptian people when they rose against the Muslim Brothers' government and you supported it?”

With all due respect to Prince Turki, the suggestion that the Kingdom respects the will of the people throughout the region doesn’t pass the laugh test. Just ask the protesters in Bahrain. Or, indeed, the Egyptians.

As for Turki’s broader claim that Saudi Arabia is not a “free rider,” and is instead a vital U.S. ally, let me borrow from The Bard: he doth protest too much, methinks.

The case for America’s close alliance with Saudi Arabia is flimsy, at best. It might have been justified during the Cold War, when the loss of Saudi Arabia’s oil to the Soviet Union would have been both a major strategic and psychological blow. But U.S. policymakers frequently look past the Kingdom’s many shortcomings.

As Ted Galen Carpenter and Malou Innocent document in their book, Perilous Partners, the relationship always conflicted with the United States’ stated commitment to democracy and human rights. Saudi Arabia is a monarchy, run by a single royal family, in league with the preachers of a puritanical strain of Islam. The Kingdom’s legal code prescribes public execution, denies basic rights to women and sanctions the persecution of religious and ethnic minorities. The Saudis impose severe restrictions on U.S. companies operating in their country, and on the U.S. government’s activities in their country—often, even, placing demands on the United States to change or alter our policies to accommodate them.

But the U.S.-Saudi alliance doesn’t merely offend our values; it also threatens U.S. security. There have been many instances, going back at least to the 1950s, when the United States has become entangled in a regional dispute to assuage Saudi fears or to affirm our commitment to their security. And many of these have ended badly. For example, the current invisible war in Yemen is being fought on behalf of, and in deference to, Saudi Arabia, and it isn’t going well.

Lastly, fifteen of the nineteen 9/11 hijackers were Saudis, and Osama bin Laden justified his attacks against Americans, starting with the African embassy bombings in 1998, in protest of the presence of U.S. military personnel in the Kingdom.

The U.S.-Saudi alliance, Carpenter and Innocent conclude, “played a major role in the region’s radicalization and destabilizing disintegration.” And it “sacrificed America’s commitment to liberalism for the sake of security and undermined both.” The only thing that I’d change in these two comments is the verb tense. The U.S.-Saudi alliance still does all of these things.

Whenever U.S. officials invoke the claim that they are committed to democracy, the rule of law, and the preservation of universal human rights, critics have a ready, two word answer: Saudi Arabia.

Christopher A. Preble is vice president for defense and foreign policy studies at the Cato Institute