A Nuclear North Korea Is Here to Stay 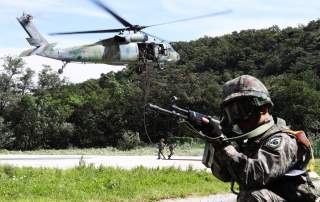 North Korea staged its sixth nuclear test. It was probably a boosted atomic rather than hydrogen bomb, as claimed by Pyongyang, and there’s no evidence that the weapon has been miniaturized to fit on a missile. But the test was the North’s most powerful yet. And it follows steady North Korean progress in missile development.

Despite matching Kim Jong-un bluster for bluster, President Donald Trump is doing no better than his cerebral predecessor in halting Pyongyang’s military developments. President George W. Bush had no more success, first targeting the Democratic People’s Republic of Korea as a member of the infamous “axis of evil,” before flip-flopping to negotiate with the current ruler’s father. At least Bill Clinton achieved a temporary freeze of the DPRK’s plutonium program with the Agreed Framework, which ultimately was undermined by both sides.

Despite its relative poverty and isolation, North Korea has confounded the experts and made surprising advances in both nuclear and missile technology. While all projections are conjecture, Pyongyang may become a medium nuclear power with an effective deterrent against the United States.

That doesn’t mean Kim Jong-un intends to wage war on America. Rather, he hopes to prevent Washington from attacking the DPRK. It’s an important distinction. Kim may be evil but, like his father and grandfather, there is no evidence that he is suicidal. They all appeared to prefer their virgins in this world rather than the next. Indeed, Kim may hope to extend the dynasty: his wife is thought to have given birth to their third child earlier this year.

Unfortunately, negotiated denuclearization is dead. North Korea has invested too much and is too close to creating a nuclear deterrent. For the nationalistic, isolated and fearful—even paranoid—regime to stop now would be unthinkable.

Moreover, Pyongyang faces greater threats today than ever before: the Republic of Korea has continued to race ahead economically, China and Russia are undependable friends if not frenemies, and the United States is far more aggressive internationally. Washington dismantled Serbia, imposed regime change on Afghanistan and Iraq, and took advantage of Libya’s voluntary denuclearization to oust the latter’s dictator. The North demonstrates that even paranoids have enemies.

Despite the president’s insistence that “all options are on the table,” there is no politically viable military option. The United States could attempt to destroy nuclear facilities and missile sites as well as decapitate the highly centralized North Korean regime. However, Washington may not know the location of all the North’s nuclear operations, be equipped to reach those deeply buried, or be able to fully track the movements of Kim and his chief lieutenants. Moreover, any such strike likely would trigger full-scale war.

Even if the U.S. government insisted that it planned no further action, the North would suspect that Washington intended regime change after taking out the DPRK’s best weapons and top leaders. Pyongyang is aware of America’s capabilities and if faced with U.S. military attack, then it would not likely allow Washington to build up its forces and strike at leisure. The Pentagon might hope to scare the North into restraint, but on such a faint hope tens or more likely hundreds of thousands of lives—American, South Korean and North Korean—would depend.

Increased sanctions would hurt North Korea but probably not stop its nuclear and missile programs. Two decades ago famine killed at least a half million people, without changing Pyongyang’s course. Although the DPRK’s elite is enjoying a bit more of the good life, its members are unlikely to revolt if conditions worsen. And China is not yet ready to impose the sort of economic penalties that could cause a North Korean implosion. Using secondary sanctions against Chinese and Russian enterprises risks ending cooperation by those nations with Washington’s efforts.

President Donald Trump should follow his earlier instinct for engagement. To start he should stop threatening war. Doing so reinforces the Kim dynasty’s case for building nukes and missiles. Also, the more the administration talks about the “many military options” possessed by a president few Americans or foreigners trust with the nuclear codes, the more it is likely to unsettle Washington’s allies.

The United States also should talk to Pyongyang. There doesn’t have to be a Trump-Kim summit, jurt an open and regular communication channel for the practical, such as detained Americans, the recovery of the remains of U.S. military personnel, and nuclear weapons. To encourage substantive talks, Washington should freeze joint U.S.-ROK military exercises in return for suspending North Korean missile and nuclear tests. The further its programs develop, the less likely it is that Pyongyang will ever halt them. Moreover, the steady increase in regional tensions and rising panic in Washington makes foolish and reckless confrontation more likely.

The president tweeted his threat to end trade with “any country doing business with North Korea,” no doubt aimed at China. If the administration wants support for tougher measures, it needs to negotiate with Beijing. The People’s Republic of China is not happy with its nominal client state, over which the PRC actually has limited influence. If the DPRK was inclined to listen to its large neighbor, it would have abandoned nuclear weapons and adopted economic reforms years ago.

Moreover, the DPRK’s survival is a security issue for China, which wants neither a failed state nor a united U.S. ally hosting American military forces on its border. Relations with the North also are sensitive politically: both the Chinese Communist Party and People’s Liberation Army have long-standing ties to Pyongyang.

Worse, attempts to threaten and browbeat China’s nationalistic leadership are likely to backfire. President Trump should consider how he would react to similar threats. In this case the PRC likely would find support and aid from Moscow, which has its own reasons for making life more difficult for the United States. In recent years Washington has turned Richard Nixon’s famous outreach to China on its head, pushing America’s two Cold War antagonists back together.

In return for Chinese support, Washington should lower the peninsula’s rhetorical temperature, offer to talk with the North, and develop a comprehensive benefit package in return for denuclearization. The United States also should accommodate the PRC’s interests: For instance, offer to help care for refugees from a North Korean collapse, give Beijing a free hand intervening in the DPRK, and promise to remove U.S. forces in the event of reunification. Then press China to act.

In case the North forges ahead, U.S. officials should consider how to deal with a nuclear North Korea. Bilateral communication would become even more necessary, like with the Soviet Union during the Cold War. Improving missile defense would take on greater urgency.

Most important, Washington should reconsider outdated policies which endanger the United States. America should phase out its security treaty with and military deployment in South Korea. The ROK is capable of its own conventional defense; without the Cold War the peninsula looms much less important for U.S. security. If the North develops the ability to destroy American cities, Washington’s participation in another Korean War becomes more dangerous than any conceivable geopolitical stakes for the United States. The moment Pyongyang found itself to be losing it could target America’s homeland.

Even Washington’s long-standing nuclear umbrella would become a problem. Although nonproliferation remains a worthy objective, in Northeast Asia it has had an effect akin to that of domestic gun control: ensuring that only the criminals have guns. China, Russia and North Korea now possess the world’s most fearsome weapons, while South Korea, Japan and others (Taiwan and Australia) do not. Instead, they rely on America. But if nuclear war arrived, would this or any other president sacrifice U.S. cities for a cause which did not pose an existential threat to America? Hopefully not.

It is time to debate the unthinkable: acquiesce in, or even encourage, creation of countervailing South Korean and Japanese nuclear deterrents. Public opinion appears far more favorable to such a possibility in South Korea, but if the latter acted, Tokyo would be forced to consider a similar course. If Beijing saw such action as likely, it would have greater incentive to act against the North to preclude the threatened spread of nukes. More nuclear weapons would not be a good answer, but long ago Korea became the world of only second best solutions.

The latest nuclear test provided no surprises. But it dramatically reminds us of the DPRK’s growing nuclear capabilities. There is no easy way to disarm North Korea. Washington must rethink assumptions and policies which have manifestly failed.