Obama Is Ignoring the Law in Libya, And Congress Doesn't Care 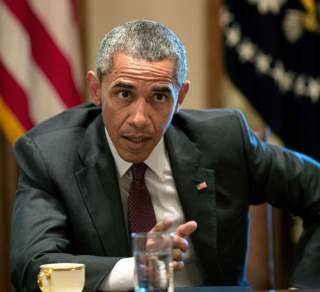 It is now plainly evident, incontrovertibly so, that the executive and legislative branches of the U.S. government consider what was once known as “federal law” to now be merely “federal suggestions.” Recent events confirm this to be true.

On August 1, the United States military launched airstrikes in Sirte, Libya against ISIS. According to Pentagon press secretary Peter Cook, the action was ordered by the president and came “at the request of Libya's Government of National Accord.” When asked what legal justification the President based the strikes on, Cook claimed it was the “2001 Authorization for the Use of Military Force [AUMF] similar to our previous airstrikes in Libya.”

Yet that authorization, also known as Public Law 107-40, explicitly limits the president to use force only against “those nations, organizations, or persons he determines planned, authorized, committed, or aided the terrorist attacks that occurred on September 11, 2001.” Recognizing that ISIS didn’t exist in any form in 2001, U.S. Army Capt. Nathan Smith recently filed a lawsuit against the president for violating this law. Perhaps he should also have named the Senate and House of Representatives as accomplices.

Congress routinely surrenders its constitutional obligations to the White House and blithely ignores its own laws. The Constitution, of course, ascribes to Congress the sole authority to declare wars. But more to the point, the 1973 War Powers Resolution restrains the administration’s ability to independently wage war.

The law is explicit and irrefutable in its provisions. It requires that the “President in every possible instance shall consult with Congress before introducing United States Armed Forces into hostilities.” Not “some” instances and not just for major combat operations. It specified “in every possible instance,” which includes sending U.S. military personnel to bomb targets in a foreign country.

In his lawsuit, Smith factually notes that the president “did not get Congress's approval for his war against ISIS.” Administration lawyers predictably claimed the suit should be thrown out.

“The President has determined that he has the authority to take military action against ISIL,” the motion to dismiss claimed. And in any case, the brief continued, the president’s action actually did have Congressional approval, claiming that “Congress has ratified that determination by appropriating billions of dollars in support of the military operation.” Apparently they did not read the entire War Powers Resolution, because it expressly forbids such rationalization.

“Authority to introduce United States Armed Forces into hostilities  . . .  shall not be inferred” from any legislative action “including any provision contained in any appropriation Act, unless such provision specifically authorizes the introduction of United States Armed Forces into hostilities.” The 2001 AUMF does not authorize the President to engage the Islamic State anywhere and the 1973 Resolution specifically states the appropriation of funds does not constitute approval for the use of force.

The net result is that the president ignores the law, and Congress refuses to hold him accountable to it. The lethargy of inaction has effectively amended the Constitution so that Congressional approval is no longer required for war and peace decisions. It now resides exclusively in the hands of a single individual: the president. What does this portend for the future?

The Founders wisely designed a system of government which called for a separation of powers for a reason. Congress is a powerful and critical check on the executive, which has steadily consolidated more and more power in recent history. This should alarm all who cherish the Constitution.

Regardless of who occupies the White House, are the American people prepared to confer the power over war and peace to any one person, freeing them from any restraint or accountability to act as they personally see fit? Our first president certainly didn’t think so.

In his farewell address in 1796, George Washington warned against the tendency to subtly expand power in the presidency. He cautioned:

The spirit of encroachment tends to consolidate the powers of all the departments in one, and thus to create, whatever the form of government, a real despotism… If, in the opinion of the people, the distribution or modification of the constitutional powers be in any particular wrong, let it be corrected by an amendment in the way which the Constitution designates. But let there be no change by usurpation; for though this, in one instance, may be the instrument of good, it is the customary weapon by which free governments are destroyed.

For the security of our nation and the preservation of our democratic government, we must demand that Congress fulfill its obligations and either approve or disapprove the use of force in the name of the United States. If the case for military force is strong, let the administration plainly put forth its justification. But the very least Congress could do for the American public is conduct vigorous and open debate.

For the past several decades, U.S. administrations have been unwilling to seek congressional approval for the use of force. The House and the Senate have been unwilling to challenge the president. In 2013, however, popular opinion clearly constrained the White House from going to war with Syria. Voters must again flex their democratic muscle. Whether it be by voting only for those candidates who credibly promise to fulfill their constitutional obligations or again communicating its displeasure to Washington, the people have apparently become the last line of defense providing checks and balances on the government.

It’s time our elected officials stop placing burdens on the backs of our citizens and started doing the job for which they were elected.