Obama Must Ignore the Call to Increase Troops in Afghanistan 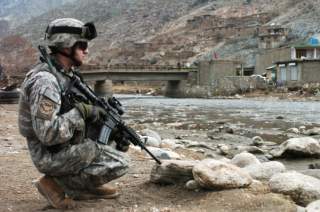 Earlier this month, a group of well-known retired generals and former diplomats sent the president an open letter encouraging him to extend U.S. military operations—yet again—in Afghanistan. The document exploits fear, distorts evidence and employs flawed logic in an attempt to influence the White House and the American public. If their recommendations are implemented, perpetual failure in Afghanistan would become official policy.

The letter opens with one of the most successful tactics used by advocates of perpetual military action for the past fifteen years: stoking the fires of fear over 9/11. The authors claim that “Afghanistan is the place where Al Qaeda and affiliates first planned the 9/11 attacks and a place where they continue to operate—and is thus important in the broader effort to defeat the global extremist movement today.” It is time—once and for all—to expose the claim that somehow the physical terrain of Afghanistan was the key factor that assured the terrorists success on 9/11, and that military power can defeat a worldwide extremist threat.

Where bin Laden and his Al Qaeda operatives sat when they concocted the plot is wholly irrelevant. Conversations can and will continue to take place anywhere in the world. What made the 2001 attacks successful was the planning and training that took place primarily in Germany and the United States.

The letter then illogically justifies its argument that the president should maintain current troop levels by crediting him with having already succeeded in preventing “the reemergence of a terrorist sanctuary in Afghanistan.” Yet the number of terror organizations and terror threats to America has risen considerably over the past fifteen years. The letter also leaves out crucial facts.

The authors warned that, “the problems of the Middle East do not remain contained within the Middle East” and that if the president doesn’t keep—or make a “modest increase” in the number of military forces in Afghanistan—the Al Qaeda and ISIS presence there “could be expanded” and create a “security vacuum.”

What they fail to acknowledge is that the military strategies these men formed and executed are responsible for keeping the Middle East aflame. The threat of the violence spreading to the American homeland has not abated.

It is important to understand that some of these authors were previously successful in convincing U.S. presidents to:

1) Surge 182,000 U.S. and coalition troops to fight terrorists in Iraq, succeeding only in temporarily reducing violence while creating the opportunity for the government in Baghdad to suppress Sunni minorities. This lay the groundwork for the emergence of ISIS.

2) Surge 150,000 NATO and U.S. troops to Afghanistan, which never quelled the Taliban or Al Qaeda threats. As soon as the military withdrew, the Taliban, Al Qaeda, ISIS and new terrorist threats exploded there; more territory is now in the hands of terrorists than at any time since 2001. Unless these men are prepared to claim that the White House must permanently garrison large numbers of U.S. troops throughout the Middle East, their recommendations don’t make sense.

Instead of recognizing that a strategy predicated on the application of conventional military forces has backfired for the better part of two decades, these men advocate for a perpetual reliance on military power.

Americans are culturally wired to seek excellence and aren’t satisfied merely with succeeding, but in becoming champions. That is why professional sports teams that don’t win even a year or two after earning a championship fire their coaches players. We simply do not like to lose and have no patience for leaders that don’t produce.

This open letter to the president on Afghanistan is like a group of NFL coaches who have led teams to last place finishes ten straight years while trying to convince an owner to take their guidance on how to run his team. Their advice would be immediately rejected.

At some point, Americans have to decide if they want an Afghan policy based on preferences and aspirations, or one that is formed after a sober, intelligent analysis of the political, cultural and geographical conditions. NFL owners justly listen to coaches with winning track records and fire those who lose. Let us hope the president will likewise reject the advice of those with losing records and instead seek new “coaches” with fresh ideas.