Obama Must Lift the Fog of Drone War 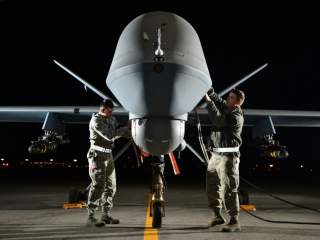 After the conclusion of the two-day Nuclear Security Summit in Washington last week, President Barack Obama did what he usually does once a high-profile meeting with dozens of world leaders ends: he stepped up to the podium and took questions from reporters.

As should have been expected, many of the questions thrown his way were about nuclear security matters. Did he think Chinese and Russian nuclear modernization is undermining global nonproliferation efforts? How serious is the link between nuclear materials and international terrorist networks? And how much of a priority do other nations around the world put on safeguarding loose nuclear material?

But the most interesting question didn’t have anything to do with nuclear weapons. Rather, the subject was about drones and President Obama’s consistent use of targeted killing in his counterterrorism policy over the past seven years. Asked by the Washington Post’s David Nakamura how he could be certain that all of the people that have been killed in drone strikes were in fact imminent threats to the United States, President Obama tacitly admitted that he couldn’t provide that reassurance. In a moment of candor, Obama admitted in public what international human-rights organizations, counterterrorism analysts, former intelligence officials and think tanks in Washington have long reported: civilians have indeed been killed in U.S. drone attacks.

President Obama continued: “[The legal framework governing the use of drone strikes] wasn’t as precise as it should have been, and there’s no doubt civilians were killed that shouldn’t have been. We have to take responsibility where we’re not acting appropriately, or just made mistakes.”

Depending on which organization is tracking the casualties, estimates on the number of civilians who have perished as a result of drone strikes range from 370–445 (according to the New America Foundation’s count of strikes in Pakistan, Yemen and Somalia) to the much larger 514–1,127 (from the Bureau of Investigative Journalism). Because these are just ballpark figures, however, the international community doesn’t know precisely how many civilians have been killed, what the ratio of civilian to combatant deaths is and where each of these strikes took place. Until senior administration officials were forced to release some critical information by court order, the U.S. intelligence community and the White House operated on the ridiculous premise that there was no drone program to begin with. That position became increasingly more ridiculous after each news report of another attack by unmanned aircraft—one that President Obama, to his credit, has taken personal interest in changing.

And yet despite the fact that targeted killing has been an instrumental tenet of America’s counterterrorism policy for two consecutive administrations, the American people are only allowed to access the most basic information about these operations. For far too long, the U.S. government has modified the drone program without much consideration for what the public is entitled to know under a democratic system of governance.

At one point in time, CIA director John Brennan made the outstanding claim that there wasn’t a single civilian casualty during the previous year of targeted killings. Exhaustive reporting about the procedures that the Obama administration used to distinguish between terrorists approved for the “kill list” and those who were not only added more ammunition to activists campaigning for greater transparency.

The White House has responded to the calls for more transparency, but has done so to the minimum extent possible. The infamous 2013 speech at National Defense University, where President Obama outlined the legal criteria for the program, was the beginning of an effort to level with the American people. An unclassified presidential directive was released on the same day, providing the public with more information as to the U.S. government’s legal framework, its “near-certainty” standard that civilians were not present in the target area and the amount of oversight that members of Congress were afforded after each strike occurred.

The Obama White House is prone to calling itself the most transparent in U.S. history. On the drone issue, however, that description is more talking point than truth. If President Obama wants to seriously be considered as a transparent president in the history books, he should go beyond releasing the raw number of civilians killed in drone attacks since 2009, by enacting reforms that are bolder and will last longer than a single administration.

There are multiple reforms to the process that President Obama can either enact on his own or advocate for in the halls of Congress. He can and should declassify the full Presidential Policy Directive that establishes the rules and procedures for the targeted killing program so the American people can judge the standards for themselves. The White House should push for a statute that requires any future administration to annually disclose how many combatants outside declared warzones have been killed in drone strikes during the previous year, how many civilians were killed, where the operations took place (broadly speaking), how much the drone program costs to the U.S. taxpayer, which terrorist organizations are listed as fair game, and a public assessment from the intelligence community of the impact of drones on the capability of those terrorist groups to hold territory, plan attacks, recruit and fundraise.

All these reforms could be passed without compromising sources and methods, or tipping off America’s terrorist adversaries. Just as importantly, opening the program to more scrutiny from Congress and the American people will set an international standard for countries in the future who are beginning to deploy their own drones on the battlefield.

If the current president cannot or will not do it, the next one should.