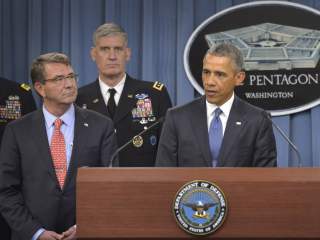 If there is one overarching foreign policy objective that President Barack Obama would like to accomplish before he departs the Oval Office in a year, it is the absolute and unquestioned defeat of the Islamic State—a terrorist quasi-state that has given his administration so much heartburn over the past sixteen months.  From the “J.V. Team” comment in January 2014 to the interview in which President Obama boldly proclaimed that ISIL was “contained” in Iraq and Syria (a day later, ISIL conducted the worst terrorist attack that the city of Paris has ever seen in the modern era), the terrorist organization has had a habit of making the White House's statements to the press sound detached from what is actually going on. In a war, getting the messaging and public relations right can be just as important as the strategy for winning the conflict in the first place. Pretend like everything is going well, and an administration runs the risk of losing its credibility with the American people and allies alike.

President George W. Bush learned this the hard way during the invasion and occupation of Iraq, where every single massive suicide bombing on a Shia target or a high monthly U.S. death toll was explained away at White House and Defense Department podiums as the reality of a very long and protracted insurgency. Defense Secretary Ashton Carter hasn't been as cavalier as one of his predecessors in describing the hardships, costs, and setbacks involved in a war (remember the 2003 “stuff happens” comment from Donald Rumsfeld?), but press conferences and daily readouts given to reporters have taken on the tone of business as usual.

One of the conventional complaints from people in Washington is that President Obama just doesn't like schmoozing with members of Congress and selling his policy to the American people very much. One can have sincere doubts that this is actually true; anyone who has paid attention over the past year will see how engaged and passionate President Obama can be on an issue that is of immense importance to his legacy and to the security of the country, like the nuclear agreement with Iran. But these people nonetheless have a point—in the war against ISIL, the White House has not been as synchronized and strategic with its messaging as it should be. As the President himself acknowledged in an interview with NPR's Steve Inskeep, “I think that there is a legitimate criticism of what I've been doing and our administration has been doing in the sense that we haven't. . . on a regular basis. . . described all the work that we've been doing for more than a year now to defeat ISIL.”

If 2015 was the year of trying to rationalize why the Iraqi army collapsed in a pile of dust in Mosul or why its strategy of resolving the Syrian civil war through a negotiated transition is the correct approach, 2016 will be the year of better explaining to the American people why the administration's anti-ISIL strategy is working and why the present course of depending on U.S. airstrikes, the advising of local forces and U.S. special operations raids is more prudent than what Republican presidential candidates are supporting.

According to the Washington Post, Americans are about to see a lot more of their president and his cabinet talking openly about the campaign's progress. “You’re going to see more of all of it [outreach to the American public] in the new year,” a senior administration official said. “You’ll see the president continue to be the chief messenger when it comes to this. . . You’ll also see Carter, Kerry, the military generals, Lew, Szubin — the whole cast of characters really, to speak to this in a very concerted way in order to ensure” that the American people are educated to the fullest extent possible as to what the strategy is all about.

Will more press conferences, background briefings, press releases, fact sheets, and interviews on television and print convince the American people that the United States is in fact on the road to degrading and defeating the Islamic State? Or will the coordinated effort smell of desperation, a deliberate attempt to orchestrate positive media coverage on a military campaign that is not having its intended effect?

We won't know the answer to these questions until we are deep into the new year. But President Obama, with one year left in office, is right to try. During wartime, an informed and engaged public is the best defense for spotting B.S. and separating objective analysis from a manufactured public relations exercise. During the Vietnam War, the American people and the U.S. Congress were largely kept in the dark at the same time tens of thousands of additional U.S. troops were being deployed into South Vietnam as combat units. During the Iraq War, the American public was led to believe that the Iraqi insurgency shooting up U.S. patrols and bombing U.S. convoys were a bunch of dead enders or remnants of the Saddam Hussein regime. Misinforming or misleading the public as to the scope and nature of those conflicts not only kept Americans out of the loop, but also hurt the war effort by contributing to a situation whereby new strategies and approaches were considered to radical.

Daniel R. DePetris is an analyst at Wikistrat, Inc., a geostrategic consulting firm, and a freelance researcher. He has also written for CNN.com, Small Wars Journaland the Diplomat.