Is Obama a Realist? He Is When Hillary's Not Around 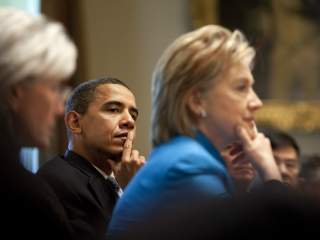 Recently, in The National Interest, Paul Pillar again took up the debate over whether President Barack Obama takes a realist approach foreign affairs. Pillar makes some excellent points and fleshes out the argument he originally made in 2015. Among the evidence compiled from a reading of both essays: a rational assessment of the conflicts in Syria and elsewhere, an honest evaluation of America’s inability to solve inherently local problems and a narrowing of the notion of what constitutes a vital interest. Pillar builds on a now-substantial literature, at least in the policy blogosphere debating the question of the president’s realism. No less a realist than Professor Stephen Walt suggested in 2014 that Obama might be more suited to the label then even Dr. Walt himself. Paul Saunders argued “no” in these pages around the same time, attributing the president’s seeming pragmatism to isolated incidents rather than an overall strategy. Obama has said something similar, eschewing either realist or liberal (in the IR sense, of course) labels and claiming a pragmatic approach to every new situation, and perhaps we ought to take him at his word.

Whichever side one takes, a point being missed is that this debate couldn’t have been happened during the first Obama term. Noted humanitarian interventionists like Hillary Clinton and Samantha Power took up high posts in the administration. Even the most vocal of the antiwar left had a rethink of their positions and softened their opposition to the Afghan intervention, now recast as a struggle for women’s rights. In the coming years, an infamous “red line” would be drawn across the Syrian warzone and a disastrous foray into Libya turned out a newly-minted ally and ushered in radical-flavored chaos. The administration gave tacit support to Arab popular movements over long-time allies even as the promise of a liberal democratic Arab Spring gave way to an Islamist winter.

It is only when free of Ms. Clinton’s direct influence that Obama’s realism has begun to show. In the past months, evidence of a realist approach in the president’s policy has been coming in from around the globe. In the Middle East, an outreach to Iran has resulted in a nuclear accord and constructive engagement on other issues. This could signal the return of support for a balance of powers between the Shia and Sunni states. In the Far East, the “pivot to Asia” has at its core a trade pact, pulling the ASEAN nations closer to the U.S. orbit with the aim of containing China’s rise. Obama has been enthusiastic about pressing the American diplomatic advantage even though many regional leaders he hosted at a recent California summit are hardly angels themselves. In Latin America, the Economist noted earlier this month that renewing relations with Cuba and toning down the war on drugs at home has had the effect of winning back Latin American leaders who cozied up to China when Beijing was paying premium prices for their raw materials. A new approach, the Economist claims, could turn the region into a peaceful, prosperous “American front yard.”

All of this progress could be scuttled, even if the Democrats hold the White House. There’s a reason that neoconservatives are more comfortable with Clinton than anyone in their (adopted) home party. We may not be able to agree on whether or not Obama is a realist, but it’s easier to tell who isn’t.

Steve Hoodjer is a U.S. Army veteran and documentary film producer. He is pursuing a Master of Public Policy degree at the University of Northern Iowa.