Obama Is Siding with Saudi Arabia over 9/11 Victims 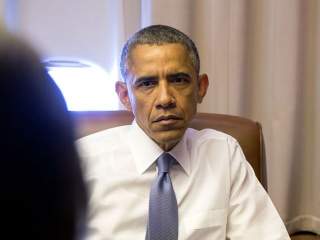 The seven-decade-old bilateral relationship between the United States and Saudi Arabia is in rough waters. On seemingly every major issue of importance in the Middle East, Washington and Riyadh are either locking horns on strategy or arguing with one another over how a particular goal should be met.

More often than not, the Obama administration and the al-Saud ruling family share the very same objectives in the region. Both, for instance, want Bashar al-Assad’s rule to end in Syria; both wish that Yemen’s internationally recognized government will eventually have the strength to reinstate itself in the capital; and U.S. and Saudi leaders are increasingly of one mind on the barbarity that the Islamic State represents.

And yet, the United States and Saudi Arabia have different plans for meeting the same objectives. While President Obama and King Salman would be equally ecstatic if Assad put his country first and left Syria tomorrow, Salman would rather see him six feet underground instead of in a jail cell at the Hague.

President Obama’s trip to Saudi Arabia this week was supposed to heal some of those wounds and bring both allies back on the same page.

Legislation that would provide U.S. citizens with recourse to sue Saudi Arabia for possible culpability in the September 11 attacks, however, has made that already tough job even more difficult.

The bill, called the Justice Against Sponsors of Terrorism Act (JASTA), has been introduced on three separate occasions over the past four years and is about as bipartisan a piece of legislation that Americans have seen coming out of Washington in years. The Senate passed the bill in December 2014 by unanimous consent, but there wasn’t enough time on the calendar for the House to take up the legislation and send it to President Obama’s desk. Sens. Charles Schumer and John Cornyn, co-sponsors of the measure, are hoping that the third time is the charm; the bill sailed through the Judiciary Committee this January and has been awaiting floor time ever since.

JASTA attempts to right a wrong for the families of 9/11 victims who have attempting to bring Saudi Arabia to court for possible financial and logistical support to several of the 9/11 hijackers. It is also an effort to grant any future American who is either injured or who has lost a loved one to terrorism on U.S. soil the opportunity to pursue monetary damages against the designated terrorist group that carried out that attack. Ever since 2005, the 9/11 families have tried to sue Saudi Arabia, particularly for donating to charities that were sympathetic to Al Qaeda’s cause. And in each case, judges have dismissed those lawsuits on the grounds that Saudi Arabia enjoys sovereign immunity under U.S. law.

As it stands today, bringing suit against a foreign government official or a foreign government for the death or injury of an American is an exceptionally high bar to meet in a courtroom. The plaintiff has to demonstrate that the foreign government was directly connected to the offense and that the offense occurred inside the United States. (Providing funds to extremist charities overseas, for instance, wouldn’t be considered plausible justification under the law as it’s currently written.) In addition, the plaintiff must prove that the foreign official that caused death or injury was acting within the official duties of his office The Schumer-Cornyn bill would lower those standards and make it far easier for American victims of terrorism (committed on American soil) to take a foreign nation to court.

The legal dimension is quite complicated but the politics are not. (I’m not a lawyer, so if you want a clearer explanation around the legalese, read Professor Steve Vladeck’s analysis.) When Ted Cruz, Chuck Schumer, Dick Durbin, Chuck Grassley, the liberal Mike Lupica, the arch-conservative Andrew McCarthy, Hillary Clinton, Bernie Sanders and Donald Trump all agree that the Saudi Government should be held financially liable if they happened to have some association with the 9/11 attacks, it’s a safe bet that the Schumer-Cornyn bill would have a very good shot at becoming law if Senate Majority Leader Mitch McConnell ever scheduled the bill for a floor vote.

The Obama administration seems to be the only entity in town that opposes the passage of JASTA (he is getting an assist from House Speaker Paul Ryan and Sen. Lindsey Graham). White House Press Secretary Josh Earnest remarked on April 18, “It’s difficult to imagine a scenario in which the president would sign the bill as it's currently drafted.” The White House is understandably worried about U.S. citizens or the U.S. government being charged overseas for acts of violence in retaliation. And the Saudis are threatening to sell three-quarters of a trillion dollars of U.S. assets in order to protect themselves from possible litigation down the road. All of this pressure is mounting on President Obama, who has dispatched his national-security team to lobby against a measure that would provide the citizens he represents with the power to gain some small amount of closure.

President Obama is in an unenviable position. He is caught in one of those political traps where any decision he makes will make somebody mad and have an adverse impact on his legacy. Side with the 9/11 families, and Washington’s rupture with Saudi Arabia is likely to sink into an even deeper hole. Side with the Saudis, and President Obama is essentially telling three thousand families who lost a loved one on September 11 to suck it up and stop pursuing financial damages.

As he continues his deliberations on whether or not the White House will become a partner rather than an obstructer of a bipartisan bill, President Obama should keep this fact in the back of his mind: as the commander-in-chief of 324 million Americans, he has a duty and a responsibility to ensure that Americans are afforded justice and that anyone even remotely connected to the single worst terrorist attack in America’s history is held accountable. When you have the opportunity to fix a law that has deprived families from receiving a fair judicial process related to the single greatest slaughter on American soil since Pearl Harbor, you would be derelict not to take that opportunity.

Doubly so if you happen to be the president of the United States.