One Belt, One Road: Why Trump Should Get Behind China's Economic Growth Plan 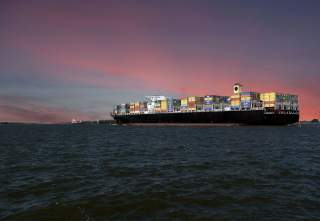 Like Hong Kong, Macau enjoys special status within China. The Special Administrative Region is effectively governed by Beijing, but retains liberal freedoms reflecting its Portuguese heritage. Much smaller than neighboring Hong Kong, Macau relies on gaming rather than finance as its economic foundation.

The Special Administrative Region took a major economic hit in 2015 in the midst of the Xi government’s crackdown on corruption and ostentatious living. The flow of Chinese “whales” to Macau’s casinos slowed and the economy retrenched. Macau has since recovered, but its leaders hope to diversify for the future. To promote that end the territory hosted the international conference on the Belt and Road Initiative (BRI) and Macau’s development.

The initiative, also known as One Belt, One Road, was proposed by China’s President Xi Jinping four years ago. A priority for Beijing, it necessarily is a priority for anyone under Beijing’s sway. And while Western states have been understandably skeptical of the program, Xi’s plans have been boosted by the Trump administration’s retreat from the international marketplace.

The U.S. government’s withdrawal from the Trans-Pacific Partnership, which it helped birth, and its talk about trashing the free trade agreement with South Korea, have encouraged America’s economic partners to look elsewhere to expand commerce. Beijing is moving to fill the void, advancing other free trade agreements along with BRI. Asian analysts and officials remain amazed at the Trump administration’s pursuit of economic isolation. No one else intends to follow the United States toward some variant of protectionist autarchy.

In fact, participants at the Macau conference wanted the United States to be involved, which is one of the reasons for why I was invited to attend the conference. In May, President Xi spoke of creating “a big family of harmonious coexistence.” Whatever his ultimate ambitions, local officials, with an eye to expanding economic opportunities, believe the more the merrier.

BRI harkens back to the fabled “Silk Road” of ancient times. Imperial China once was a dominant presence in Asia, before choosing isolation. The weakened state lost territory to Western “concessions” and Japanese conquest. Last century’s communist revolution created a new, even more malign form of isolation, until Deng Xiaoping took control and opened the People’s Republic of China to the world.

Since then the People’s Republic of China (PRC) has revived the best of its ancient commercial heritage. BRI offers an extension of Beijing’s already expansive commercial network, with the potential of placing China even more firmly at the center of the global economy. Weirdly, “Belt” refers to land transport while “Road” represents sea lanes. Nevertheless, the basic idea is to enhance old and create new infrastructure to promote commerce among Asia, the Middle East, Africa and Europe.

Nearly seventy countries have signed agreements with the PRC to participate. At its most expansive, the program envisions $4 trillion in spending and could touch two-thirds of the world’s people responsible for a third of the world’s GDP. However, so far Western countries and companies have been hesitant to join China’s BRI parade.

The initiative has multiple objectives. It is a geopolitical attempt to extend Beijing’s influence. It could enhance China’s international economic stature. BRI projects also could strengthen the PRC’s energy supply chain. The program might boost an economy that has been losing altitude. It offers projects for underperforming, even underwater state enterprises and employment for workers who have few obvious alternatives. Similarly, the initiative could help soak up some of the PRC’s infamous industrial surplus, particularly in steel and cement. BRI could increase trade opportunities as China faces protectionist pressures from America and Europe. Some Chinese even claim a hint of enlightened self-interest, comparing BRI to the Marshall Plan, only at thirty times the size.

To the extent that such a program succeeds in expanding global commerce, it will be good for China and the latter’s trading partners, as well as other nations which participate in BRI projects. The initiative also offers opportunities for Macau, which is why the latter hosted the forum. Having historically relied on gambling and tourism and with its trade overwhelmingly linked to China and Hong Kong, Macau is looking for additional economic options. The Special Administrative Region also has some unique advantages: a special relationship with the half dozen Portuguese-speaking nations, an entree into Europe from its Portugal connection, a specialized if small financial industry, and close ties with China and Hong Kong.

Although BRI’s ambitions are grand, so far its successes have been modest. And holding back from participating are major economic and geopolitical players who could help make the program a global reality. For instance, European countries have responded with varying levels of enthusiasm to Beijing’s plans; most did not send heads of state or government to last month’s Beijing forum.

Russia also has exercised caution. Although hostility toward Washington has helped draw Russia and China together, the latter two compete for political influence and business deals in Central Asia. Moreover, Moscow, under Western sanctions, may lack the capital necessary for full participation in BRI.

India has been ostentatiously hostile. New Delhi was angry over China’s planned $55 billion investment program in Pakistan, which would include disputed territory in Kashmir. The Hindi newspaper The Pioneer, tied to the ruling BJP, warned that the program’s goal “is to establish Chinese mastery over oceans and connecting routes across Asia and between Asia and Europe.”

The United States has given off mixed signals. Last year the Obama administration offered a tepid endorsement. Former Deputy Secretary of State Tony Blinken said the initiative was “consistent” with U.S. goals and could be “complementary” with U.S. efforts. However, the Trump administration’s Dan Coats, Director of National Intelligence, warned of the Chinese desire to “expand their strategic influence and economic role across Asia.” The administration sent a lower-ranking delegation to last month’s Beijing forum.

Washington’s reluctance in part reflects concern that the PRC is using its economic strength for political purposes. The Obama administration similarly refused to join the Asian Infrastructure Investment Bank. To this issue now must be added President Trump’s protectionist tendencies, even though BRI theoretically offers commercial opportunities for America firms. However, realization of those possibilities depends greatly on the rules and terms governing projects at a time when United States firms feel increasingly unwelcome in China.

If Xi’s program is going to attract greater participation from these important international players, BRI must focus on economics, not politics, and promote projects which make economic sense for lenders/builders as well as borrowers/recipients. BRI also needs to take into account the often complex and fragile politics within participating states.

There are many potential pitfalls which need to be avoided. One is that the program may have too many objectives: China and fellow participants need to set priorities. Such a program, with high geopolitical goals, risks encouraging projects of little economic value. The pressure to find projects may grow particularly acute in the least developed BRI nations, many of which remain in poverty because of their own counterproductive policies. Indeed, nearly half of countries eligible to participate have been judged “high risk” by Oxford Economics, while half of those which have accepted projects have credit ratings below investment grade. To the extent that projects are treated more as assistance than commerce, BRI risks repeating the unhappy experience of manifold failed aid programs over the years.

Many of the governments involved are incompetent, unpopular and corrupt, undermining any program. Moreover, economic projects often have political overtones. China has found itself subject to protests and even treated as an election issue in such nations as Myanmar, Sri Lanka and Zambia. As noted earlier, Beijing’s Pakistan investment has drawn it into the Kashmir imbroglio. Russia may not react well if through BRI the PRC further attracts countries once part of the Soviet Union.

The program’s development might suffer from China’s own economic problems, such as banks with dangerously high-debt burdens and the temptation for companies and provinces to relabel most any economic development as BRI-related in order to win subsidies and other official support. Beijing’s increasing geopolitical aggressiveness may deter some states from participating out of fear of exploitation. Environmental issues are certain to arise, as well as risks of increased terrorism as potential targets, both people and projects, spread to more at risk countries. Finally, implementation issues are monumental: to manage so many projects in so many nations poses unprecedented challenges.

What of the future? There’s reason for skepticism, but problems can be overcome. However, doing so will require restraint and responsibility from Beijing’s nationalistic and aggressive authorities. One step would be serious economic reform at home, especially of state enterprises and banks, as well as ending what appears to be a systematic campaign to harass and disadvantage Western concerns. China also should join developed nations by paying off debts to the World Bank and IMF, which are artifacts of an earlier era.

The PRC should use BRI to empower poor nations. Beijing could open its capital markets, ease import barriers and enable more foreigners to work and do business in China. Also, Beijing should directly address the concerns of its greatest critics, emphasizing BRI’s economic purpose, focusing on private investment and participation rather than government enterprises, and structure deals to maximize international participation. The PRC could offer formal discussions over issues of concern, such as technical standards for projects.

Finally, China should seize the opportunity to share global economic leadership. Beijing should point out to the Trump administration that BRI offers the potential for the sort of “deals” that President Trump appears to value and look for ways to use the program as a means to expand trade with other nations in the wake of the Trump administration’s economic retreat.

In pushing BRI, President Xi spoke of the “great rejuvenation of the Chinese nation.” That already has occurred. China accounts for half of Asia’s economic activity. The PRC is the globe’s largest merchandise trader. In recent years it has been the largest contributor to world economic growth. Total Chinese foreign direct investment is estimated at a trillion dollars.

But challenges remain to Beijing’s program, most seriously the suspicion that BRI is a political maneuver intended for the PRC’s global advantage rather than the economic benefit of others. China should address its critics.

Last month President Xi called on conference attendees to “build an open platform of cooperation and uphold and grow an open economy.” Properly structured, BRI could advance that end. Then Beijing would be well positioned to challenge the United States and Europe, as well as India and Russia, to join China’s efforts. If they took up such a challenge, much could be accomplished for the benefit of all.