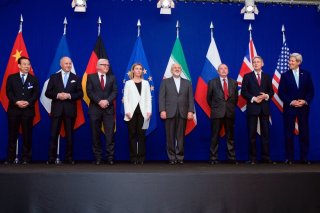 Rarely does a think-tank report produce much buzz with people outside Washington. Most of them are usually skimmed and thrown in the trash once the executive summary is read. But allegations published by the Institute for Science and International - one of the most respected nuclear watchdogs in the entire country - that the United States and its P5+1 allies permitted certain exemptions in the nuclear deal in order to save Iran from embarrassment has lit a fire under the pants of JCPOA opponents.  This disclosure comes several weeks after the White House was forced to admit that the $400 million settlement to Iran was sent on the same day as Tehran released four imprisoned Americans.

The report is littered with jargon and terminology that only an arms control expert or nuclear physicist can understand, but the bottom line is clear: the P5+1 allowed the Iranian Government to keep more low enriched uranium in its facilities than the 300 kg the deal stipulates; Iranian scientists were granted an exemption to operate more hot cells that are used for medical isotope production; and Iran was permitted to keep more heavy water in its custody than the 130 tons that the JCPOA mandates.

The Joint Commission approved all of these decisions, but did so in an "overly secret" fashion that "amounts to the generation of additional secret or confidential arrangements directly linked to the JCPOA that do not have adequate oversight and scrutiny."  David Albright and Andrea Stricker sum up their report with a worry that congressional Republicans and anti-JCPOA advocates were concerned about since the negotiations started: "Iran is exploiting the exemption mechanism, outside of any public oversight, to systematically weaken as many JCPOA limitations as possible."

Naturally, anti-deal scholars and commentators are taking this latest report and drawing more serious conclusions.  First is that the Obama administration deliberately kept information secret.  "[I]f this Iran deal is so good," asked AEI's Marc Thiessen, "why is the administration doing all of this in secret?"  Commentary's Jonathan Tobin writes that "[t]he exemptions granted to Iran mean that almost everything President Obama and Secretary of State John Kerry have said about the Iran deal since January was a lie."  The fact that the White House or the State Department didn't disclose these exemptions, according to Jennifer Rubin, "heightens fears that the administration is entirely unserious about enforcing the terms of the deal."

And yet, unlike earlier complaints about the administration's lack of transparency when the cash-for-prisoners saga was revealed by the Wall Street Journal, Rubin, Tobin, and Thiessen don't have much ammunition with the same argument.

If the JCPOA required disclosure of its work to the public or declassification of all of their decisions and votes, allegations of impropriety from administration officials would hold a lot more water.  The deal, however, expressly forbids disclosure unless the Joint Commission approves otherwise.  The clause is written in simple English right in the agreement, and it can be found on page 3 of Annex IV for all the world to see: "Except as provided in Section 6 of this Annex which will be subject to the confidentiality procedure of the UN, the work of the Joint Commission is confidential and may be shared only among JCPOA participants and observers as appropriate, unless the Joint Commission decides otherwise."

One can certainly argue that automatic confidentiality built into a major arms control agreement is a terrible precedent to set and complicates congressional and parliamentary oversight of the agreement.  Those making that point would have a solid basis for doing so: without all of the information and correspondence that is made behind closed doors, the U.S. Congress will have a tough time determining whether the Iranians are meeting all of their commitments or how well U.S. diplomats are doing their jobs.  This is one reason why the House and Senate should establish a joint JCPOA commission to monitor the accord as it progresses, an idea raised by Rep. Gerald Connolly earlier this year.

But let’s not pretend that the Obama administration is engaging in a cover up to protect something nefarious.  There isn't much smoke here--and there definitely isn't a fire.