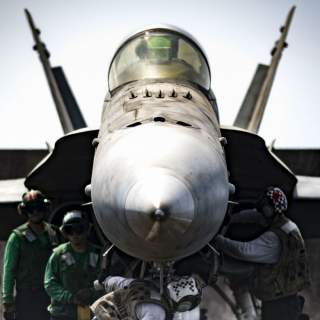 “Eight years in Washington left me with considerable pessimism about the capability of the U.S. policy elites—Democrat as well as Republican—to carry out radical changes in policy if these required real civic courage and challenges to powerful domestic constituencies or dominant national myths.” Anatol Lieven wrote those words in The National Interest just as Barack Obama was about to be inaugurated.

Nearly eight years on, can anyone doubt that Lieven’s pessimism was justified, or claim that the international outlook for the United States is any rosier now than it was then?

If anything, Obama has done more to challenge constituencies and myths than might have been expected, certainly too much for the liking of his critics, and yet these past years can scarcely be called a success for him in foreign affairs. Might it not be time to ask whether it’s possible for the United States even to have a rational foreign policy?

Under Obama, the United States has suffered too many setbacks to count. A hoped-for “reset” with Russia has not come to pass, China is militarily as well as economically more aggressive than for years past. And the latest woe comes by way of my country. A needless and foolish referendum called by David Cameron produced a “Brexit" vote which ended his career, but which was also a grave blow to Washington.

One of the bleaker, if more amusing, ironies of this story is that the fanatical Europhobes on the right wing of the British Tory party who were so passionate for Brexit, are at the same time grovelingly devoted to the United States. They are even ready to subordinate the British national interest to American interest, as patently happened in Iraq. But they don't seem have noticed that the White House and State Department were praying for the British to vote Remain.

For many years now, British membership of the Common Market, then the European Community, then the European Union has been a central aim of American policy. If American leaders were interested in Great Britain, and if the so-called “special relationship” concerned them, it was because British support was sometimes useful in American military venture, but far more because British membership of the EU gave Washington a voice in Europe.

It might sound a little reductive or insulting to suggest that Washington was mainly interested in London as route to Berlin, but Theresa May and Boris Johnson, her simply unbelievable appointment as Foreign Secretary, are about to find out the underlying truth. That was Charles de Gaulle’s real objection to British membership of the Common Market, which he vetoed twice: he believed that Great Britain would be a Trojan horse for American influence. De Gaulle has certainly been vindicated, in many ways.

But above all it’s “what is called, somewhat oddly, the Middle East,” as Churchill put it in the course of a famous speech in 1940, that has exposed the limitations of American policy, with the upheaval in Turkey only the latest case where things never seem to go right for Washington. Turkey was long a lynchpin of American geopolitical strategy but it is now drifting out of the American and Western orbit.

When Lieven wrote the words quoted, eight dramatic years had come to an end, and with them a great experiment in unilateral intervention, founded on a doctrine the neoconservatives espoused and may have seriously believed. “I think there is a potential civic culture in Arab countries that can lead to democratic institutions,” Richard Perle said in 2001, “and I think that Iraq is probably the best place to put that proposition to the test.”

Well, fifteen years on he can’t complain! His proposition was put to the test, all right, and tested to destruction. It seems genuinely not to have occurred to Perle and his gang that, even if “democratic institutions” had been established in Iraq—or Iran or Lebanon or any other Arab or Muslim country—then elections held under them would produce outcomes highly unpalatable to Washington. Politicians, parties and governments strongly hostile to the United States, Israel and the West would be elected, since that would express the sentiment of the people, or “demos” as in “democracy”.

Don’t take this from an English commentator, take it from two eminent Americans. In his time at the State Department, Aaron David Miller was much concerned with the peace process, as it is forlornly known, and after leaving State he wrote an excellent book, with a painfully apt title. The Much Too Promised Land: America's Elusive Search for Arab-Israeli Peace is worth its price for two asides. He says that the Americans are stuck in the Middle East, a region they can't quit but cannot fix, and where, as Miller says, the United States “is not liked, not respected, and not feared.”

Now the obvious conclusion from that would appear to be that nothing the United States does in those parts will work, and that Washington has no good way of dealing with the Middle East, no good options, and no good likely outcomes. The cynical Rooseveltian principle “He’s a son of a bitch but he’s our son of a bitch” just doesn’t work in a region where they’re all sons of bitches.

Not the ordinary peoples of Iraq, Syria and Egypt, of course, men and women and children, most of whom just want to be left alone to lead their lives. But in American terms, there are no benevolent political actors, no true friends—or even predictable foes. As an Israeli politician has said, “In these parts, my enemy’s enemy is still my enemy.”

Is there are larger conclusion to be drawn? If the unilateral intervention of the previous administration was a total failure, and if the alternative policies followed under Obama have met with very limited success, might it not be time fundamentally to reassess the American role as a would-be but not very successful global superpower? Maybe that’s what’s at the back of the minds of some of those who have rallied to the improbable figure of Donald Trump.

This is the second in a series of essays on the future of American primacy. You can read the first essay, “The Future of U.S. Primacy: Power to Lead, But No Longer to Command” by Leslie H. Gelb, here.

Geoffrey Wheatcroft is an English journalist and author, whose books include Yo, Blair! (Politico’s Publishing, 2007), The Strange Death of Tory England (Allen Lane, 2005) and The Controversy of Zion (Perseus Books, 1997), which won a National Jewish Book Award.