Regime Change Will Come to Iran (without U.S. Interference) 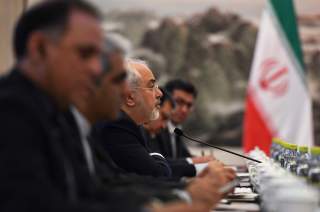 The recent protests springing up in Iran are the most serious to afflict the Shia government in Teheran since 2009. They represent an increasing desire, especially among those born after the 1979 revolution, to see their government make fundamental changes, most pointedly to their economy. If these political forces eventually succeed, then the threat Iran poses to the region could decrease markedly.

The best thing the United States could do to facilitate this development, however, is to let the people of Iran reform their country from within. Americans are famous for our “can do” attitude—remaining passive cuts across our grain—but for a real change in the Iranian government to take place, the pressure must come from within without any ”help” from outside interests.

The core issue in protests that began in June 2009 was the disputed presidential election primarily between incumbent Mahmoud Ahmadinejad and two main challengers, Mir-Hossein Mousavi and Mehdi Karroubi. Masses of people believed the results of the election were badly rigged by the ruling mullahs, claiming that the real winner was Mousavi.

The mullahs crippled the protests by shutting down social media and phone service, and in February 2011, they imprisoned Mousavi and Karroubi and their families. Once those two men were no longer available to lead, the people had no one around whom to center the movement, and it died

This time, however, the uprising wasn’t spawned by a single event, but had been building for a long time.

In October 2015 when the Joint Comprehensive Plan of Action (JCPOA) was signed between Iran and the five permanent members of the UN Security Council (plus Germany), President Hassan Rouhani promised Iranians that they would see an improvement in the economy, more jobs and better salaries as a result of the lifted sanctions. In 2015, a Business Insider report stated that “Iranian President Hassan Rouhani said after he elected as a president that job creation is the most significant issue in the future of the country's economy.”

Many in Iran believed that the JCPOA would be the beginning of the end of their isolation, an improvement in their standards of living, and an end to the counterproductive anti-Americanism of Tehran. Despite pervasive rhetoric against the United States from the hard-liners and mullahs, more and more of the Iranian population––especially among the young––view America in increasingly positive terms.

“As a professor at Tehran University, I would tell you that less than 10 percent of students support the slogan ‘death to America’––and many of those 10 percent are thinking of political careers,” said political science professor Sadegh Zibakalam. “But even among that 10 percent, I’m not sure how genuine their anti-American sentiment is.” While anti-Americanism has been on the wane, anti-Iranian government sentiment has begun to rise.

Initially the people were willing to give Rouhani time to prove that things would get better. A year after the agreement went into effect, however, patience began to run thin because, as Behnaz Abbasi, a twenty-six-year-old accountant put it, “Since the sanctions were lifted, things have become even worse. . . . We thought things would get better,” she lamented, “but for us it’s as if the deal never happened.” Many of the Iranians, however,

In late 2017 a growing number of Iranians no longer bought the idea that America was the source of their problems. Instead, they blamed the corrupt and ineffective theocratic government in Teheran. The trigger that began this round of protests came when the government spiked the prices of many daily commodities beyond what most people could afford. There was another compounding effect, however, about which few in America are aware, and which bodes ill for Teheran’s foreign political ambitions.

Many of the protesters were motivated by the billions the regime spends on military operations in Iraq, Syria and Lebanon. Some protesters carried signs that said “Leave Syria, think about us!” and “Death to Hezbollah!” They were upset because their government has been unable to reduce unemployment or raise wages, yet it has still found the means to spend an estimated $15 billion to $20 billion annually on military operations in Syria, Iraq, and on Hezbollah in Lebanon. The regime appears unwilling to curtail its foreign spending and unable to satisfy domestic needs—and is trying to solve the problem by suppressing its population.

Upwards of 3,700 protesters have been arrested thus far, and twenty-one of them have been killed. To further squelch the uprising, as in 2009, the government has sharply curtailed the internet and use of social media. These efforts have succeeded in taking the wind out of the protests––for the moment.

These strong-arm tactics did nothing to resolve the fundamentals that led to the uprising, and in all probability they have succeeded only in temporarily suppressing them. Unless the government grants considerable freedoms and makes meaningful economic changes, the unrest is only going to grow.

Iranian public dissatisfaction was on display after Rouhani made a January 22 television appearance that was intended to soften attitudes towards the government. His efforts backfired. Following the interview, Iranian reformist Sadegh Zibakalam tweeted “I wish Mr. Rouhani could . . . understand that he is insulting people’s intelligence by [focusing on] artificial nonsense and superficial questions and answers instead of addressing serious and real issues and problems in the society.”

Washington must show patience in understanding that movements take time to develop, but most importantly, to acknowledge that this is an internal Iranian issue. Any attempts to externally “solve” it or “help” the protestors will almost certainly backfire.

The best thing that could happen to U.S. interests in the region would be for the government in Tehran to end its support of terrorism, maintain the pledge not to develop nuclear weapons, and usher in a democratic and peaceful regime. Trying to force the matter using military means from Washington will not facilitate this outcome. The United States should therefore give the Iranian people the time necessary to resolve the matter on their own, as they may demand the regime cease supporting military operations abroad, facilitating U.S. national interests in the process.