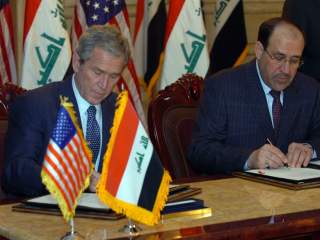 President Obama’s Middle East policy remains highly contentious. As in any policy debate, the president’s critics are entitled to their own opinions. They are not, however, entitled to make up their own facts. Yet a growing number of hawks are doing just that.

One graphic example is the favorite pastime of blaming Obama for the chaos in Iraq. Specifically, critics excoriate him for withdrawing U.S. troops from that country. Jeb Bush has featured that argument in numerous campaign speeches, and other GOP presidential candidates, including Marco Rubio and Carly Fiorina, have done the same. In his December 7 program on Fox News, host Bill O’Reilly also explicitly blamed Obama for the troop withdrawal and its negative consequences.

Leaving aside the very real question of whether a continuing U.S. military presence in Iraq would have thwarted the surge of sectarian violence (or at least done so without incurring an unacceptable number of American casualties), the reality is that George W. Bush, not Obama, signed the withdrawal agreement. Surely the critics, especially President Bush’s brother, must be aware of that fact.

They are exceedingly vague about what they think Obama should have done in light of that existing agreement. Do they believe that he should have ignored Bush’s handiwork and kept U.S. forces in Iraq over the explicit objections of the democratic Iraqi government that Washington helped install in power? Not only would such a move been brazenly illegal, but it also would have defied that reality that the overwhelming majority of Iraqis by the beginning of 2009 wanted U.S. troops out of their country. Public opinion surveys at the time confirmed that only the Kurdish population favored a continued presence.

To the extent that hawks address the issue at all, they resort to vague comments that the president should have renegotiated the agreement with Baghdad. But the Iraqi government made it clear that the only way it would even consider doing so was if Washington was willing to make U.S. military personnel subject to Iraqi law. The United States does not do that without extensive safeguards even in host countries such as Germany, Japan and South Korea, which are mature democracies with court systems that include reliable due process protections. It is highly doubtful that American conservatives would have endorsed a renegotiated agreement that made U.S. troops subject to the tender mercies of Iraqi justice. It is more likely that they would have verbally eviscerated Obama for accepting such terms.

The episode illustrates the continuing unwillingness of conservative hawks to acknowledge the reality that the Bush administration set in motion the policies that destabilized Iraq and led to the current chaos that has now spread elsewhere in the Middle East. It is far easier and more ideologically satisfying for GOP partisans to make Barack Obama the scapegoat for the ongoing debacle. It is also unethical to do so. We need a substantive debate about U.S. policy toward the Middle East in general and Iraq in particular. But that debate must acknowledge the pertinent facts, even if they are politically and ideologically inconvenient.

Ted Galen Carpenter, a senior fellow at the Cato Institute and a contributing editor at the National Interest, is the author or coauthor of ten books on international affairs, including most recently, Perilous Partners: The Benefits and Pitfalls of America’s Alliances with Authoritarian Regimes (2015).