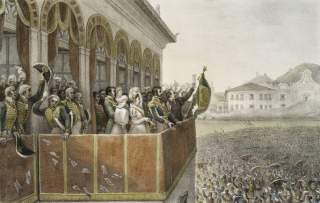 The public is pretty cranky these days: Americans are unhappy with the presumptive nominees of the Democratic and Republican Parties. The dislike for Hillary Clinton and Donald Trump is at record-breaking levels relative to other major party standard bearers over the last thirty-six years. Americans are also gloomy about the state of the economy (Republicans more so than Democrats), and anxious about foreign entanglements, especially in the Middle East.

These sentiments are nothing new. American officials and those who run for office are generally unpopular. And an individual’s economic outlook is notoriously volatile, contingent on a few relevant factors that are subject to change.

Foreign policy views are more consistent in the sense that few Americans are committed interventionists, but, as I noted last week, the elites who populate the American foreign policy community tend to see public will as essentially irrelevant, because it is malleable in the hands of a skillful leader. The trouble arises when public sentiment shapes leaders’ perceptions of what is possible at a given time, but not enough to change their positions. The end result is often a dramatic gap between the ends that policymakers seek and the means available to achieve them.

For example, as my Cato colleague Brad Stapleton explains in a recent paper, the Obama administration has employed a light footprint, combatting “foreign security threats with standoff strike capabilities and small contingents of Special Operations Forces, often in support of indigenous ground troops, in lieu of major contingents of U.S. ground troops.” This represents a tactical shift, not a strategic one. The Obama administration remains as committed as its predecessor to eradicating terrorism, and promoting democracy and human rights, but it is unwilling to employ substantial resources to achieving those goals.

Brad wisely recommends a different approach. In the wake of the wars in Iraq and Afghanistan, and amidst ongoing strife throughout the greater Middle East, it is imperative to rethink strategy, including both ends and means. After fifteen years of warfare, it is abundantly clear that military force can do little to defeat terrorism or catalyze democratization. The United States should therefore adopt a gradualist nonmilitary strategy, which conceives of the eradication of terrorism and the spread of liberal democracy as very long-term goals. Under such a strategy, military force should be used much more sparingly to achieve limited objectives in extraordinary circumstances. I agree. But, sometimes, leaders can convince the public to support a particularly ambitious foreign agenda. Confident of their powers of persuasion, they refuse to modify their aims. And pundits cheer them on from the sidelines, stressing the importance of leadership, and celebrating the virtues of boldness. Prudence and restraint? Who needs it? We’re the U.S. of A!

For example, in a full-throated defense of the “Hillary Clinton Doctrine,” Jeffrey Stacey admits that she “would have a hard time building sufficient support for her robust foreign policy platform among the American people,” but Stacey doesn’t suggest that Clinton change course, or take public sentiment into account. On the contrary, her approach offers hope for the future, whereas “Obama’s efforts [have] come up short.”

Ambitious leaders can shape public opinion through threat inflation and fearmongering. Interventionist elites know that skeptics will have a very difficult time ending a war once it is started. The hawks puts the nation’s prestige on the line. When things turn sour, the public wants to double down, unwilling to see the country to suffer an ignominious defeat. Americans are especially loathe to admit that the heroic sacrifices made on their behalf by U.S. troops might ultimately have been in vain.

There’s something unseemly about a U.S. foreign policy community that consistently defies the wishes of the American people, repeatedly making mistakes, and expecting things to magically turn around. But it is worse, to attempt grandiose foreign policies geared to shaping major regions in the face of clear public sentiment for a more modest approach. That leads to strategies that are almost sure to fail, given the limited resources available.

Ian Bremmer had it right in his book, Superpower: Three Choices for America’s Role in the World. After a thorough review of three distinct approaches, Bremmer opts for what he calls “Independent America”. This includes leading the world by example, and focusing on domestic priorities in order to establish a strong and vibrant society here at home in order to engage with the rest of the world through voluntary and peaceful means. This is different, however, from attempting to dictate how others should live their lives. If U.S. leaders adhere to such an approach, he explains, they “will make fewer costly mistakes,” and, crucially, they can count on “strong and lasting public backing.”

Bremmer concludes in his book: “At this moment in our history, the American people will not support costly inference in countries and questions they don’t care about, and there is no credible evidence that this trend, reflected in many published polls, will prove short-lived.” In the face of such critical constraints on the conduct of U.S. foreign policy, U.S. elites would be wise to modify their objectives.

Christopher A. Preble is vice president for defense and foreign policy studies at the Cato Institute.
Image: Wikimedia Commons