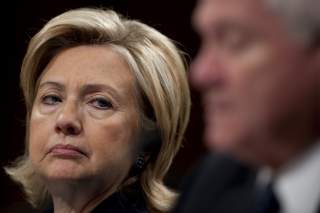 Several recent reports suggest that the foreign policy establishment here in DC is looking forward to Barack Obama’s departure from office. Most believe that Hillary Clinton will be elected president, and they “are laying the groundwork for a more assertive American foreign policy.”

This bipartisan consensus, explains the Washington Post’s Greg Jaffe, “is driven by a broad-based backlash against a president who has repeatedly stressed the dangers of overreach and the need for restraint.”

In a rare moment of agreement, Donald Trump also believes that Obama has been weak and inconsistent with respect to the use of American military power. Trump often celebrates his disdain for the establishment, but, in certain instances, he agrees with them.

It is notable, therefore, when two members of the foreign-policy establishment, individuals who have served in both Republican and Democratic administrations, counsel caution.

“For decades now,” write Aaron David Miller and Richard Sokolsky, “America has been trapped in a Middle East it cannot transform nor leave, and where bold ambitions and transformational visions more often than not go to die. That calls for a cruel and unforgiving assessment of U.S. interests and the smart application of American power and leadership, mixed with a healthy dose of prudence and caution, to protect them.”

the time for American created transformational diplomacy in this region has long passed. What we have recommended is geared to the sober realities of a broken, angry, and dysfunctional Middle East in the throes of a major transition to an uncertain and perhaps chaotic future for some time to come.

What explains the rest of the foreign-policy establishment’s childlike optimism? Why do so many of the men and women responsible for managing relations between the United States and the Middle East revert to the same playbook, even in the face of overwhelming evidence that U.S. meddling has often had horrible consequences?

The simplest explanation is because “often” isn’t “always.” The historical analogies that people reach for explain the degree to which they assess ahead of time the wisdom or folly of intervention in a given place. To oversimplify, there are two kinds of people: those who think that America has been too reluctant to use force, and those who think it has been too anxious to do so.

“My mind-set is Munich; most of my generation’s is Vietnam,” Madeleine Albright explained to the New York Times. “I saw what happened when a dictator was allowed to take over a piece of a country and the country went down the tubes. And I saw the opposite during the war when America joined the fight.”

Albright tangled with then JCS Chair—and Vietnam combat veteran—Colin Powell. “What’s the point of having this superb military that you’re always talking about if we can’t use it?” an exasperated Albright asked Powell. Powell confided in his memoir that the question almost caused him to have an aneurysm. “American GIs were not toy soldiers to be moved around on some sort of global game board.”

We can see equally well the competing analogies that later generations rely upon. Those who reached adulthood in the 1990s might fight over Rwanda or Bosnia. In the first case, the United States allowed a genocide to occur; in the latter, the story goes, U.S. action stopped it.

Today’s millennials, the men and women who will populate the administrations of presidents in the not-too-distant future (and the few who already do), may contrast Iraq with Syria. In the former case, the United States toppled a murderous dictator, but struggled to repair the country left behind. Once bitten, twice shy, many Americans are now reluctant to be held responsible for the chaos that will surely ensue in Syria if Bashar al-Assad’s regime collapses entirely—but are sickened by the civil war that rages there as Assad clings to power.

Research shows that our experiences during our formative years, mostly between the ages of sixteen and twenty-four, will powerfully shape political views throughout our lifetimes. On the other hand, people rarely update their basic political beliefs after the age of forty or forty-five. Dramatic or even traumatic events can have an effect, however.

Two such events reshaped many Americans’ foreign-policy views in the late 1980s and the early 1990s: the peaceful end of the Cold War, and America’s swift and apparently decisive victory over Saddam Hussein in 1991. George H. W. Bush exulted in what this meant for U.S. foreign policy going forward: “By God, we’ve kicked the Vietnam syndrome once and for all.”

Today’s foreign-policy establishment is looking to kick the Iraq syndrome. And hard. Hillary Clinton has allowed herself moments of unguarded triumphalism—recall her “we came, we saw, he died” comment, referring to Muammar el-Qaddafi—but it’s reasonable to think that she is aiming for more than a few small wins (if Libya can even be called that) for smart power.

If she is elected president on Tuesday, she’ll be pushing on an open door. Indeed, the establishment will be pushing it with her. And they’ll co-opt Donald Trump if he beats the odds and wins. Americans want less military intervention, not more. But public sentiment is irrelevant, as far as this country’s de facto ruling class is concerned.

Buckle up, America. You’re in for a wild ride.