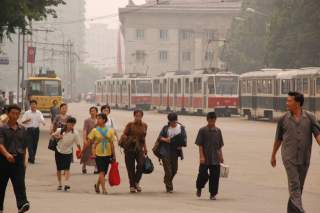 North Korea has completed its first Korean Workers’ Party congress in thirty-six years. The ruling elite appeared to be getting along fine despite international sanctions. Washington needs to find a new approach toward the North. The so-called Democratic People’s Republic of Korea poses one of the most vexing challenges to American policy. For more than twenty years, U.S. presidents have insisted that the DPRK cannot be allowed to develop nuclear weapons, and yet it apparently is preparing for a fifth nuclear test.

A military strike (proposed by Ashton Carter before he was appointed Defense Secretary) would risk engulfing the peninsula in war. Instead, the United States has relied on sanctions. Every time Pyongyang misbehaves—especially tests a nuclear weapon or launches a missile—American officials impose tougher domestic economic penalties and press for harsher UN sanctions.

After North Korea’s latest nuclear test earlier this year, China agreed to a new round of restrictions. The increased penalties had no impact of North Korean policy. On the contrary, in early May the Kim regime used the party congress to highlight Pyongyang’s nuclear program.

Foreign sanctions usually stiffen domestic resistance. Even friendly populations resent outside meddling. And when a government believes its policies to be necessary for survival—as, it would seem, does the North Korean regime—the chance of forcing change short of war is small.

Sanctions have had an impact. The People’s Republic of China has been losing patience and appears to be more tightly regulating cross-border commerce. Some North Korean representatives of blacklisted agencies moved from China to Southeast Asian nations. The North Korean regime has resorted to smuggling in order to bring in banned products. Moreover, Pyongyang appears to be having more difficulty selling weapons abroad.

Nevertheless, Beijing continues to moderate the impact of sanctions. Illicit goods still cross the border and some observers expect China’s commitment to fade as Western attention moves elsewhere. Beijing more fears chaos on its border than a North Korea with nuclear weapons. President Xi Jinping recently declared: “As a close neighbor of the peninsula, we will absolutely not permit war or chaos on the peninsula.”

So far, the Xi government refuses to halt energy and food shipments, the only step that would apply bone-crushing pressure to the Kim regime. Even then, Pyongyang might refuse to comply. Russian diplomat Georgy Toloraya has argued that outside sanctions “are in fact a blessing for mobilizing the whole country against such an external threat.” The regime already is blaming the West, preparing its people for what it calls an “arduous march.”

Throughout the Cold War the North protected its autonomy even from its nominal allies, China and the Soviet Union. During the late 1990s, the regime survived the virtual collapse of the economy and starvation death of a half million or more North Koreans. The Kim dynasty might survive similar hardship in the future. Unfortunately, the uniform experience of sanctions is that they hurt those with the least resources and influence. In nations as varying as Burma, Iraq, Russia, Sudan, and Yugoslavia, Western sanctions impoverished the many while only inconveniencing the leadership.

That appears to be the case in North Korea. So far the elite have prospered, despite penalties directed against luxury imports. Lu Chao, a Senior Researcher at China’s Academy of Liaoning Social Science, argued that “there are so many channels for importing these goods. The ban is just propaganda and has no significance.”

The streets of Pyongyang suggest he’s right. Privileged North Koreans have money and goods which were lacking only a few years ago. The Washington Post recently reported on “Pyonghattan,” home to North Korea’s privileged elite: “They like fast fashion from Zara and H&M. They work out to be seen as much as to exercise. They drink cappuccinos to show how cosmopolitan they are. Some have had their eyelids done to make them look more Western.”

In contrast, argued Andrei Lankov of Kookmin University, “the average North Korean will also bear the brunt of the sanctions.” For instance, restrictions on the minerals trade will directly hit engineers, miners, truck drivers, and those serving mining communities.

Hunger continues to stalk much of the land and health care is lamentable. The latest round of sanctions has increased hardship. Choi Ha-young, chairman of the Love North Korean Children Charity, complained: “Currently, due to the UN sanctions, people in the lowest class are really impacted.”

Unfortunately, Washington seems to have only one response to the North: increase sanctions. However, this policy is a dead-end. The U.S. and its allies must find a new strategy toward Pyongyang.