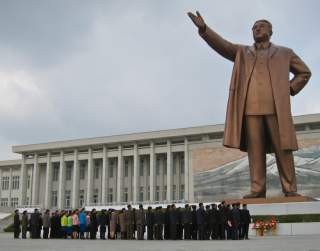 Dealing with North Korea brings to mind Sisyphus, the mythological Greek king condemned for eternity to roll a stone up a hill, only to watch it roll back down. Whatever the United States does, Kim Jong-un will fire missiles, test nukes and threaten to lay waste to his enemies.

Now the Obama administration has applied sanctions to him personally, though for human rights violations, not security concerns. The State Department explained that Kim was “ultimately responsible” for what it termed “North Korea’s notorious abuses of human rights.”

There are many, of course. No political rights. No civil liberties. No freedom of speech. No religious liberty. Brutal detention camps. And the notorious Songbun system of social classification. The so-called Democratic People’s Republic of Korea ain’t a nice place for anyone other than the Kim family and friends.

Now any property owned by Kim and ten of his top officials in the United States will be frozen. And Americans will be prohibited from doing business with them. The administration predicted that the impact from its action would ripple around the globe, making it harder for those named to bank overseas. The sanctions might even dissuade subordinates from carrying out Kim’s orders lest they, too, end up on Washington’s blacklist. “Lifting the anonymity of these functionaries may make them think twice from time to time when considering a particular act of cruelty,” one anonymous Obama aide told CNN.

North Korea’s abuses are great and the American frustrations are real. Anyone handling DPRK policy at the State Department is entitled to have a good scream every week or so. And if there was some way to deliver the North Korean people without plunging the peninsula into war, Washington should do it. But no one has figured out how to do so.

Unfortunately, imposing penalties without impact won’t turn him into a born-again humanitarian. And his subordinates more likely fear a god-king who has executed some four hundred of his own officials, including his uncle, than the prospect of their name ending up on a list in Foggy Bottom.

This is feel-good policy at its worst—which even the State Department admits, kind of. Acting Undersecretary of State Adam Szubin said the measure demonstrated America’s “determination to see” human rights abuses stopped. Targeting Kim’s nonexistent investments and transactions might not stop the abuses. But doing so would demonstrate U.S. officials’ “determination.” Frankly, putting out the statement alone would have accomplished that.

Kim isn’t the only foreign dictator who can’t do business in America. Zimbabwe’s Robert Mugabe, Syria’s Bashar al-Assad and Belarus’ Alexander Lukashenko also have been blacklisted. Also, unsurprisingly, to no effect. All still oppress their peoples with the assistance of abundant numbers of loyal apparatchiks.

If the principle makes sense, one wonders why the list is so short. It should start with the leaders of China and Russia. Virtually all of the ruling establishments throughout Central Asia should be targeted. Sanctions belong on the leaders of Eritrea and Ethiopia, as well as of a multitude of other African states, such as Algeria, Uganda, Angola and the Democratic Republic of the Congo. The rulers of U.S. allies Saudi Arabia and Egypt should be named. Along with the Islamist leaders of Iran, with which America is attempting to improve relations. And Cuba’s Castro brothers.

Sanctions can be a useful policy tool, but they should serve a purpose. They also should have a possibility of achieving their objective, meaning they should have some impact on their target. The dictator or flunky at least should be aware that he’s been sanctioned. None of these criteria apply in Kim’s case.

Even worse, there is a downside to the sanctions. It will be harder for both nations to shift course and begin a dialogue. That might seem to be an unlikely prospect, but then, few people expected Richard Nixon to ever talk with Mao Zedong.

In the case of North Korea, there is no military solution and sanctions so far have not changed DPRK nuclear policy. With Pyongyang responding to isolation by continuing its missile and nuclear programs, a bilateral conversation at some point seems necessary and inevitable.

But that now would require the United States to engage a regime headed by someone under direct sanction. And Kim would have to swallow his pride and accept the appearance of being a supplicant seeking favor from those threatening him. Negotiating something useful always would be difficult without adding a new obstacle.

While targeted sanctions avoid punishing a largely helpless population in the hopes of influencing a regime which cares little about its people, they have yet to actually bring any government to heel. No reforms of note have occurred in Belarus, Syria or Zimbabwe, despite the United States having named those nations’ leaders. Russian billionaires linked to Vladimir Putin may be frustrated by their travel ban, but they haven’t overthrown him. And Crimea remains part of Russia.

Such penalties appear to be most effective in allowing officials to satisfy critics and feel good by doing something without actually doing anything—useful, anyway. That’s obviously not good policy. In fact, it actually encourages policymakers to ignore problems as they worsen. Like North Korea.

North Korea is steadily adding to its nuclear weapons and improving its missiles, as well as abusing its population. Current policy, essentially to isolate him, has failed. Instead of trying something new, Washington will confiscate Kim’s nonexistent bank account and consider its work done.

Policymakers must grapple with the tough issues. What should U.S. policy be toward the North as a de facto nuclear power? Why does America remain deeply involved in a conflict best managed by the prosperous and populous surrounding states? Is there any way to win greater assistance from Beijing? Is it worth negotiating with Pyongyang over issues other than denuclearization? There are no easy answers, but Washington’s time would be better spent addressing these issues than in concocting fanciful punishments for the North’s leader.

No one can blame President Barack Obama for not wanting to end up like Sisyphus. However, imposing personal sanctions on Kim looks like an act of desperation: nothing else has worked, so why not try this? Unfortunately, they may make it even harder to find a workable solution to the North Korea problem.