Sanders Should Not Get a Pass on Foreign Policy 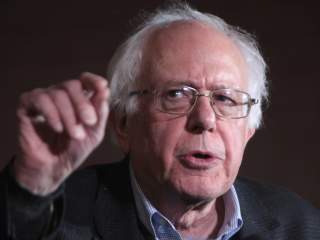 Some of the most respected figures and intellectual minds in the world of diplomacy came out with a letter on January 19 expressing concerns about Sen. Bernie Sanders’ foreign policy acumen. The joint letter—signed by ten former U.S. ambassadors, undersecretaries and assistant secretaries who served in both Democratic and Republican administrations—was abundantly clear about the message that it sought to send: Sanders may be a good man, a dedicated public servant espousing progressive values, and a hard-charging, passionate legislator, but he doesn’t have the experience to be America’s next commander-in-chief.

“[W]e need a Commander in Chief who knows how to protect America and our allies and advance our interests and values around the world,” the former ambassadors and foreign policy officials wrote. “The stakes are high. And we are concerned that Senator Sanders has not thought through these crucial national security issues that can have profound consequences for our security.”

These may seem like tough words from people like Wendy Sherman, Nicholas Burns and Derek Chollet, all of whom are inherently diplomatic thanks to the nature of their work. The signatories and authors of the letter, however, were actually polite in their criticisms of Sen. Sanders’ foreign policy record.

As he has made clear on the campaign trail, Sanders’ pet issues consist of income inequality, Wall Street reform, breaking up the big banks, taxing the wealthy at a higher rate, and offering universal healthcare and education in public universities. As a result, he simply hasn’t spent much time focusing on the international conflicts and crises that the next commander-in-chief will have to deal with on the very first day of his or her presidency.

Curiously, the debate moderators, campaign reporters and hosts on the Sunday talk shows are taking it pretty easy on Sen. Sanders when it comes to the rough-and-tumble world that we live in. Either I haven’t been paying enough attention, or the likes of NBC’s Chuck Todd and CNN’s Wolf Blitzer would rather talk to Sanders about his poll numbers in relation to Secretary Hillary Clinton rather than what a President Sanders would do on Iran, ISIL and Afghanistan, or how a President Sanders would leverage America’s diplomatic and military might around the world.  The fact that a small sliver of the fourth Democratic Debate on January 17 delved into foreign policy and national security issues should have been very concerning to Americans of both parties. The president of the United States is not only economist-in-chief and middle-class supporter-in-Chief, but also commander-in-chief.

Sanders should not be let off the hook. How would he wage the war against the Islamic State, an organization that will continue to plan attacks against the U.S. and its Arab and European allies and continue to govern land well after President Obama leaves office?

Would a President Sanders do anything differently than the present strategy? Simply restating that he voted against the war against Saddam Hussein is not an adequate answer. In fact, it’s irrelevant to the issue at hand: degrading and defeating the Islamic State militarily, squeezing its finances, taking out its leadership and helping Iraqis and Syrians to create the kinds of political conditions on the ground that will ensure that Bashar al-Assad is finally out and Iraq’s Sunnis are enrolled as partners in a united, technocratic national government in Baghdad.

With the exception of a couple of debate segments and a speech on democratic socialism that he delivered last November, we don’t have a clue as to how Sanders would prosecute the war.  Other than a vague mention of re-imposing economic sanctions, Americans don’t know precisely how he would respond if Tehran was caught cheating on its nuclear commitments under the Joint Comprehensive Plan of Action. Can we expect the United States “to move [towards] warm relations with a very powerful and important country” as Sanders proposes, if the Iranians continue to support for terrorist groups and expand its arsenal of ballistic missiles?

Reporters and moderators on the Sunday shows should start asking Sen. Sanders these kinds of questions.