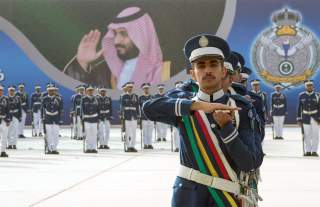 The de facto ruler of the Kingdom of Saudi Arabia, known as MbS, has been busy wreaking havoc internationally, punishing political enemies domestically, loosening social controls at home, and burnishing his image abroad. Amid rising opposition to Saudi-generated carnage in Yemen, the Trump administration appears to be abandoning proliferation concerns in seeking to sell nuclear reactors—even as it complains about Iran’s presumed nuclear ambitions.

MbS presides over a virulently intolerant authoritarian theocracy, but no matter. His modest social innovations—most notably allowing women to drive and opening cinemas for everyone—have created the image of a Western modernizer, allowing him to accumulate a host of besotted liberal groupies, such as New York Times columnist Tom Friedman.

The Saudi state is an artifact of Western militarism and imperialism, growing out of the dissolution of the Ottoman Empire after World War I. Abdul Aziz ibn Saud eventually fulfilled his lengthy quest to unify the peninsula. Discovery of oil in 1938 gave his country an unexpected international importance.

Four decades ago the Islamic revolution in Iran, which inspired Shia in the Kingdom of Saudi Arabia’s eastern provinces, and seizure of Mecca’s Grand Mosque by Islamic extremists caused the monarchy to turn its theocracy in a totalitarian direction. The royals enforced the Wahhabist clergy’s fundamentalist interpretation of Islam in return for the latter urging obedience to the Saudi state. Hence, ruling princes mixed private libertinism with public piety, treated women as inferior, prohibited non-Muslim faiths, and deployed the mutawa, or religious police. Also, they provided large-scale subsidies to spread Wahhabism abroad, through mosques, schools, teachers and textbooks.

The result was a decrepit, corrupt gerontocracy undermining virtually every Western value and interest. However, the doddering monarchy, passed among the aging sons of ibn Saud, possessed oil and money aplenty. This earned the regime plenty of affection in the West, and especially the United States.

MbS took firm control, brutally crushing any potential opposition. He transformed an inefficient but collegial monarchy into a far more ruthless but stunningly incompetent administration. So far, however, pervasive failure has only encouraged MbS to double down, usually to the detriment of anyone not a member of his faction of the Saudi royal family. So far his rule—of course, his father formally remains king—can be characterized as the good, the bad and the ugly.

The good is social reform. MbS has reduced the power of the religious police, taken aim at religious extremism, ended some restrictions on women, including on driving, and otherwise begun to moderate social strictures. He also sought to reform the kingdom’s finances to reflect lower oil prices. He reduced government subsidies for a time, before retreating in the face of discontent from a public grown dependent on the state. For these efforts he warrants praise, but hardly the stream of accolades for being a visionary modernizer.

The bad is really bad: domestic political and religious repression. Human-rights groups consistently find the Kingdom of Saudi Arabia to be one of the world’s most oppressive nations. For instance, Freedom House rates the KSA unfree. The Kingdom, reported Freedom House, “restricts almost all political rights and civil liberties through a combination of oppressive laws and the use of force.” The rulers “rely on extensive surveillance, the criminalization of dissent, appeals to sectarianism, and public spending supported by oil revenues to maintain power.”

Amnesty International came to a similar conclusion: “The authorities severely restricted freedoms of expression, association and assembly. Many human-rights defenders and critics were detained and some were sentenced to lengthy prison terms after unfair trials. Several Shia activists were executed, and many more were sentenced to death following grossly unfair trials.” AI went on to report torture, other ill-treatment, sexual violence, and more against those held.

The State Department’s fifty-seven-page human-rights report cited “citizen’s lack of the ability and legal means to choose their government; restrictions on universal rights, such as freedom of expression, including on the internet, and the freedoms of assembly, association, movement, and religion; and pervasive gender discrimination and lack of equal rights that affected most aspects of women’s lives.” There was no judicial independence or due process. There was “arbitrary interference with privacy, home and correspondence,” and much more.

Those who oppose the regime feel the lash. In January 2016 the KSA executed twenty-seven Shia, mostly protesters against Sunni tyranny in 2011. Among them was the noted cleric Sheikh Nimr al-Nimr, who backed the demonstrators. All were convicted of “terrorist” offenses, meaning opposing the absolute Sunni monarchy. Imams, columnists and bloggers were arrested last year for simply saying nothing, that is, failing to back the regime’s attack on Qatar.

Another noted victim is Raif Badawi, a dissident blogger who criticized religious repression and mistreatment of women, who in 2014 was sentenced to ten years imprisonment and one thousand lashes. His lawyer subsequently was sentenced to fifteen years, while his wife fled to Canada.

The list of victims continues to lengthen on MbS’s watch. For instance, in January the founders of the Union for Human Rights, Abdullah al-Attawi and Mohammed al-Otaibi, were sentenced to seven years and fourteen years, respectively, in prison. More broadly, reported Human Rights Watch, last year “Saudi authorities continued their arbitrary arrests, trials, and convictions of peaceful dissidents. Dozens of human-rights defenders amid activists continued to serve long prison sentences for criticizing authorities or advocating political and rights reforms. Authorities continued to discriminate against women and religious minorities.”

In December Amnesty International observed that “in the months since the Crown Prince’s appointment, we have seen little to believe that his overtures are anything more than a slick PR exercise. In fact, the dire rights record in the country has far from improved. Witness the ongoing wave of arrest targeting journalists, critics and religious scholars. Virtually all the country’s prominent civil society activities and human rights defenders, including many who had been vocal on corruption, are currently behind bars. Just like his predecessors, the Crown Prince seems determined to crush the Kingdom’s human rights movement.”

Even onetime privileged elites are not exempt. Last fall MbS turned the Ritz-Carlton hotel into a prison and arrested a host of leading Saudis, including his cousin, Mohammed bin Nayef, ousted earlier in the year as crown prince. The price of their freedom was to sign over significant portions of their assets. Many were physically abused and required medical attention; one apparently died in custody. Some remain imprisoned, and no longer at a luxury hotel. Others have been barred from travel and monitored through ankle bracelets. MbS justified the shakedown as an anti-corruption campaign. But he spent a half billion dollars on a yacht and $300 million on a French chateau, and was rumored to be the anonymous buyer of the $450 million Leonardo da Vinci painting last year (Riyadh denied the latter). The entire exercise looks like a redistribution of stolen goods, with the chief crook grabbing more of the booty for himself.

Nor does being outside of the country insulate one from the tender mercies of Saudi “justice.” The Guardian and later BBC documented the kidnapping of at least three dissident princes living outside of Saudi Arabia. All were politically influential and turned critical. All disappeared in the KSA, never to be heard from again.

Nor is there any religious liberty in KSA. Explained the State Department: “Freedom of religion is not provided under the law and the government does not recognize the freedom to practice publicly any non-Muslim religion.” The regime criminalizes many acts, “including non-Islamic public worship, public display of non-Islamic religious symbols, conversion by a Muslim to another religion, and proselytizing by a non-Muslim. Shia clerics and activists who advocated for equal treatment of Shia Muslims were arrested.” State rated the Kingdom a “Country of Particular Concern.”

The Kingdom does sponsor an interfaith center—in Vienna, Austria. On his visit to the United Kingdom earlier this month the Archbishop of Canterbury said MBS “made a strong commitment to promote the flourishing of those of different faith traditions, and to interfaith dialogue within the Kingdom and beyond.” Yet in the KSA there is not one church, synagogue, temple, or other non-Muslim house of worship. Even private gatherings risk a raid by the security forces, which can result in arrest. And Human Rights Watch published a report last September detailing the extensive “government hate speech, especially speech by state clerics and in the country’s textbooks,” especially against Shia.

The ugly is most worrisome for the rest of the world. Over the last three decades Riyadh has spent roughly $100 billion to advance Wahhabism around the globe. This strain of Islam is intolerant, emphasizing “the other” and denigrating members of other faiths and less fundamentalist Muslims. As such, it fertilizes the ground in which terrorist seeds have been planted. So far MbS’s supposed commitment to religious moderation and dialogue has not shut this extremism spigot.