Should the U.S. Continue to Guarantee the Security of Wealthy States? 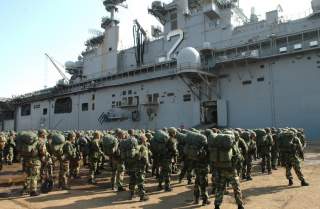 The Center for the National Interest partnered with the Charles Koch Institute to host a foreign policy roundtable. Among the issues addressed was: Should the United States continue to guarantee the security of wealthy states like Japan and South Korea?

The United States has been providing security for Japan since the U.S. occupation began at the end of World War II. At the time, Washington intended to transform the country into a parliamentary democracy and thwart Soviet influence in the Pacific. Similarly, the United States has been providing security for South Korea since the 1950s, when the Korean War ended with an armistice rather than a peace treaty. The United States viewed protecting South Korea—then a poor and underdeveloped state—as necessary to preventing the spread of communism.

However, decades after the Cold War’s end, is it still necessary for the United States to protect two friendly democracies that have grown economically prosperous and militarily capable?

In this portion of the Center for the National Interest and Charles Koch Institute foreign policy round table, Richard K. Betts and a panel of foreign policy experts debate this question. Their discussion emphasizes the potential rise of China, the realities of potential buck-passing, the spread of nuclear weapons, and the United States’ role in Asia.

Betts suggests that the United States should maintain its security guarantees because they ensure a “comparatively cheap way of preventing instabilities and miscalculations that are potentially more problematic and dangerous than they are elsewhere.”

Before answering, though, Betts explains that his opinion probably differs from the rest of the panel. Taken aback by the disclaimer, Andrew Bacevich asks, “Who disagrees with that?” Just about half the panel answers affirmatively.

Ultimately, the panelists’ differing levels of concern about the rise of China significantly influence their range of opinions on whether the United States should continue to provide security guarantees in Asia. Some scholars perceive China as a threat, which tempers their views on allies in Asia accordingly. For example, Stephen Walt acknowledges that “if we care at all about balancing against a rising China … we want to maintain the connections to Japan and South Korea and get them to pull their weight.”

Yet Barry Posen proposes that “a nuclear-armed Japan and a nuclear-armed Republic of Korea are the vehicles for buck-passing in Asia.” His main concern is to “genuinely empower the locals to deal with the Chinese threat. …[which means] having their own nuclear weapons and getting our troops out of their countries.” “It’s a very interesting and promising way to contain China on the cheap,” he concludes.

The panelists also discuss North Korea as a factor in U.S. decision-making about the need for a military presence in Asia. Betts argues that “North Korea is probably the wildest and craziest state in the world. The American deterrent function there … is probably worth continuing, just because of the complete unpredictability of what might happen otherwise.”

Eugene Gholz disagrees, arguing, “I don’t want to be next to the wild and crazy place. … I’m totally grateful that there’s a Pacific Ocean between them and me.”