Should the U.S. Leave NATO? 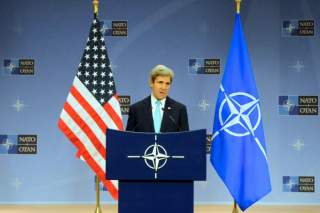 Is NATO a military alliance or social club? The “North Atlantic” Treaty Organization just invited Montenegro to join. With 2,080 men under arms, Podgorica is a military nullity. Having peacefully separated from Serbia years ago, Montenegro neither threatens nor is threatened by anyone. Adding it to NATO is like accumulating Facebook Friends. They do little more than allow preening Washington officials to wander the globe gloating how popular the U.S. is.

During the Cold War NATO was viewed as deadly serious. Washington was determined to defend Western Europe from the avaricious, totalitarian Soviet Union. The allies had been devastated by World War II and faced an aggressive communist superpower. The nightmare scenario was a Red Army armored attack through the Fulda Gap. For years war seemed to be a real possibility.

Then the Soviet Union collapsed. The Warsaw Pact dissolved. The Central and Eastern Europeans raced westward. And NATO lost its raison d’etre. The quintessential anti-Soviet alliance no longer had anything to defend or defend against.

For a time allied officials were nervous about the organization’s future. But as Public Choice economists would predict, institutional instinct took over. Supporters proposed new roles for NATO, such as promoting student exchanges and combating the drug trade. Eventually they subordinated the military to the political, and being less concerned about economic and legal reform, became a geopolitical Welcome Wagon for former Warsaw Pact members. The slogan seemed to be “come one, come all.”

The good times came to a halt last year with the Ukraine crisis. The Baltic States suddenly looked vulnerable and alliance members remembered the little matter of Article 5, which committed them to battle against a nuclear-armed power to protect largely indefensible nations. Worse, the Baltic three, which had been absorbed by the Soviet Union, were irrelevant to the security of the rest of Europe. Nor did Estonia, Latvia and Lithuania add meaningful military assets to the alliance: they currently have, respectively, 5,750, 5,310, and 10,950 men under arms. Americans and Europeans were expected to risk nuclear war as an act of international charity.

Proposals to add Georgia and Ukraine would multiply the dangers. Russian aggressiveness, though unjustified, illustrates how important Moscow views its influence in both nations, which also never were seen as relevant to European security. Both were not only part of the Soviet Union but the Russian Empire. Bringing them into NATO would be seen by Russia as comparable to the Warsaw Pact inducting Mexico and Canada. Washington would not, shall we say, be pleased. The West’s laudable desire to protect the right of Georgians and Ukrainians to chart their own course unfortunately is seen by the Russian government—in part because of maladroit allied policies, such as NATO expansion—as provocative attempts at encirclement. Nothing in Kiev or Tbilisi is worth a nuclear confrontation. Especially one in which the U.S. likely would find most of its European allies back in Brussels locked in a fetal position.

The problem is not just NATO’s recent expansion. An alliance on autopilot ignores changes within existing members. For instance, Turkey is proving to be another area of confrontation that undermines U.S. and European security. Never quite the geopolitical lynch-pin that it was made out to be, Ankara spent years prosecuting a brutal campaign against Kurdish separatists and occupied more than one-third of the Republic of Cyprus, creating an ethnic Turkish state recognized only by Ankara. Turkey turned in an ever more authoritarian and Islamist direction once President Recep Tayyip Erdogan dropped his early liberalizing pretensions. Ironically, he now appears determined to create a presidency modeled after that of Vladimir Putin. So much for NATO promoting liberal democracy. (That always was a job for the European Union anyway.)

Worse, though, is Ankara’s irresponsible shoot-down of the Russian plane. Even assuming that Turkey’s claims as to the Russian incursion and Turkish warnings are accurate, 17 seconds over Turkish territory did not warrant such a deadly response. Indeed, Ankara routinely violates the airspace of fellow NATO member Greece. That policy forces cash-strapped Athens to waste its limited resources responding. One wonders at the Erdogan government’s reaction if Greece chose to down the Turkish offenders. (NATO is talking about bolstering Turkey’s air defenses against Russia; how about aiding the Greeks against Ankara?)

Of course, Turkey knew that Russian forces have no hostile aims—indeed, none of the active combatants, including Syria, are targeting Turkish personnel or materiel. Ankara may have been protecting the illicit oil trade or insurgents in an area dominated by the al-Qaeda-linked al-Nusra Front, or attempting to punish Moscow for backing Syria’s President Bashar al-Assad. The first two undermine American interests. The latter might fit with an official aim of Washington, but runs against the more fundamental objective of destroying the Islamic State. None of these potential Turkish goals justifies allowing Ankara to drag NATO into a war with Russia. My Cato Institute colleague Ted Galen Carpenter suggests defenestrating this misbegotten alliance member.

Striking is how all of these members, new and old, as well as aspirants—the Baltic States, Georgia and Ukraine, and Turkey—degrade U.S. security. Montenegro, at least, plays the harmless role of the Duchy of Fenwick in the Mouse that Roared. Although its inclusion in the alliance will further antagonize an already paranoid Russia, Podgorica really is irrelevant strategically and militarily. The others are not. In a worst case all of them could ensnare America in a war with a nuclear-armed power over modest, indeed, minimal, security stakes. The policy frankly is mad.

However, even if Washington’s NATO commitments did not bring far more dangers than benefits, they would be unjustified. Europe could, if it was so inclined, defend itself. Why, 70 years after the conclusion of World War II, 26 years after the fall of the Berlin Wall, and 22 years after creation of the European Union, are the Europeans still dependent on America?

Retired Gen. Robert Scales, commandant of the Army War College, recently complained that: “At 30,000, there are fewer American soldiers protecting Western Europe, a piece of the planet that produces 46 percent of global GDP, than there are cops in New York City.” But why can’t an area that accounts for almost half of the world’s production (an overstatement, but never mind) and has a larger population than America provide its own soldiers for defense? Why can’t an area of such economic prowess, which has around eight times the GDP and three times the population of its only possible antagonist, Russia, deploy an armed force capable of deterring any threats?

The reason the Europeans don’t do so is because they don’t want to and don’t have to. Some don’t believe that Moscow actually poses much of a threat. Others figure only the nations bordering Russia face any risk, and there’s little interest in “Old Europe” for confronting Moscow over “New Europe.” And almost everyone assumes America will take care of any problems.

Particularly striking is the lack of military effort from those supposedly threatened by the supposed new Hitler to the east. This year NATO-Europe came in at 1.5 percent of GDP, well short of the two percent objective. Only Estonia, Greece (mostly to confront Turkey), Poland (first time ever), and the United Kingdom made that level. Notably missing are France, Germany, and Italy (the continent’s other major powers), Latvia and Lithuania (squealing loudly about Russian threats), and Turkey (challenging Russia over parochial rather than alliance interests).

Over the years American officials have pleaded, cajoled, contended, and begged the Europeans to do more. Even during the Cold War such efforts failed to yield much fruit. They have even less chance of working in the future. Reported Jan Techau of Carnegie Europe: “the dependence of European NATO allies on the United States has further increased since the end of the Cold War, not decreased.” Indeed, he added, “while European membership in NATO has nearly doubled since 1990, defense spending by Europeans has gone down by 28 percent since then.”

First, the U.S. insists that it will never leave. So long as it frenetically “reassures” allies, trying to convince them that Americans are worthy to subsidize Europe, the latter will respond by not doing much. Second, Russia doesn’t threaten America or most of Europe. The latter have little incentive to spend more. Third, domestic economic concerns remain paramount throughout the continent. There are few votes to be gained from supporting greater military expenditures to meet a phantom threat because it would gladden hearts in Washington, Vilnius, and Kiev.

The United States should do in 2016 what it failed to do in 1990. It should announce that the world has changed since creation of a U.S.-dominated NATO. It is time to refashion the alliance for a world in which allies had prospered and enemies had disappeared. One possibility for the future would be a European-run NATO, with America perhaps as an associate member. Another alternative would be a continental defense run alongside the European Union. Maybe there’s something else.

But the time for subsidizing, coddling and reassuring the Europeans is over. American taxpayers deserve as much consideration as European ones. U.S. military forces shouldn’t be deployed to advance interests of greatest concern to other nations. Any future alliances forged by Washington should act as serious military pacts, not international social clubs.