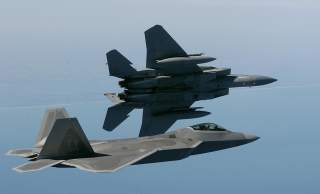 Imagine this hypothetical for a moment. North Korean dictator Kim Jong-un takes to the Korean Central News Agency and begins his speech with the usual invective and inflammatory rhetoric about how evil and duplicitous the United States is. After about twenty minutes of this, he boldly declares that the Democratic People’s Republic of Korea has finally completed preparations for launching the country’s first intercontinental ballistic missile, which is scheduled in one week. After the speech, the U.S. intelligence community comes to the conclusion that Kim is deadly serious about launching the ICBM towards the Pacific. The administration makes the determination that the only way to stop the impending launch is through a U.S. military strike; two days later, U.S. Air Force and Navy assets are ordered to do exactly that.

This scenario may resemble a Hollywood thriller, but a growing number of people in the Washington foreign-policy community are increasingly of the belief that the use of force will likely be the only way the United States and the international community can prevent Pyongyang from further menacing its region and perhaps America’s West Coast. Sen. Lindsey Graham is one of those people. During a Senate Armed Services Committee hearing in December, Graham revealed that he will be introducing an authorization for the use of military force to provide the president with the statutory approval to preemptively stop Pyongyang from finishing the development of its ICBM.

Republican majority leader Mitch McConnell should simply ignore it. And if the GOP brings it up for a floor debate, Senate Democrats should do everything in their power to prevent such a resolution from passing. A preemptive strike on North Korea would be an unmitigated disaster—a military action that is much more likely to escalate into a full-blown regional confrontation with a million-man North Korean army than force Kim to tremble in his basement.

We can’t predict with certitude how Kim Jong-un would respond to such an American attack, but we can say with a reasonable amount of confidence that any North Korean retaliatory action would have deadly consequences. In case Senator Graham forgot, just shy of eighty thousand U.S. troops are stationed in Northeast Asia (fifty thousand in Japan and 28,500 in South Korea), meaning that Kim’s regime has approximately eighty thousand targets to choose from. United States Forces Korea, along the DMZ, would be on the immediate firing line, as would Seoul, a city of around ten million people in the constant dark shadow of North Korean artillery attack. Assuming that Kim would receive the message and hesitate to launch a barrage of artillery towards Japan and South Korea, utilizing some of his medium-range Musudan missiles in the process, goes against much of what we know about the young leader’s temperament and behavior over the past five years. There’s always the hope that Kim the Third would calculate that retaliating isn’t in his regime’s best interests, but hope is a pretty terrible barometer to base a strategy on.

Second, any U.S. military attack against Pyongyang’s missile silos would all but close the door to any prospect of dragging North Korea back to the negotiating table over its nuclear program. If the possibility of resurrecting diplomacy with the North Korean leadership is slim today, it would be all but impossible after a military strike that convinces Kim that his belief about an aggressive and warmongering United States was correct all along. As any North Korea watcher will tell you, the Kim regime is by nature an incredibly paranoid specimen; indeed, as the execution of Jang Song-thaek showed, the regime is constantly on the lookout for subversives, enemies of the state and traitors in its midst. Uncle Sam is the ultimate enemy; you can forget about a diplomatic resolution to the North Korean nuclear weapons problem if Kim’s country is under attack.

Lastly, it would be prudent for proponents of U.S. military force against Pyongyang to remember a simple but Confucius-like mantra: force should always be used as a last resort. As much as hawks in Washington argue to the contrary, the diplomatic option with the North Koreans still hasn’t been exhausted to its full potential. Previous diplomatic initiatives dating back to the Bill Clinton administration have been more interim and issue-oriented than comprehensive, with the ultimate carrot—a peace treaty (however tough that is to swallow)—promised sometime down the line but never substantively part of the discussion. With the exception of a short-lived moratorium-for-aid deal in the Obama administration’s first term, the last eight years of “strategic patience” have amounted to ignoring the problem and hoping it goes away. Washington would have a much better argument to make for the use of force if the diplomatic path was shut entirely. That simply isn’t the reality today.

The editor of this magazine, Jacob Heilbrunn, advised President-elect Donald Trump to sit down with Kim and hash out “peace in our time.” That’s a far better way to go than a preemptive war that would not only put tens of thousands of U.S. troops and an entire South Korean city at risk, but would negatively affect America’s relationship with China.