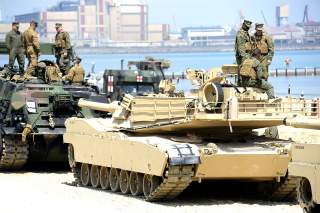 With a new president in the White House, it is the season of reviews and reassessments, with no problem more thorny than North Korea. President Barack Obama apparently told President Donald Trump that North Korea is at the top of America’s foreign challenges. As North Korea continues its missile and nuclear tests, this is almost certainly the case. The yield of the North’s most recent nuclear test has exceeded that of weapons used by the United States during World War II. The country’s missile program has dabbled in submarine-launched ballistic missiles, road mobile launchers and intercontinental ballistic missiles. If these platforms genuinely work, then North Korea could become the first new country to be able to strike the continental United States since the depths of the Cold War decades ago. Coupled with President Trump’s explosive, erratic personality, the possibility of a serious clash is greater than it has been in previous years.

There is a strong sense that North Korea lives on borrowed time. As Victor Cha writes, it is the “impossible state.” Its economy is weak. Its ostensible ideology is long since bankrupt. Its people are increasingly aware that their southern kinsmen live vastly healthier, wealthier and happier lives. The regime, for all its ferocity, is alienated from its own people whose uprising it fears. Its capital approximates a feudal city-state estranged from its own impoverished piedmont. It is extremely dependent on China for licit trade, illicit trade and financial services. Its conventional forces are technological dated. Hence the regular predictions, going back decades, that North Korea’s fall is imminent. It seems like we only need to find the final magic bullet to finally put this zombie down.

But of course, it does not collapse. Even if it violates much of what we “know” in political science and economics, it has some source of strength—extreme nationalism, a genuine belief in the Kim cult, the regime’s willingness to do anything to survive—that helps it through crises which would bring down similar nation states. North Korea has survived the end of the Cold War; the cutoff of Soviet aid; the death of founder-turned-godhead Kim Il-sung; the famine of the late 1990s; the death of the founder’s heir, Kim Jong-il; and ever-tightening United Nations sanctions. If the North has survived all this, then none of the various ideas out there for change—chasing North Korean money in Chinese banks, inward information flows, airstrikes on missile sites, more sanctions—are a likely to be a magic bullet. All are worth discussion, of course, but given what the regime has survived to date, we must admit that it will be with us for a long time. This will be a long, grinding stalemate—as it has been to date—in which the side that “hangs tough” will triumph.

Seen in that light, the Obama administration’s much-maligned “strategic patience” is not so bad after all. It recognizes that the democracies on the outside—particularly South Korea, Japan and the United States—can do little to proactively force change in North Korea. They can cut it off and harden themselves against its provocations and misbehavior, but it will be a long grind. Sanctions, missile defense, the closure of the Kaesong Industrial Complex and the crackdown on North Korea’s diplomatic relationships (which frequently double as sanctions) are necessary to slowly choke off the country and push it back to a precarious, exclusive dependence on its Chinese patron. Just as the Soviet Union was slowly internationally isolated and eventually ground to a halt, so too can the democracies of this cold war can hunker down.

The heaviest burden falls on South Korea, where the desire for the magic bullet—the solution that permits the least amount of domestic inconvenience—is strong. In the eight years I have lived here, I have always been amazed at the country’s blithe attitude toward North Korea. On one hand, it is admirable. South Koreans are far less intimidated by North Korea than American cable news crisis reporting would have you think. But that attitude has also created an insouciance that is often disturbing. My students and acquaintances would have no idea what to do if there was a North Korean missile attack. No one knows where the shelters are or takes civil defense seriously. When I tell my students that they should climb Korea’s many mountains to escape ambient radiation in the wake of a nuclear strike, they look at me in amazement that I know such macabre details. My male students regularly find their required military duty a frustrating diversion, while my female students appear shocked when I tell them that Israeli women are conscripted too. Military duty is often corroded by social stratification networking and hazing. When the previous administration sought to impose a unification tax to prepare for that eventuality, the nation revolted. North Korean defectors—immediately identifiable by their accent—are often treated poorly and slotted close to the bottom of South Korea’s social hierarchy. The South Korean government has insisted that the United States pay for installation of the Terminal High Altitude Area Defense missile defense system in the country. Cooperation with Japan on North Korea continues to be seen as a concession to an enemy, rather than a wise pooling of resources against a shared existential threat. Additionally, South Korea continues to spend far less on defense (around 2.5 percent of GDP) than it should.

It is long since overdue for South Korea to take more serious ownership of the North Korea issue, and gird itself to win a protracted, expensive and uncomfortable struggle. One possible model is Israel, a democracy hardened to win a long-term, low-intensity conflict of attrition. For example, South Korea might invest in civil defense. About 75 percent of its population lives on 25 percent of its land space—due to the mountainous terrain. That means missile and nuclear strikes could be especially devastating. This also suggests that the government finally take decentralization seriously—not just for oft-discussed regional equity, but for national security. The Seoul-Gyeonggi-Incheon corridor now contains a staggering 55 percent of all South Koreans and is the heart of the nation in every field, yet it lies right on the border with North Korea. This is astonishingly irresponsible. Such hyper-centralization makes South Korea vulnerable to a decapitation strike, given that its capital lies less than fifty miles from the border, placing it within artillery range, to say nothing of rocket range. It is long overdue for South Korea to learn from West Germany and move its capital. This greater security would also make kinetic counterstrike options after a North Korean provocation less risky. Finally, the South must consider female conscription. Its birthrate (1.2) is far below the replacement rate (2.1), steadily shrinking the force size. If North Korea is still here in ten or twenty years—and twenty years ago, no one thought it would still be here today—then South Korea will almost certainly have to find substantial new manpower.

More generally, there needs to be a greater, Israeli-style social commitment to a long, expensive conflict of attrition if South Korea truly wants to end, rather than just manage, this ongoing stalemate. North Korea is not going to soon collapse or disappear. Ignoring it or appeasing it will not make it go away or tame it either. Nor is it primarily a problem for China, the United States, the UN and so on. This is firstly a South Korean issue, and it will be costly, domestically inconvenient, time-consuming and socially fatiguing to finally throttle North Korea into collapse. “Hanging tough” worked against the Soviet bloc, even if it took forty years; hardening can work here too.

Robert Kelly is an associate professor of international relations in the Department of Political Science at Pusan National University. More of his writing may be found at his website. He tweets at @Robert_E_Kelly.