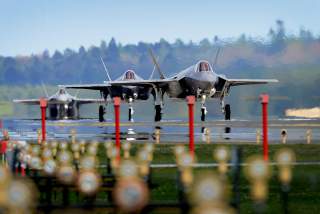 The last few weeks have been witness to a dramatic transformation in the Trump administration’s foreign policy. But perhaps not for the reason you think.

In early April, the president authorized a pinprick bombing of a Syrian military base alleged to be the source of the recent chemical weapons attack. This starkly contrasted with Trump’s insistence in 2013, following a similar chemical attack in Syria, that Obama keep America out of the bloody civil war. In fact, nonintervention against Syria was one of the few issues the habitually inconsistent candidate managed to keep to during the 2016 campaign.

In an even more flagrant change of heart, Trump met last week with NATO Secretary General Jens Stoltenberg and announced that NATO “is no longer obsolete,” reversing one of his most fervid lines in the campaign that the European military alliance is purposeless. This newfound unity with our European allies coincided with Trump’s apparent conversion from an obsequious Russophile eager for an amiable relationship with Vladimir Putin to a critic determined to show Moscow who is boss.

Finally, Trump’s outsider take on North Korea seems to have dissolved into a much more conventional view. As a candidate, Trump’s solution was as ignorant as it was fresh: if we threaten China with a trade war, we can bully it into using its leverage over Pyongyang to solve the peninsular stalemate once and for all. After meeting with Chinese president Xi Jinping and listening to ten minutes of history on Chinese-Korean relations, our unschooled commander in chief learned that things were much more complicated than he thought. Now Trump’s view appears to emphasize a harsh economic sanctions regime, ostentatious shows of force and explicit threats of preventive war should North Korea move forward with its nuclear weapons program.

What explains these drastic changes in Trump’s approach to foreign policy? One explanation says that he is simply making his way along the steep learning curve that all presidents experience. Another account puts it down to personnel. In the early weeks of Trump’s presidency, the prominence of capricious mavericks like Michael Flynn and radical nationalists like Steve Bannon produced an approach that was hostile to the experts within the national-security bureaucracy and amplified Trump’s policy illiteracy. Now, with Flynn ousted and Bannon marginalized, the ascendency of mainstream Republican foreign-policy views held by people like Defense Secretary Jim Mattis, National Security Advisor H. R. McMaster and U.S. Ambassador to the United Nations Nikki Haley have come to dominate the White House’s approach to the world.

There is no reason to doubt either explanation. Both certainly have played a role in recent weeks. But there is another, more fundamental explanation that goes to the root of what motivates state behavior, and especially leaders like Trump: the drive for status and prestige. In assuming the presidency, the most powerful and esteemed office in the world, Trump now sees things much differently.

Status and prestige motivations are pervasive in international politics. Hans Morgenthau wrote early on of “the policy of prestige.” Robert Gilpin defined it as “the reputation for power.” According to David Markey, the prestige motive is “the individual or collective desire for public recognition of eminence,” and “one of the central causes of conflict in international relations.”

It has often led to war, and frequently at the expense of more material interests. Richard Ned Lebow, in his book Why Nations Fight, found that of ninety-four interstate wars fought between 1648 and 2008, 58 percent were fought for status and prestige, and another 10 percent for revenge. He found only 25 percent were motivated purely for security or economic interests.

What tangible benefit did the punitive strike against the Assad regime yield? None. It had no strategic or humanitarian purpose. It was a purely symbolic gesture. Even if it did deter the further use of chemical weapons, so what? Syrians are no less vulnerable to the Assad regime’s brutality. And the limited nature of the strikes means it neither had, nor was intended to have, any impact on the balance of power in the civil war.

But it did serve the thirst for prestige on two levels. First, it reinforced America’s status as the indispensable nation, the unipolar power and the policeman of the world. That status confers on the United States “informally legitimated rights and responsibilities.” Any state can attack another to secure its national interests or defend its sovereignty, but only the United States uses military force to punish rogues for violating international norms. Trump bombed Syria to maintain that American prerogative. As Tudor Onea has written, dominant powers often respond to symbolic challenges that “raise a question mark as to its will or ability to hold its status.”

And on a second level, this served Trump’s need for prestige in the domestic sphere. As Xiaoyu Pu and Randall L. Schweller have explained, “International status signaling often arises from a domestic political struggle for legitimacy.” The president rose to power as an outsider desperately in need of establishing political legitimacy in Washington, DC. In the aftermath of the strike, a vast array of pundits, elite commentators and politicians on both sides of the aisle, who typically lambaste Trump, suddenly heaped praise on the president for using force. His approval rating in the polls also inched upward several points. The Syria strikes satisfied Trump’s need for domestic acclaim and recognition.

The Trump administration’s threat of preventive military action against North Korea is similarly lacking in strategic justification. This crude deterrence model—that enemy states become docile peaceniks in the face of such threats—is a chimera. It’s more likely to lead to a spiral dynamic. If anything, convincing Pyongyang of our willingness to initiate preventive war will only harden its determination to obtain a nuclear deterrent.

But North Korea’s defiance of the international community, and of the United States as South Korea’s patron, is intolerable for a superpower obsessed with its status and prestige. Threatening war and sending an aircraft carrier strike group off the North Korean coast are taunts meant to restore America’s honor in the face of Pyongyang’s insolence. Tangible security objectives are secondary.

What about Trump’s sudden embrace of NATO? Prestige can explain that too. In fact, club membership is a major symbol of status in the hierarchy of nations. Our leadership of NATO and role as protector of Europe is a conspicuous marker of high rank that indicates America’s “reputation for power.” For the United States, membership in NATO doesn’t enhance territorial security or deter foreign threats. It certainly overlaps with genuine security justifications, but, like being a permanent member of the UN Security Council, it is more a symbol of our status as a global power.

Take Trump’s proposal for a $54 billion increase in defense spending as another example. As far as anyone can tell, this dollar amount was plucked out of thin air. It doesn’t reflect specific strategic requirements. Instead, boosting military spending, as a New York Timesreport put it, reflects Trump’s “fascinat[ion] with raw military might, which he sees as synonymous with America’s standing in the world.” Trump, the report continued, “has shown a flair for symbols and showmanship. By building the world’s most expensive weapons systems, he repurposes them as symbols of power.”

A foreign policy driven by status and prestige concerns is strategically unwise, and can be very dangerous. First, it subordinates tangible security and economic interests, which actually matter, to intangible image maintenance, which matters much less. Compounding this problem is the fact that costly status-motivated policies are always justified in security and norm-oriented language, so policymakers and the public buy into them.

Second, status and prestige motivations encourage activism at a time when U.S. foreign policy should be more restrained. The United States still has the biggest economy and the most powerful military in the world, by a long shot. With weak neighbors to the north and south, big oceans to the east and west, and a superior nuclear deterrent, the United States is remarkably insulated from foreign threats. To secure its core interests, it doesn’t need to have a sprawling military presence around the globe, pose as the policeman of the world, or intervene willy-nilly in far-off countries for the sake of peripheral interests. But status and prestige inspire an activist foreign policy and spurn the moderation that would allow the United States to husband its power and avoid getting sucked into wars of choice.

Unfortunately, Trump is the ideal candidate for using foreign-policy activism to satisfy status and prestige. If anyone thought these past few weeks of interventionism might be anomalous in the course of Trump’s presidency, think again.

John Glaser is Associate Director of Foreign Policy Studies at the Cato Institute.