To Stop North Korea, Deterrence Will Beat War Every Time 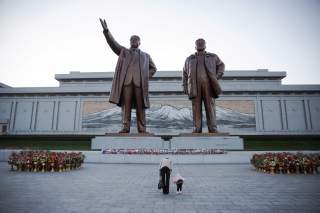 Secretary of State Rex Tillerson has been roughly treated by the White House of late. Perhaps that explains his dismissal of the possibility of deterring North Korea, a military midget compared to Joseph Stalin’s Soviet Union and Mao Zedong’s China.

When asked why it was not possible to contain the far weaker Democratic People’s Republic of Korea, he responded: “The difference is that with the past behavior of North Korea, it is clear to us that they would not just use the possession of nuclear weapons as a deterrent. This would become a commercial activity for them.”

In fact, the DPRK’s past behavior proves no such thing. Selling conventional weapons is not the same as marketing nuclear technology; dealing with governments is different from supplying nonstate actors. And selling nuclear materials is less likely when major powers are alert and target such behavior.

Moreover, while North Korea’s record is odious, it is no worse than that of Joseph Stalin’s Soviet Union and Mao Zedong’s China. Nothing about those murderous dictatorships predisposed them against selling nuclear secrets. Perhaps they preferred to enhance their relative power by keeping the nuclear club small, but that offered the United States no guarantee. Both seemed uniquely disdainful of international norms, especially those advanced by America.

In any case, if Pyongyang is inclined to further proliferate, why hasn’t it been doing so while expanding its arsenal? Tillerson certainly would have released any evidence he possessed of nuclear sales. (Thankfully, so far the administration has not followed the George W. Bush administration in offering a fanciful tale concocted by a well-paid expatriate like Ahmed Chalabi.) Kim Jong-un apparently recognizes that some actions would be too dangerous to justify even a generous pay-off.

If the administration so fears nuclear sales, its emphasis on sanctions obviously is counterproductive, even reckless. Stepping on the North’s economic windpipe necessarily forces the Kim regime to take desperate steps to breathe. If that includes proliferation, Washington is contributing to the problem. Pursue negotiations with Pyongyang, which leave North Korea a less dangerous way to raise revenue, and it likely would choose that path.

The secretary’s comments look particularly odd given how the United States responded to Pakistan’s promiscuous proliferation. Iran and Libya, as well as North Korea, are thought to have benefited from Islamabad’s aid. (That government unconvincingly blamed nuclear scientist A. Q. Khan for acting without its knowledge.) The Bush administration appeared to be more concerned over Islamabad supporting the Taliban than with its opening an international Nukes-R-Us.

But exposure, backed by any private threats, led Pakistan to shut the nuclear supermarket. Without giving up its nukes or being bombed, Islamabad ended the illicit commerce. Past behavior did not determine the future.

Even so, in this regard the administration still might worry more about Pakistan than North Korea. Some observers fear that Pakistan may offer Saudi Arabia a bomb if the latter ever chooses to take that route. Worse, Islamabad could inadvertently become a source of nukes for an Islamic terrorist group. The Pakistani state is highly unstable; civilian rule is weak, the military answers only to itself, radical jihadists drive public opinion and politically the country resembles an active volcano. If Pakistan blows, there will be a mad scramble to grab its nuclear weapons, technology, scientists and more.

“We simply cannot accept a nuclear-armed North Korea,” announced Secretary Tillerson. There is good reason to not want the DPRK to possess nukes. But while Washington can refuse to “accept” a nuclear North, the administration doesn’t have realistic means to prevent North Korea from becoming—or, more accurately at this point, remaining—a nuclear state.

Pyongyang has consistently denied any interest in negotiating away its nukes. The North has spent too much and come too far to do so. And the Kim dynasty also has tied its legitimacy to its weapon developments. At the same time, a nuclear arsenal offers substantial security benefits.

Even tougher sanctions aren’t likely to change the North’s position. Its leaders have a high threshold of economic pain, especially when mostly paid by common people. At least a half million North Koreans died of starvation in the late 1990s without forcing the government to change policy. Despite Washington’s mix of requests, pleas and demands, China so far has refused to risk creating a failed state, and turning a reunified Korea into an American military base, by attempting to strangle the DPRK economically.

Which leaves military action. Everything could go splendidly, as Tillerson and those advocating war apparently expect. That is, after all, what we were assured about Iraq. But conflicts rarely end up being cakewalks as promised. And none of America’s recent opponents possessed WMDs.

In North Korea, it’s unlikely the United States knows where all the nuclear essentials are situated and can reach everything it can locate. Moreover, the threat of retaliation is extremely high. Indeed, given Washington’s proclivity for regime change, Kim Jong-un would be foolish to rely on American assurances that any assault would be limited. The result almost certainly would be a serious conventional war in which South Korea would be a battleground, and the DPRK could hit South Korea, Japan and American possessions such as Guam with missiles carrying biological, chemical and perhaps nuclear weapons. Nukes on Seoul and Tokyo would result in horror unseen since World War II. Combat could overflow into China and Russia.

Moreover, the political and economic consequences would radiate around the world. After “victory” the United States might find itself an international pariah, hated even by its onetime South Korean and Japanese allies, while tasked with paying to rebuild both South and North Korea—and perhaps much more. Being seen as responsible for an unnecessary nuclear war might trigger startling geopolitical realignments, handing regional predominance to China. Widespread physical destruction and economic disruption throughout Northeast Asia might pop what some analysts view as an international bubble economy, resulting in a replay of 2008.

Containment and deterrence constitute an imperfect strategy. Deterrence can fail. Mistakes can happen. Still, despite some tense moments nuclear deterrence worked remarkably well over the last seven decades. To plunge into the abyss because war could happen anyway would guarantee untold horror in return for the dubious promise of preventing an even worse conflict sometime in the future. The administration would be wagering hundreds of thousands—or even millions—of lives on a geopolitical long shot.

The United States can’t accept a nuclear North Korea, said Secretary Tillerson. But unless he has a response which won’t result in a catastrophic war, the administration can’t stop a nuclear North Korea either. Washington shouldn’t blow up the peninsula after helping to keep the peace for more than sixty-four years.

Doug Bandow is a senior fellow at the Cato Institute. A former special assistant to President Ronald Reagan, he is the author of several books, including Tripwire: Korea and U.S. Foreign Policy in a Changed World, and co-author of The Korean Conundrum: America’s Troubled Relations with North and South Korea.