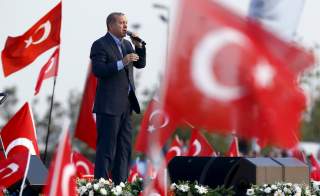 While no one quite believes the two governments will come to blows, U.S. policymakers are deluded or lying when they assert America’s and Turkey’s unity of purpose. After visiting Ankara, Secretary of State Rex Tillerson declared: “We’re going to act together from this point forward. We’re going to lock arms. We’re going to work through the issues that are causing difficulties for us and we’re going to resolve them.”

However, the threat of open conflict between the two governments is real, and demonstrates the extent to which they have diverged. The differences continue to grow with every new day and military operation. Rather than sacrificing American values and interests, Washington should drop its fantasy expectations and establish a more realistic relationship with Erdoğan.

Successive administrations have been denied Turkey’s evident estrangement. Ankara remains in NATO and the U.S. Air Force remains at Incirlik Air Base, but little else binds the two governments together. The relationship is but a ghost from the past.

The Cold War is over, and Russia isn’t going to attack Turkey—or any other NATO member for that matter. Indeed, after tumultuous relations with Moscow over the shootdown of a Russian aircraft, Erdoğan has steadily improved ties to Vladimir Putin. Ankara even is purchasing S-400 antiaircraft missiles from Moscow, undermining alliance efforts to improve interoperability among members. It would be foolish to assume that Turkey would live up to its alliance commitments if Russia ended up at war with America or Europe.

Moreover, Ankara has actively thwarted U.S. objectives in Syria. Focused on ousting the Assad regime, for years Erdoğan’s government allowed Islamic State personnel and materiel to cross the Turkish border. There even were credible accusations that Erdoğan’s son was involved in the illicit oil trade with ISIS. Only after the group staged terrorist attacks in Turkey did Ankara take a more actively adversarial role, and even then it prioritized countering growing Kurdish influence over opposing the “caliphate.”

In launching the ironically named Operation Olive Branch against Kurdish military forces that were allied with Washington against the Islamic State, Turkey wrecked Trump administration plans to create a Kurdish “border security force” to police Syria’s north. A cavalcade of Turkish officials lamented their lack of trust in Washington, and threatened to attack American personnel stationed alongside Kurdish forces. U.S. officials whined that Ankara’s policy was not “helpful,” as if that were the Erdoğan government’s objective.

Turkish foreign policy has also turned hostile elsewhere. Under Erdoğan, Turkey’s relations with Israel turned sharply negative. And the Turkish leader once promoted rapprochement with Greece, and some observers hoped for a similar approach to Cyprus, which Ankara invaded in 1974, occupying more than a third of the island to create an ethnic Turkish state. But the Erdoğan government has increased tensions with Athens over nearby Greek islands that it covets, and declined to make concessions to end the Cypriot standoff.

Erdoğan’s interest in joining the European Union, assuming it ever was real, has ebbed; with Syria’s collapse, he turned refugees into a weapon of extortion against Europe. He shifted from protecting the liberty of Islamic faithful in public to pushing Islamism on the public in a region where Islamist extremism is a threat. After seeking to end the Kurdish conflict at home, he helped reignite the fighting, which continues to ravage Kurdish areas in Turkey. He blockaded Iraqi Kurds after their independence referendum last fall and, most recently, launched military multiple operations against Syrian Kurds.

Finally, slowly at first but rapidly after the failed coup in July 2016, Erdoğan constructed an electoral dictatorship. He began his premiership as an ally of liberals seeking to eliminate Atatürk’s authoritarian trappings dating back to creation of the Turkish republic. Kemalism enshrined nationalism and secularism, and was ruthlessly backed by the military.

However, Erdoğan long ago tossed aside concern for anyone’s rights but his own. Freedom House judges Turkey to be unfree. Ankara leads the world in imprisonment of journalists, with more than seventy in jail. The State Department published a seventy-five-page report on the government’s human-rights abuses, including unlawful killings, torture, lack of due process, mass imprisonment, infringement of free expression, inadequate protection of civilians in military operations, prison overcrowding and more.

Of the state of emergency, which remains nearly two years after the attempted putsch, observed Amnesty International, “Dissent was ruthlessly suppressed, with journalists, political activists and human-rights defenders among those targeted.” Most recently, the government jailed critics of military operations against the Kurds; at least thirty activists were arrested for their comments on social media, which were termed “propaganda for armed terrorist organizations.” Academics, opposition politicians and schoolchildren also have been targeted for the mildest of criticism of the man who would be sultan.

Torture continued as security forces enjoyed impunity. More than fifty thousand people were detained, many on the most ludicrous grounds, such as possession of a U.S. dollar bill, supposedly a sign of membership in the alleged conspiracy operated by Muslim cleric Fethullah Gülen. Others were arrested for having an account at a public bank owned by the Gülen organization. Among those detained were Taner Kılıç and İdil Eser, the chair and director, respectively, of Amnesty International Turkey. Erdoğan essentially admitted that American pastor Andrew Brunson had been arrested in an effort to force a trade for Gülen, who resides in Pennsylvania. Europeans have been detained for similar purposes.

Observed Hugh Williamson of Human Rights Watch, “Everywhere you look, checks and balances that protect human rights and rule of law in Turkey are being eroded.” Some 140,000 people have lost their jobs, private as well as public, and many have been made unemployable. Numerous critics have had their passports seized, turning Turkey into an open-air prison. Abuses continue to worsen.

Erdoğan took his brutal tactics to America, personally unleashing his security detail on peaceful protesters near the Turkish embassy in Washington. Protected by diplomatic immunity, his thugs injured several demonstrators, some seriously. Far from being apologetic, Erdoğan blamed the Trump administration for allowing people to criticize him.

Tillerson acknowledged that bilateral relations were “in a bit of crisis.” Actually, more than “a bit.” Despite conciliatory language between Tillerson and Turkish foreign minister Mevlüt Çavuşoğlu, and an agreement for a dialogue over policy differences long evident, neither values nor interests continue to hold the countries together.

The electoral calendar makes conciliation even less likely. Erdoğan’s ruling Justice and Development Party has lost public support of late, and therefore entered into an alliance with the Nationalist Movement Party for next year’s parliamentary contest. The latter is secular, but even more committed to a brutally aggressive foreign policy. Erdoğan can ill afford to make concessions to America, which already is hated at home.

Amanda Sloat of the Brookings Institution advocated fixing the bilateral relationship “before it’s too late.” But it is already too late. Better for the nations to separate, with Ankara leaving NATO. Then the two governments could forge a more practical and transactional relationship, focused on areas of cooperation. There would be no lectures on human rights, fantasies about shared objectives and complaints about the failure to agree. Just an effort by the two governments to work together when possible, despite their many differences.

Turkey no longer is an ally. The bilateral relationship never was vital. It barely survives today. There’s no need for Ankara and Washington to be adversaries. But everyone concerned would benefit if the two governments dropped the pretense of friendship that now camouflages their vast differences.