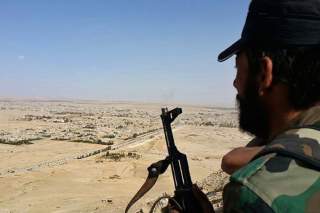 Nobody who has been monitoring the civil war in Syria or who has watched raw footage from civilians and rescue workers can come away from the videos and photos unscathed. The nearly six years of war in Syria have produced so much destruction to the country’s society and so much unaccountability for the political leaders and commanders directing the bombing that one wonders whether the international system is broken beyond repair.

Attempt after attempt by Secretary of State John Kerry to salvage a cessation-of-hostilities agreement with the Russians has become the butt of jokes in Washington conservative circles. Foreign Minister Sergey Lavrov is mugging Kerry and taking his lunch money every single day; he leaves negotiating sessions with confidence, but then quickly realizes that his confidence was misplaced; he’s a masochist who enjoys being humiliated by the Russians in public—the quips go on and on. Much of this is political innuendo made by Republicans in Congress (think Sen. John McCain), who live each and every day to criticize President Obama’s foreign policy. But the sentiment underneath the critiques is real; on Syria, diplomacy equals stalemate and gridlock. In the interim, thousands of additional Syrians are killed.

Diplomats are trained to roughen up the edges when addressing public audiences. But Syria has forced these very same diplomats to embrace some hard truths about the conflict—even if John Kerry and his European colleagues prefer not to acknowledge it.

1. Bashar al-Assad and Russia are Winning

When Vladimir Putin ordered Russian jets into Syria’s skies, President Obama predicted, somewhat confidently, that Moscow was stepping into another Afghanistan, circa 1979. The Russians, the administration claimed, would quickly find out the hard way how monumental a task they decided to take on. The Russians may be successful in using their air power to kill Assad’s enemies and stanch its gains on the battlefield, but the pilots responsible for keeping the Syrian strongman afloat will eventually recognize that their strikes will inflame the opposition, draw more foreign fighters into the conflict and put a giant bull’s-eye on Russian civilians.

Those predictions haven’t turned out to be prescient. We still hear administration officials talking about Moscow entering a quagmire that it will not be able to get out of, but that blurs the fact that Putin has for now provided the Assad regime with a long lease on life. The Russian air force is now an extension of the Syrian military, and tactically has enabled Syrian troops and progovernment militias with the type of air support that Syrian pilots could not offer. East Aleppo, one of the most symbolic bastions of the opposition, would not be pulverized to such an extent if it weren’t for Russian planes in the sky dropping ever-powerful Russian munitions. With every Russian attack, Assad’s government is afforded a better position on the ground and more leverage at the diplomatic table.

2. The Russians Have More At Stake in Syria

The relentless, weeks-long bombardment of Aleppo has unleashed a wave of humanitarianism in the corridors of power in Washington. The split on Syria policy in the Obama administration is palpable, with John Kerry pushing for more U.S. military involvement than President Obama and the National Security Council staff are comfortable with. The drums of humanitarian intervention are banging much louder in Washington today than they have at any time since the 2013 chemical-weapons attack outside Damascus.

Nobody likes watching buildings being demolished, children being pulled from the rubble and the dictator ordering it all safely ensconced in the presidential palace. It’s a humanitarian abomination—scenes that jar the mind. But however horrific the footage is and powerful calls for U.S. military action are, the reality is that the Russians have a lot more at stake in Syria than the United States does. This is not to dismiss U.S. inaction or the arguments of those in the Obama administration and on Capitol Hill who are urging for the creation of a no-fly zone or safe zones. Rather, it’s an acknowledgment that Moscow has a four-decade-long defense relationship with the Assad regime that it’s trying to save, and Russian naval and air assets that it wants to hold onto. Moscow is pouring more military resources into Syria than the United States has or likely ever will. Indeed, Assad may be a bloodthirsty dictator and an Iranian lackey, but he’s also someone who the U.S. could largely ignore or marginalize as it pursued its other interests in the region. For Russia, Assad is the head of a regime that keeps the Islamic barbarians away from the Damascus gates.

3. The Security Council Is On Life Support, and So Is International Law

Assad has exposed the U.N. Security Council and perhaps the entire U.N. bureaucracy over the past five-and-a-half years as paper tigers. Bombing hospitals, medical workers, doctors, apartment buildings, marketplaces, mosques, funerals, bakeries and every other civilian target under the sun has resulted in zero indictments from the International Criminal Court, zero productivity in the Security Council for a resolution to the conflict and no accountability towards international justice. The entire U.N. system, it seems, has broken down; resolutions under Chapter 7 of the charter aren’t followed, humanitarian supplies are purposely blocked by the Syrian government as part of its war strategy, and the Security Council’s permanent members are so divided on who is primarily at fault for the breakdown of previous ceasefire agreements that any notion of diplomatic progress is exceedingly elusive.

Bashar al-Assad is succeeding where others, like Slobodan Milosevic and Saddam Hussein, failed: repeatedly making the Security Council look impotent and childish at the same time as he is directing a scorched-earth policy on his own country. Even Milosevic, whose forces burned Sarajevo and Srebrenica to the ground, had to eventually contend with U.S. airpower after three years.

The Assad regime made a concerted decision to throw out the Geneva Conventions in order to fight this war. Bombing hospitals, schools, mosques and bakeries to dust was only part of the strategy; surrounding neighborhoods or districts with an opposition presence, sealing off escape routes, and withholding any food, water or medical care from going into these areas was and remains perhaps the second-most important tactic that the Syrian army has levied throughout the war. What occurred in Daraya, Homs and Moadamiyeh—a mass evacuation of the remaining armed fighters and their families after years of besiegement in exchange for a return of government control—exemplifies just how cruel but successful these tactics have been. All the crying from the United Nations and human-rights community falls on Assad’s deaf ears, particularly when he gains ground from being inhumane.