Syria: A Preview of What Is to Come in North Korea? 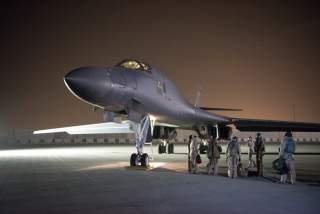 Last Friday’s joint American, British, and French air campaign against three Syrian regime chemical weapons facilities was undertaken with an explicit goal in mind: sending an unambiguous message to Bashar al-Assad that he uses sarin and chlorine gas at his own peril. The operation was limited in scope and precise in its targeting—so precise, in fact, that not a single fatality was recorded after the raids. Addressing reporters once the operation was complete, Defense Secretary James Mattis made it clear that the missile attacks were a “one-time shot” designed to deter Assad from tapping into his chemical weapons program in the future.

While Bashar al-Assad was the primary target, he was not the only adversary paying attention to what was happening last weekend. Indeed, for many in Washington, President Trump’s decision to hammer the Syrian regime was one element of a more comprehensive game plan in which Assad was a relatively minor figure. In the more hawkish corners of the D.C. think-tank universe, the attack on Syria was about more than keeping Assad honest and punishing him for breaking the chemical weapons convention: it was about showing the international community that American credibility means something and that other adversaries—like North Korea’s Kim Jong-un- should take the White House seriously when it issues threats. As former George W. Bush speechwriter and American Enterprise Institute resident fellow Marc Thiessen wrote in the Washington Post, “By acting decisively in Syria, Trump also has an opportunity to send a message not just to North Korea but also to China that he is not bluffing when he threatens to act against Kim’s regime.”

Unfortunately, Thiessen’s argument is the best case scenario. President Trump did indeed deliver a message to the North Korean leader’s doorstep, but the notoriously paranoid Kim Jong-un likely interpreted the missive far differently than columnists in the Beltway hoped. Far from giving Trump more leverage in his upcoming nuclear talks with Pyongyang, the strikes against Assad more likely convinced the North Koreans that it would incredibly stupid to negotiate their nuclear weapons away. Raining missiles on the outskirts of the Syrian capital is further confirmation to Pyongyang that they could very well in the same precarious position without a nuclear weapons stockpile and the capability to deliver them.

How can we be sure that the North Korean regime views last weekend’s actions in Syria through this prism? Of course, we can’t know for sure; North Korea is the hardest of hard targets, a nut the U.S. intelligence community has been unable to crack despite decades of effort. But we do have some evidence from North Korean Foreign Ministry officials and from Kim Jong-un himself that U.S.-led military action over the last fifteen years has given Pyongyang good cause to be concerned about its survival without a nuclear deterrent. Dan Coats, the Director of National Intelligence, was absolutely correct when he remarked last year that the North Korean government has learned a big lesson over the past decade and a half about the necessity of a nuclear insurance policy, particularly when a government happens to be a prime adversary of the the most militarily powerful country on the planet. And the obvious lesson in Coats’ own words is “If you don't have them, get them.”

Luckily for Kim Jong-un, he doesn’t need to get nuclear weapons. He already has them. And thanks to Trump’s missile attacks on the Syrian government, he will be that much more reluctant to get rid of them under any circumstances. The nuclear deterrent is so important for the preservation of the Kim regime that Washington could offer the moon and the stars—a peace treaty, diplomatic normalization, a U.S. troop withdrawal from South Korea, and an end to all economic sanctions—and Pyongyang would still have reason to refuse the full, complete, and verifiable denuclearization the Trump administration is demanding.

Simply put, Kim Jong-un doesn’t want to be pulled out of a spider howl and tried for crimes against humanity like Saddam Hussein, be assaulted and executed like Muammar al-Qaddafi, or go through the indignity of sitting in a bunker somewhere and absorbing the occasional U.S. airstrike like Bashar al-Assad.

President Trump continues to have high hopes for his meeting with the North Korean dictator later this spring. He markets himself as a master haggler with unlimited negotiating superpowers, someone who can sit down in the same room with anyone and walk out with an unbelievably great deal for the American people. Trump may very well believe in his heart of hearts that he can talk Kim into dismantling his nuclear weapons program by the root while at the same time maintaining Washington’s traditional security alliances with South Korea and Japan. For those who study geopolitics and the Korean Peninsula for a living, that kind of optimistic thinking was always comical to begin with, partly because of Pyongyang’s shoddy history of abiding by agreements and the inherently mercurial and conspiratorial nature of the North Korean regime. If the nuclear talks do indeed occur, the most the Trump administration is likely to get from the North Koreans is a freeze on additional nuclear work and a cap on warheads, two concessions that would be practically impossible to verify without an expansive regime of international inspections.

But by launching punitive airstrikes on Assad’s chemical weapons program, Trump made that task even harder. Kim Jong-un has one more compelling incentive to hold his nukes tightly.

Daniel R. DePetris, a fellow at Washington-based think tank Defense Priorities. He is a columnist for the National Interest and the American Conservative. Follow him on Twitter at @dandepetris.

Image: A U.S. Air Force B-1B Lancer and crew, being deployed to launch strike as part of the multinational response to Syria's use of chemical weapons, is seen in this image released from Al Udeid Air Base, Doha, Qatar on April 14, 2018. U.S. Air Force/Handout ​